Fresh off the back of a Modern-packed weekend in the form of the SCG Regionals, Modern lovers worldwide have been blessed (or cursed) with another weekend jammed full of Modern data to analyze. Grand Prix Brisbane, Grand Prix Vancouver, the SCG Modern Classic in Baltimore—we’re getting to the point where there’s almost too much information out there. Two weekends of high-level Modern play in one month is undoubtedly a great thing for Modern players everywhere, or is it? 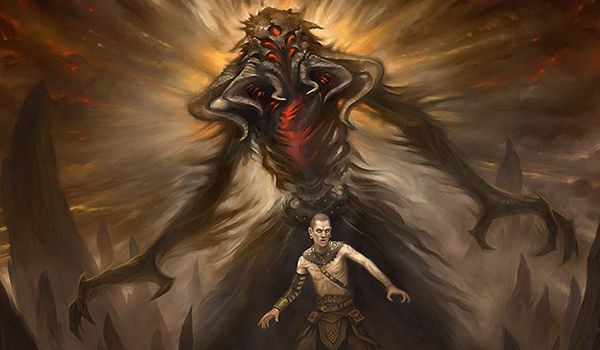 996 players descended upon Brisbane, Australia, all searching to make their mark in a fresh, post-banning Modern landscape. For those unfamiliar with the Australia Magic scene (and I count myself among that number) don’t scoff at that turnout. 466 players attended the last Modern Grand Prix in Brisbane in 2013. One of them played Jin-Gitaxias, Core Augur. Enough said.

The Top 8 for Grand Prix Brisbane is as follows:

Golgari Grave-Troll is gone, but that still leaves Cathartic Reunion, Conflagrate, Bloodghast, Prized Amalgam, Insolent Neonate… I could go on and on. Yes, losing a dredge-six tool is a hit to the consistency of the deck, but it seems that the recent printings of Cathartic Reunion and Insolent Neonate more than make up for it. Remember, those cards weren’t around the last time Dredge was putting up results. Cathartic Reunion was the card that finally pushed Dredge over the top, not Golgari Grave-Troll. It’s only one event Top 8, but 2nd and 3rd makes a good case for Dredge being back, for the time being at least. Well, that’s awkward. 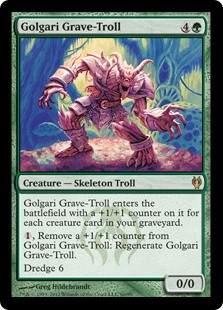 We have to be careful not to overreact to these results, however. Dredge did nothing at Regionals, which does more to ease my mind than a strong performance here makes me worry. It’s possible that everyone just left their graveyard hate at home (assuming Dredge was gone for good) which let it creep back into play and take a weekend event by surprise. If a portion of the format needs to play some amount of graveyard hate to keep Dredge at bay, that’s still healthy, assuming said graveyard hate actually does enough to keep Dredge at bay. Pre-banning, just having the Relic of Progenitus didn’t kill them. They could reload easily with ease, slowed by only a turn or two. Still, I’d suggest keeping an eye out. I’ll be paying much more attention to MTGO Modern League results in the coming weeks. If Dredge representation starts to creep back up, we might have a problem. For now, that’s as far as I’m taking that topic.

Fresh off of placing just two copies into all twelve Regionals Top 8s combined (and neither of those Top 8s converting to the Top 4), Jeskai Control is back with a vengeance. It took down the Classic in Baltimore and even won at least one tough matchup in Bant Eldrazi. What’s going on here? Let’s dig a little deeper…

Oh, hello there Kiki Jiki, Mirror Breaker. Didn’t see you there. Against a more diverse, slightly slower field (thanks to the exodus of Infect and Dredge), Kiki Jiki and Restoration Angel is not a bad endgame, and a strong plan A against a variety of opponents. Live a little, bide some time, attack for a million damage. Contrast this with other Jeskai Control plans of attack: hope they can’t kill Nahiri, the Harbinger, hope Saheeli Rai is good enough, kill them with boredom... 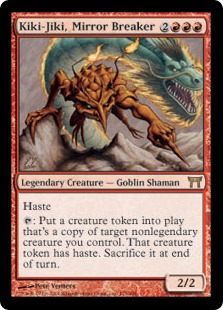 Really though, this deck owes most of its success to just how good Wall of Omens is at the moment. When Jeskai Control doesn’t have to worry about killing every little thing, Path to Exile and Lightning Bolt become a lot better. Wall of Omens will be awkward against a non-zero number of opponents, but the same can be said for Terminate and nobody questions that spell. Joseph Blizzard made a point with this finish, and that point is this: “No matter what the conditions are, someone, somewhere, will always be there to ruin your day with control.” Thanks for yanking me back on the bandwagon.

The big story out of Grand Prix Vancouver is the Josh Utter-Leyton/Gerry Thompson/Sam Black team deck in the form of Death’s Shadow Aggro. Not since Pro Tour Paris have I seen domination such as this. For those that missed coverage, do yourself a favor and scrub through some of the replays. Josh Utter-Leyton wasn’t qualified for the PT, Gerry scooped to him when they were both 11-1, all three teammates cracked the Top 4, I could go on and on. Really though, the biggest story is the tech…

This incarnation of Death's Shadow Aggro had been putting up results in MTGO League events for a few weeks prior to the Grand Prix, but these finishes on the highest stage with the archetype (by strong players) solidifies its legitimacy. With the loss of Gitaxian Probe, some thought Death's Shadow would disappear along with the likes of Infect and Dredge. Losing an important piece of the “self-mutilation combo” and good matchups in the form of Dredge and Infect, Death's Shadow appeared to be a third (free) casualty of the bannings…until now. 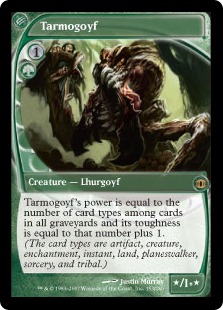 If you’re looking for Become Immense and Temur Battle Rage, you won’t find them here (or at least in large numbers). Wild Nacatl, Monastery Swiftspear and Steppe Lynx/Kird Ape are gone as well, replaced with Tarmogoyf, Liliana of the Veil, and Fatal Push. Yes, two Temur Battle Rage exist, but here they are more of a four-plus-point burn spell than half of a combo to put the game away.

The main difference between this Death's Shadow list and previous versions lies in identity. Kird Ape became Tarmogoyf, gaining power in exchange for speed. Losing Gitaxian Probe hurt both consistency and velocity, making the “turn one Death's Shadow” dream just that, a dream. Where the goal used to be to play one-drops quickly, rip answers from the opponent’s hand, and kill them before they could gain their footing, Death's Shadow Aggro has shifted into a slower, more patient aggro strategy. Where we used to be attacking with a 3/3 Wild Nacatl and a x/x+1 Monastery Swiftspear for two mana, we’re now using that two mana to cast Tarmogoyf, or Traverse the Ulvenwald for Death's Shadow.

Tarmogoyf is, of course, excellent in this archetype, which employs all the usual card types along with Tarfire and Liliana of the Veil to both pump our Goyf and activate delirium for Traverse the Ulvenwald. Death's Shadow was always far and away the best creature in the previous versions of the deck, and that remains true here as well. Exchanging access to another threat for more virtual copies of Death's Shadow in the form of Traverse wouldn’t work in previous versions of the archetype, but it does here.

Three-drops were non-existent in previous versions of Death's Shadow Aggro (Dismember doesn’t count) but this version uses Liliana of the Veil and Kolaghan's Command to maximum effect here. How do we make Thoughtseize and Inquisition of Kozilek better? More discard! How to we solve our weakness of having only 8 creatures? Get some back! Yes, we’re only playing 8 “good” creatures, but with Traverse the Ulvenwald and Kolaghan's Command the virtual number of copies goes up significantly.

The big question I always ask when I see a new version of an archetype perform well is why we haven’t seen it before. This might sound like a pointless exercise, but I’ve found value in analyzing not only why a deck performed well, but how that version of said deck came to be. What was stopping this version of Death's Shadow from putting up results pre-banning? 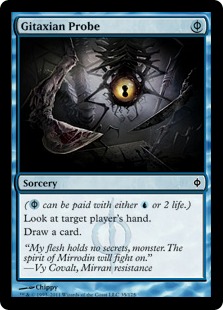 A solid place to start, of course, is Gitaxian Probe itself. Given the opportunity, I’m sure Team CFB Fire would have preferred the powerful free spell. Free information, an extra card in the graveyard to power delve/delirium, life cost that actually is a benefit to us—Gitaxian Probe did so much more than the surface effects of the card would suggest. Effectively reducing deck size to 56 cards for free was multiplied by similar cards like Street Wraith and Mishra's Bauble, which was invaluable when we were digging for creatures or the other half of our combo. Without access to such a powerful form of velocity and consistency, the archetype would be forced to slow down, so embracing this change rather than fighting it and becoming merely a worse version of a previous deck is a strong move.

The other answer, of course, is Fatal Push. Very old versions of the archetype played Path to Exile—the deck is strong, and fast, but sometimes you just have to kill a creature. We are better against opposing Tarmogoyf’s in this version, but prior versions had trouble with opposing Goyf’s out of Jund, and sometimes had to slow down opponents across the metagame in certain situations. Path to Exile was a necessary evil, brought about because we couldn’t afford to play too many Dismember, and Dismember wasn’t even where we wanted to be against decks like Affinity, Merfolk, and Burn.

Enter Fatal Push. Kill anything for one mana has no drawback, assuming we are in a position to spend that mana without argument on removal. Prior versions of the deck were unhappy doing anything other than playing, pumping and defending creatures. Slowing down, while forced by the removal of Gitaxian Probe, could actually be considered a blessing in disguise if embraced correctly.

When we’re already set up to play a slightly more restrained game in the maindeck, alternate angles of attack like Lingering Souls and Ranger of Eos out of the sideboard can be much more helpful. Ranger of Eos is old tech, of course, but it plays better here than it ever did before, where four mana was often a nightmare scenario that came about all too often for previous versions of the deck. Jund was by far the worst matchup historically, but this version has me excited to play Jund to see how things have changed. I’m certain the matchup is still tough (any archetype full of removal, disruption and efficient, powerful creatures will always be difficult) but Goyfs of our own, Kolaghan's Command, and Lingering Souls out of the board definitely help our case.

Looking at the lists on a macro level, we’ve actually come all the way around to being a more all-in, four-color “Aggro Jund” strategy. Traverse the Ulvenwald draws Dark Confidant parallels, but it's better than Dark Confidant could ever hope to be, getting us exactly what we need, immediately, for one less mana. At the end of the day, we are employing almost the same “kill, disrupt, attack” strategy that Jund plays, just on a much, much more efficient scale.

Death's Shadow Aggro took GP Vancouver by storm, that much is clear. This new version of Death's Shadow combines the strengths of the old with newfound consistency, power and resiliency. Graveyard hate slows it, but doesn’t kill it outright. With Dredge (possibly) out of the format, can decks afford to pack graveyard hate for this deck and not lose points across the board, especially considering that graveyard hate is only part of the puzzle to beat this deck? Brisbane showed us that Lantern Control is still making noise, but maindeck Kolaghan's Command (along with a fast, proactive gameplan) should be more than enough to give Lantern Control strategies a run for their money. Is Burn enough to keep this new Death's Shadow Aggro deck down? Or are we looking at a new/old king of the format? Let me know in the comments below!

17 thoughts on “Weekend Recap: The Shadow of Death”