Death's Shadow Jund's metagame shares seem to have decreased a little since last week, indicating that Modern has the tools it needs to combat the new boogeyman. This reassuring development has been met with universal praise from the pro community and relief from the playerbase. The deck's presence in Modern still changes its landscape, though, and I tackled its potential implications in a piece last week. 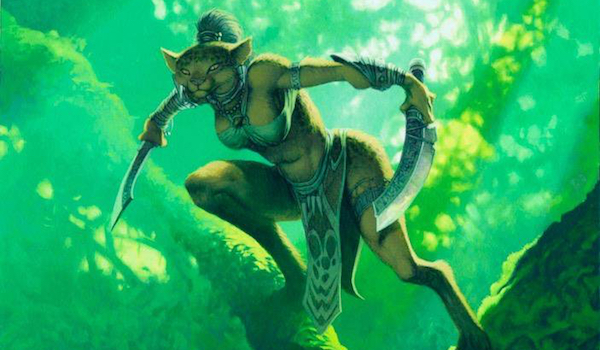 Today, we'll look at some of Modern's existing Death's Shadow decks and consider some other paths the strategy can take to adjust to the format's ever-shifting metagame.

My efforts with Sultai Shadow last week yielded a deck with a gameplan similar to that of Death's Shadow Jund, but less efficient and reliable when it came to execution. Testing has shown me that when it comes to clock plus disruption, the Jund shard happens to have all the tools it needs without requiring a splash. The main reasons to splash, then, would be to gain edges in the mirror, or in especially bad matchups.

Those closely following the deck's developments will notice it's nearly identical to Gerry Thompson's most recent list, the difference being two Surgical Extractions over a Nihil Spellbomb and a Kozilek's Return in the side. I came to the list on my own, but had a pair of Liliana, the Last Hope in the main; after reading Gerry's article and trying Veil in her place, I agree with his assessment that she's dead in fewer matchups and therefore a stronger consideration for the mainboard.

When I wrote about Sultai Shadow last week, I rattled off its ability to easily disrupt combo decks via Stubborn Denial as a primary strength. Surgical Extraction serves a similar purpose in Death's Shadow Jund. Nihil Spellbomb has more raw power in the mirror, but Extraction has more utility elsewhere, and shores up the combo matchups I was worried

about without blue. As for Kozilek's Return, I found the Affinity matchup to be fine with this build, so Return wasn't a card I ever considered.

Between our mainboard discard spells and sideboard Fulminator Mages, it's common for unfair opponents to have a key piece of their combination sitting in the graveyard at some point, be it Past in Flames, Ad Nauseam, Urza's Mine, Valakut, the Molten Pinnacle, etc. Extraction can then disrupt these decks magnificently by removing all copies of that spell from the game without costing us mana, meaning we can continue to develop our board. The life loss, of course, doubles as an enabler for Death's Shadow. It also beats graveyard-reliant combos without requiring any setup, including Finks-Seer-Melira and Goryo's-Griselbrand.

A final point I want to make about the mainboard here is its inclusion of two Temur Battle Rage. Jadine Klomparens wrote a few days ago that Battle Rage is a relic of the Probe-fueled Death's Shadow Aggro decks, and will soon be phased out by better players. I don't quite agree with this sentiment. As noted by Emma Handy, Rage gives the deck a backdoor combo with which to beat opponents out of the blue (more on the ensuing "Splinter Twin effect" in last week's piece). Emma perceived that as players learned to play against Death's Shadow Jund, they would respect the combo less, since a single Temur Battle Rage isn't very reliable on its own. My solution last week was to abandon the instant altogether, but another solution is to simply play multiple copies, essentially forcing opponents to respect it.

Besides, Battle Rage has uses other than simply threatening a lot of damage: it's great against chump blockers, for instance, and it can help get over larger defenders. Rage helps us race in scenarios where hitting for six every turn won't cut it alone. It's also a hilarious answer to Deflecting Palm—we can simply respond with Rage, take first strike damage from our own Shadow, grow the Shadow as a result, and then hit our smug Burn opponent for surely-lethal!

To Jadine's credit, Rage is still pretty miserable against removal-heavy decks without many blockers (such as Grixis and other reactive blue shells) and the mirror—it remains one of the least reliable plans in the deck, even in multiples. Other strains of Death's Shadow, like Grixis, omit the instant from their lists entirely.

Despite my inevitable "coming around" to Death's Shadow Jund, I remain especially interested in blue tempo decks that make use of the Avatar. Ryan Overturf's 4th place Grixis Delver list from the Indianapolis Classic two weeks ago seems like a fine place to start.

We'll compare this build of Grixis Delver to Death's Shadow Jund by looking at its relative strengths and weaknesses.

With the benefits of leading on a creature identified, I wondered if there wasn't a way to include an aggressive one-drop in Death's Shadow Jund. Doing so would greatly accelerate our clock against faster linear decks, such that we no longer needed to rely on Temur Battle Rage there, and theoretically grant us more resilience to removal. More than that, the ability to lead on a one-drop makes our disruption significantly better.

Bauble and Wraith are too integral to the structure of Death's Shadow Jund to work with Delver of Secrets // Insectile Aberration. But we've seen Jund lists easily splash white in the past for Ranger of Eos, Lingering Souls, Kataki, War's Wage, and others. So I decided to try the other three-power, one-mana creature in Modern: Wild Nacatl.

I cut the deck's least essential/reliable components for four copies of Wild Nacatl. For reference, here are the mainboard changes I made to Death's Shadow Jund:

The following sections discuss Wild Nacatl's pros and cons against different Modern strategies. We'll only consider strategies that can prove problematic for Death's Shadow Jund (removal-stocked attrition shells, linear combo strategies, and the mirror) and leave out the easier matchups, which I think will usually be won with or without Nacatl.

Wild Nacatl is one creature I pegged as potentially getting a boost from the rise of Death's Shadow Jund, since Lightning Bolt is terrible against that deck but great against Wild Nacatl. Notably, Jund itself can't remove Nacatl easily, since Tarfire doesn't kill it. When it dies right away in the mirror, then, Nacatl at least absorbs a high-value removal spell like Fatal Push (at parity), or a Liliana of the Veil minus-two (which incidentally gives us a window to get value from our own Tarfire).

In a Star City Games article from this week proclaiming that Modern is Magic's best format (ha ha, us Nexites have known this for years), Todd Stevens defines a healthy metagame as, "one in which, once the best deck in the format is identified, it's no longer the best deck, meaning that the format has the ability to correct and regulate itself."

What that means for the Death's Shadow deck is that it's likely to undergo plenty of small transitions as the metagame adapts to fight it. In other words, a set of Nacatls this week might become a more planeswalker-centric build another week, which might become a permission-inclusive blue-based version another week. I don't know about you, but I'm plenty excited to discover the forms Modern's newly-discovered Goyf clone assumes in different metagames.

14 thoughts on “Exploring Death’s Shadow in Jund, Grixis, and Zoo”