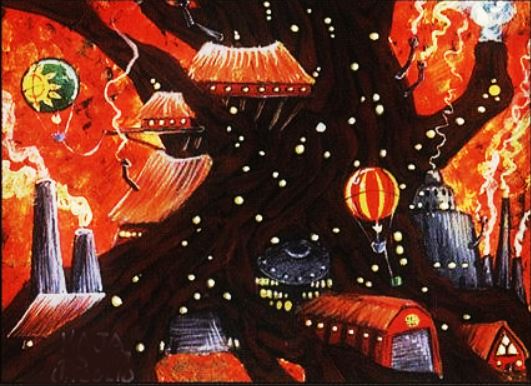 Last week I talked about a classic Magic set that doesn’t get the appreciation it deserves, given the rising value of numerous cards in the set. The set was Fourth Edition, and I noted that the best-selling card from the set on TCGplayer was Mishra's Factory. 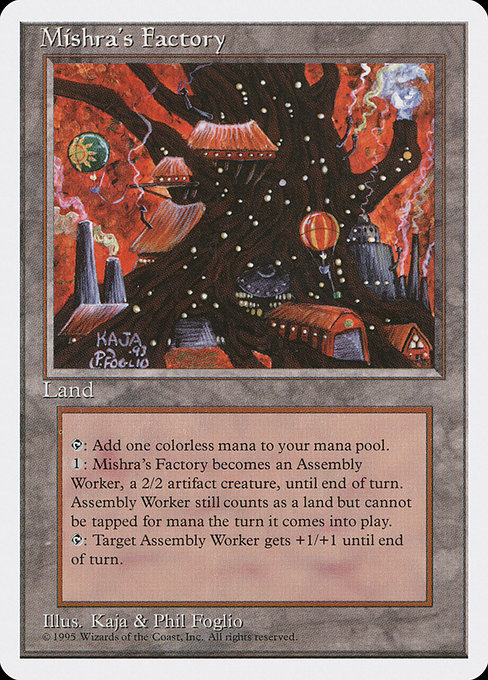 Since writing the article, the card doubled from about $1.50 to over $3. Was this a coincidence, or did “greedy speculators” target the card after reading about it in my article? Am I to blame for the sudden increase in the Old School staple?

Or how about the crazy-high asking prices now being listed on Revised Royal Assassin? I wrote about Revised cards too, and now TCG Mid on the card is $47! That makes little sense given Unlimited copies are cheaper, but this price manipulation can only occur when stock of a card gets very low on TCGplayer. Did I catalyze the Revised buyouts as well?

When I first bought into cards from Magic’s first two years, I did so with two primary motivations. First, I was eager to try out the budding '93/'94 format. Second, I had an appreciation for the older cards and wanted to own some to appreciate in my collection. Even now a few years later, I leaf through my Old School binder and admire the unique artwork, the dark images, the giant font, and the amusing wording on some of the first-printed cards. Weakness is still one of my favorites. 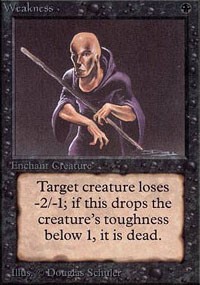 Wait a second. This is a double negative. If you lose -2/-1, aren’t you effectively gaining +2/+1? The card also contains the first version of a "reminder text," telling you your creature is dead if its toughness drops below 1. Funny enough, Wizards decided to revisit the “dying” terminology as opposed to “creature going to the graveyard,” so in a way this card was ahead of its time!

Anyway, people who got into these older cards over the past three years have seen tremendous returns on their investments. For a while, the price appreciation felt organic as new players expressed interest in the Old School format. But recently, this has gotten far out of hand. Market manipulation has gone beyond just buying a few extra copies for a potential future deck. Instead, investors with deep pockets are buying up dozens or hundreds of copies of preciously rare cards, causing prices to enter the stratosphere.

This newfound demand doesn’t feel organic. It is a small population of people buying up all copies they can, leaving behind only the most egregiously overpriced copies, causing price charts like the one for Jihad above.

Did my writings create these buyouts? I doubt it. These heavy investors saw an opportunity—low print runs, Reserved List, highly collectible cards—and they acted accordingly. I always advocated the best time to buy an Old School card for a deck was yesterday. But I never suggested buying out copies and going deep. This behavior makes the Old School format prohibitively expensive, strangling the healthy growth it was experiencing artificially. The format’s growth is self-limited, of course, but that limitation has been tightened artificially by these market manipulators.

Now that I find myself locked out of some of the coolest cards in the game, my attitude towards these manipulators has soured. While I used to dismiss their behavior with an arm-wave, citing capitalism, I now feel it’s a true shame these amazing cards can’t be appreciated by players alongside collectors and investors. Instead, those with excess disposable income are scooping up copies, locking out players like myself who would only want one or two copies. I know this is a controversial topic, but I wanted my new stance well-known to this community.

“But Sig, every time you write about an Old School card, we see these buyouts occur. Aren’t you just as much to blame for encouraging people to buy into preciously rare cards?”

The above question is very fair to ask. It’s easy for me to observe a market trend and flag it, thereby adding fuel to the buyout fire and exacerbating a price spike. But I would argue that my writings are merely correlated to buyouts rather than causal. In fact, the same can be said for many other MTG finance communications and publications. Most of us are merely messengers. Allow me to explain further.

When I flag trends in the MTG finance world, I’m not creating a brand new catalyst to spike markets. Most often I’m alerting people to market movements that are already in process. For example, when I identified Fourth Edition Mishra's Factory as a card on the move, it was already the number one seller of the set. People were already buying the card aggressively before my article went public.

Now, it’s certainly plausible that after my article went live, a few people followed my advice and grabbed a personal playset or two for future use. But since there weren’t many Near Mint copies on TCGplayer to begin with, we were already one perturbation away from the tipping point for this card. Don’t forget, though, that there are hundreds of played copies still available for purchase. People could be targeting the LP and NM copies in an attempt to manipulate MTG Stocks. Don’t take the bait.

Those who grabbed a few copies managed to acquire them most cheaply, and hopefully those who didn’t pull the trigger don’t care about the card. It should be that simple.

If I started driving up hype on some obscure, low print-run Arabian Nights card—especially one with little or no utility—my actions would certainly merit more scrutiny. Identifying cards that are already on the move may accelerate trends slightly, but for the most part I’m merely a messenger of what’s already taking place in the market.

Now that I’ve established my stance on this market manipulation, I wanted to flag a few more trends that are worth your attention. These aren’t cards to buyout, but if you want copies for personal use or for your collection, you may want to consider picking up copies soon. I say that not to drive hype or to catalyze manic buying, but to help collectors and players get a couple cards they’ve been wanting before they are forced to pay twice as much.

First, Mirage Reserved List cards are on the move. This is evidenced by the recent spikes on MTG Stocks.

Once again, this is speculative buying and manipulation—there’s no way organic demand for these cards support such prices. Most people probably don’t even know what a card like Wellspring does! 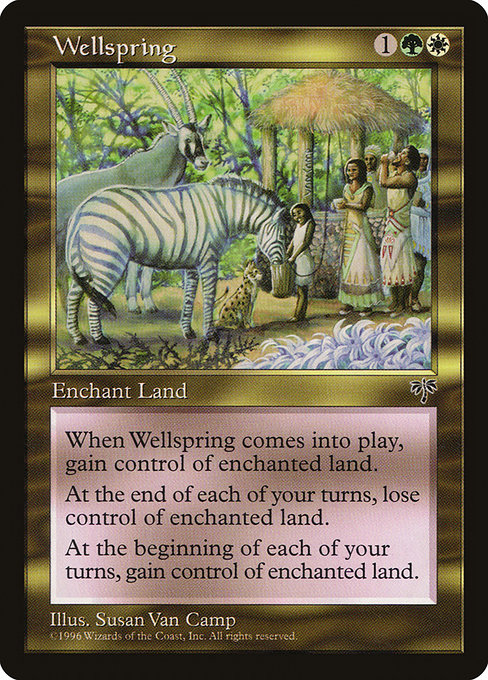 Yet the supposed price of the card is $4 now. Sad thing is, given that this is a Reserved List card I could easily see this price stick. Card Kingdom is already paying $0.80 for Near Mint copies, and if they remain out of stock for too long they’ll increase that number. Those who got copies for under a buck will be rewarded. This is the crazy market environment we’re dealing with.

My advice is to acquire some near-bulk Reserved List Mirage rares while you’re shopping on TCGplayer. You could even sort by best-selling from the set to see what’s likely to pop next. You could also look to Visions and Weatherlight—the other two sets in the block—for viable targets that likely have even smaller print runs. If you’re buying for $0.30-$0.75 and you’re just picking up a few copies, you won’t break the bank and you’ll have a shot at making a few quick bucks.

Another trend popping up on MTG Stocks again and again involves Arabian Nights commons and uncommons. No matter how terrible the card is, copies in nice condition are selling out. I don’t know if this is driven by collectors scrambling to finish sets or more market manipulation (probably the latter) but nice copies of War Elephant are actually drying up. I suppose as people reach deeper into the well, these are practical targets. Since I try to stick to cards I may actually use, I will probably ignore this trend myself.

Lastly, I can’t ignore the recent movement on dual lands across the board.

There has be an end to this upward trend eventually. In the stock market, hype tends to cause a stock’s price to overextend beyond fair value before retracting. I anticipate this will happen with dual land prices as well. I just don’t know where the peak is. My advice is to trim your position as we approach GP Las Vegas and the team Pro Tour, but to keep a core position in case the retraction is negligibly small.

Some MTG personalities do deserve blame for market manipulation. They advocate hype while trying to sell cards and product at elevated prices.

However this behavior is not characteristic of your typical MTG finance person. I would contend that my writings may be correlated to market movement, but there’s not causation beyond a small spurt in interest. Most frequently I write about trends that are already in process; a few people may latch onto an idea after reading my content, but these people were likely to be buyers of said cards anyway and they were merely prioritizing differently.

Looking forward, I will continue to flag trends I come across, even at the risk of backlash should my articles create temporary tailwinds for these trends. It’s impossible to write about something and have zero impact, and I refuse to ignore market trends out of fear of accelerating them a tad. It’s worth it to ensure my readers are aware of these trends so they can acquire copies they want for their decks/collections before prices jump.

With that established, I wanted to raise awareness of three recent trends I’ve noticed: Mirage Reserved List buyouts, rising prices of Near Mint Arabian Nights commons and uncommons, and the (admittedly more obvious) steady increase in dual land prices. The first I recommend buying into, the second I’d ignore unless you’re a collector, and the third I’d recommend trimming your position.

It’ll be interesting to see how the market evolves as we enter a traditionally slow season for MTG finance: the summer. Will students ignore the game over the summer? Will players find outdoor activities to appreciate, eschewing their card game hobbies for the time being? Will we see a drop in prices? Only time will tell if things will unfold that way. But if you’re collecting these older cards and enjoying them in Old School or other casual formats, it really doesn’t matter in the short run. I still see a long-term trajectory that’s upwards and to the right.