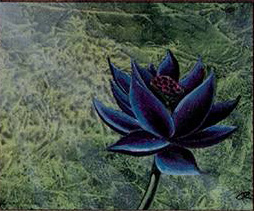 I truly love the QS Insider Discord. I’m not just saying that to drive subscriptions, either. I genuinely appreciate the discussions, ideas, and insights that private chat room brings to my daily MTG finance analyses.

This past week was no exception.

Fellow insider Tarkan and I found ourselves engaging in a lively debate regarding the scalability of Magic finance. He seemed to be of the opinion that there was ample “market capitalization” in cards, citing Dan Bock’s recent Facebook post regarding the Reserved List. (I’m paraphrasing, so hopefully he’ll chime in and correct me if I misspeak).

I, on the other hand, believe that someone with seven figures of capital would have a very difficult time efficiently getting into and out of the MTG market.

But what do we mean by “market cap”? What did Dan Bock specifically say? Does the math he performed in that Facebook post hold up? This week I’m going to do a deeper dive into this debate and further flesh out my stance—that MTG finance is self-limited due to its scale relative to other asset classes. If that doesn’t interest you, feel free to skip towards the latter part of the article, where I’ll dwell briefly on some more actionable info for the week!

Twitter has been abuzz lately about the Reserved List. Some things never change. We should update the old saying to say, “Nothing is certain in life except for death, taxes, and disagreements over the Reserved List.” I don’t know if Dan Bock was responding to any particular discussions or comments, or if he found inspiration elsewhere. Regardless of the catalyst, he published an inspiring (to me) piece about the Reserved List. It’s long, but I’d highly recommend everyone read through it.

Within his post, he did some math: multiply the average value of the top 289 Reserved List cards by their print runs and you get over $3.5 billion. That’s billion with a “b." I don’t trust other people’s math, so I decided to do a quick litmus test on the calculations below.

Okay, I don’t have to do any more math than this—I firmly believe in Dan’s numbers. I went through three cards and am already approaching $300M. I’m sure adding the other dual lands and Power 9 from Alpha, Beta, Unlimited, and Revised, and I’d get to that $3.5B number easily.

Dan’s article goes on to explain many factors and considerations regarding the Reserved List. But remember: this article isn’t a Reserved List article. It’s about the scalability of Magic investing. Tarkan’s argument was that the market cap of MTG singles is sufficiently high to enable a millionaire’s investing in Magic singles. And in a vacuum, he’d be right.

But let me provide some context.

Imagine a wealthy individual—for example the youngest billionaire Kylie Jenner—suddenly decided they were tired of the stock market’s volatility and uncertainty, and that they wanted to invest in a non-traditional asset. Perhaps Kylie saw Eric Froehlich’s recent interview where he mentioned Magic, and she decided that would be a worthwhile investment idea. She starts by seeking out “Black Lotus” since that card was specifically mentioned in the poker article.

Kylie sits down at her computer, opens up Google, and searches, “buy Magic: the Gathering cards.” The first non-advertisement to show up is Card Kingdom, followed by TCGplayer. So she visits Card Kingdom, searches “Black Lotus”, and gets the following results: 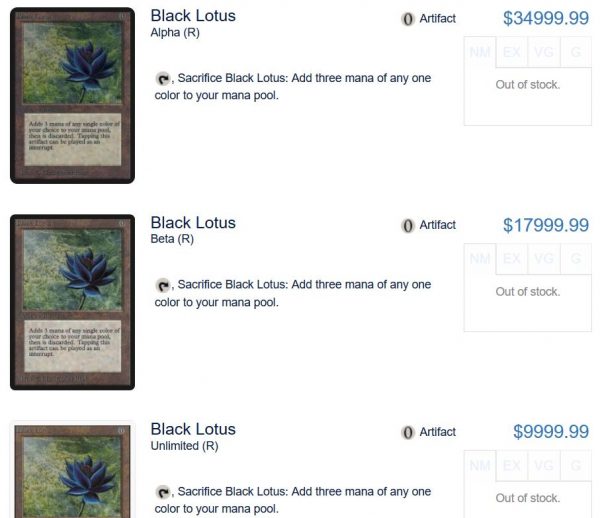 Okay, so much for investing deeply on Black Lotus. Next she tries Underground Sea. There are over 300,000 in existence across its multiple printings, so maybe she can pick up a few hundred of them. 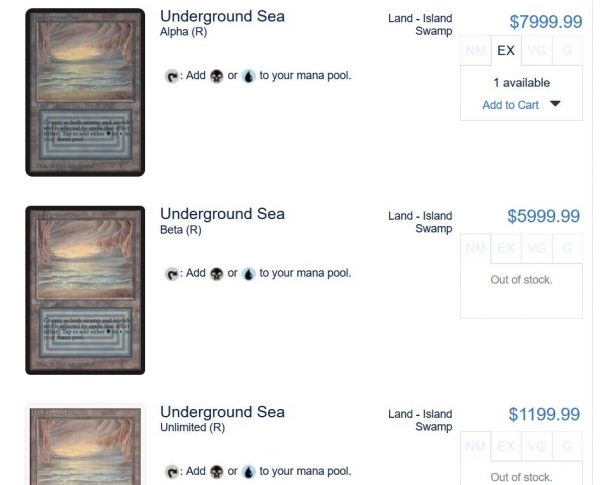 She could go to TCGplayer next and get more copies. But would the Damaged and HP copies be worth investing in? Probably not. That nets 55 sellers, which still equates to a solid $36,000 worth of Revised copies. But this isn’t the net buy-in. Because only the first couple dozen copies are $600. If someone wants to buy more, they have to pay $700 for some copies. And $800. And $900. Is it wise to pay 50% more to keep sinking money into Underground Sea? Perhaps not.

This is the first issue I have with trying to scale into Magic. By spending a modest amount of money in your investment, you can end up manipulating the price quite a bit. If you want to buy $1 million worth of a single stock, you can choose from hundreds, if not thousands, of options where your purchase would barely move the needle of that stock’s price. That opportunity doesn’t exist in Magic. Spending $1 million on a card like Underground Sea would cause its price to go from $600 to $1000 overnight. To make such a large investment would require your willingness to keep buying as the price ratchets higher and higher.

You could of course spread your money across hundreds of different Magic cards, but then you run into a different issue: effort. If you’re a wealthy individual looking to invest in something, do you really want to have to handle hundreds or thousands of individual pieces?

Even if you decided to clean out Underground Sea, you’re stuck holding nearly 100 copies of the card and that would only soak up about 1% of your planned $5 million investment. You’d have to repeat this type of buy 99 more times to get into a ballpark where the investment is sizable enough to be worthwhile. Are there even 99 more cards worth targeting?

Then there’s the issue of selling. Stores may react to the newfound demand and raise prices. You may be able to unload some copies at a higher price point. But the demand for $1,000 Underground Seas is going to be less than the demand at $600. That’s simple supply and demand. You can’t possibly believe you’ll be able to sell 100 copies of that card at once. Not without tanking its price, anyways. You’re going to have to bleed these out over the course of many months or even years. That’s a lot of individual transactions to keep track of.

Let’s face it: Magic is tiny. $3.5 billion sounds like a huge market cap, but it doesn’t hold a candle to other, more established collectible investments. If you want to sink $5 million into comic books, for example, you could do so by purchasing a relatively small pile of comics. You could start here, buying this $615,000 comic. There are a couple dozen options that are over $100,000 to choose from. And some of the higher grades of the iconic comics can fetch seven figures by themselves.

Sure, there is a Magic eBay listing for a $2.2 million card. But do you trust that kind of money from a seller with 119 feedback named “dumb_mother”? That listing aside, there are only four other Magic listings in the six-figure range. The tiny number gets me wondering, though, if any of those listings are actually worth that much. Probably not. At least, not yet.

Comics have been around much longer than Magic, and therefore have a higher pedigree. The same can be said for baseball cards, which can often sell for six figures. Or old coins (a 1793 Chain Large Cent in nice condition can sell for over $100,000 and as high as $450,000). Or artwork. Or rare pieces of jewelry. Or antique furniture.

All of these investment ideas scale fairly easily. Purchasing a few pieces can be a convenient way of investing millions into a beloved hobby. Then after some number of years when its time to sell, the process of liquidating those few assets should not be too cumbersome.

Magic just isn’t there yet.

Magic isn’t there yet, but it could get there one day. If the card game is around another 25 years, I could certainly see Alpha Black Lotus selling for hundreds of thousands of dollars. In fact I could see Alpha anything selling for quite a bit. The print run of that set is so unbelievably small.

As long as Hasbro and Wizards of the Coast don’t mess things up too badly, Magic will gradually become a more realistic investment vehicle. For now, it’s a great place to park some money for a regular Joe/Jane. But I don’t think high-end investors with millions to put to work should consider moving in on Magic. Not yet, anyways.

Wrapping It Up and Some Ideas

I promised some actionable ideas, and I’m not one to back out on a promise.

More and more Rerserved List cards from 1996 and 1997 are getting targeted. It may be wise to start grabbing a few copies of anything with under 100 sellers remaining on TCGplayer, just to get some exposure in case they spike. Jungle Patrol is getting thin in stock. Catacomb Dragon is the top selling rare from Mirage.

Elkin Lair is just now spiking (I play that card in my casual Commander deck). From Weatherlight, Tolarian Serpent is starting to move. Heart of Bogardan looks especially fragile. 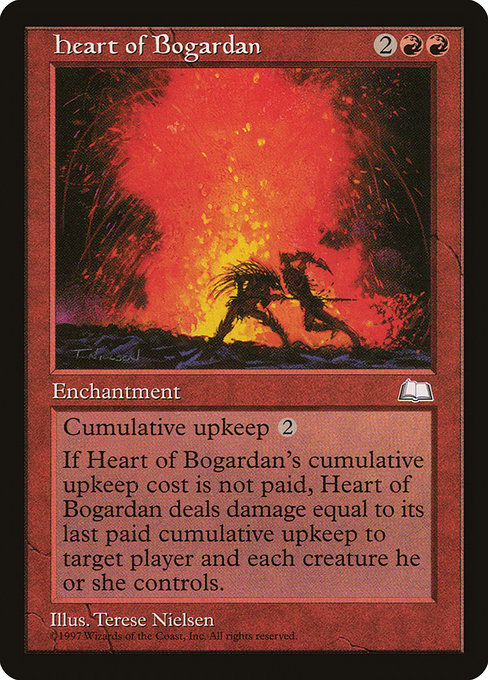 Again, I don’t advocate buying out the market on these. But next time you’re making your TCGplayer purchase, you may want to add a couple of these just to have in case. I know I keep coming back to the Reserved List well over and over again, but this is a space that continues to see action nonstop. It would be foolish to completely ignore the trends.

Lastly, I still think there’s an opportunity with Unlimited rares. I’ve been picking some up from Card Kingdom in Near Mint condition simply because ABU Games pays more on their buylist. There’s a large disconnect between these two vendors, and I’m inclined to believe the stock on NM Unlimited rares will run out before ABU Games feels enough pressure to drop their buy prices. Even garbage like Purelace, Deathlace, and Web are selling out on TCGplayer lately. Perhaps people are picking these up for easy arbitrage to ABU’s buylist.

These are all ideal targets because they have great long-term investment potential while also offering minimal downside risk due to ABU’s aggressive buylist. While Alpha and Beta cards start to run away from us, Unlimited becomes the next logical target. They aren’t worth your time if you have millions to invest, but for small time folks like us they seem perfectly positioned.