Preparing for Grand Prix Detroit this weekend has been an odd experience for me. Leading up to a tournament, I am usually scrambling to figure out what deck to play. It is not uncommon for me to switch decks in the week leading up to a tournament. For GP Detroit though, I have been locked in on Affinity from the moment my team decided to go. It is the deck I have the most experience with in Modern, and now with The Antiquities War, I believe it's one of the best choices for any Modern tournament. 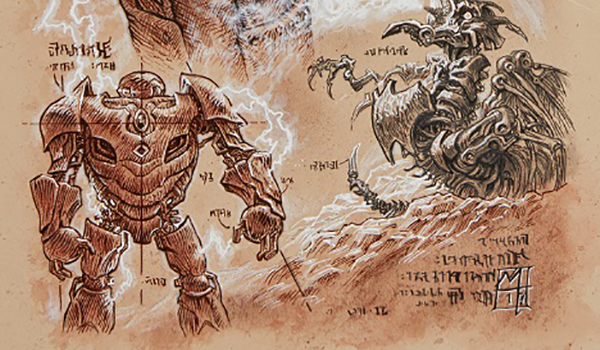 In this article, I'll share some of my preparation for the Grand Prix, and lay out why I believe The Antiquities War is so well suited to Affinity.

Unified Constructed has a warping effect on a metagame. When only one person on a team may play a specific card, decks that overlap with relatively few other decks go up in value. Since these decks are easy to slot into any team's lineup, this tends to raise their popularity in the metagame. Compared to an individual Modern tournament, you can reasonably expect to play against them more often.

People will often talk about the Mox Opal slot on a team. By its name, this refers to any deck playing the card Mox Opal. The decks to choose from for the slot are Affinity, KCI, and to a lesser extent Lantern Control. Affinity’s maindeck does not overlap with any other deck in Modern outside of Mox Opal, and the sideboard can be constructed without overlapping with the other two decks on the team. 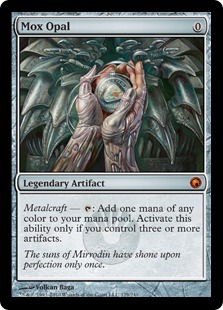 KCI overlaps a little more with Ancient Stirrings. That means Tron is out, but it still leaves a lot of options open. Lantern Control is a bit of an outlier due to Thoughtseize and Inquisition of Kozilek, which greatly limit which fair decks the team can play alongside it.

When trying to predict the metagame for GP Detroit, I want to look at decks that fit into both categories: little overlap and recent success. The first deck that comes to mind is Humans. This deck has been putting up results for quite a while now and mostly plays cards no other deck in Modern wants, with the exception of Noble Hierarch and Aether Vial. I expect the vast majority of teams to have a Humans player, thusly inflating the metagame percentage to the 20-25% range. 20% is much higher than any deck in an individual Modern tournament, so every team should be ready for it.

The other deck that I expect to be popular is UW Control. It has done well in quite a few of the recent Modern tournaments. The overlap is minimal outside of other blue control decks (the main cards being Path to Exile and white sideboard cards in Rest in Peace and Stony Silence). I do not think that UW will be as popular as Humans, but a large chunk of teams will have it in their lineup.

Finally, the big outlier deck that fits into the above criteria is KCI. Even though it does not overlap with other decks and has shown a lot of success, the barrier to entry is too high for the deck to be popular. The deck is very difficult to pilot, and not nearly as many players are drawn to that type of deck as to Humans or UW.

Given my beliefs about the metagame composition, my main priority in deck selection for GP Detroit is to have three decks with a collectively favorable matchup against Humans and UW. This does not mean that all three need to be favorable individually, but that should be true of at least two of the three. For me, I would like to be on Affinity. I strongly believe the Humans matchup to be favorable, and the number of Izzet Staticaster and Kataki, War's Wage in Humans sideboards have been trending down, making the matchup better. 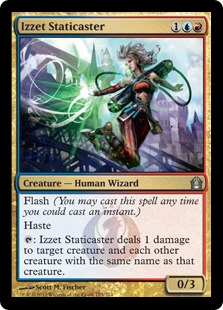 I also believe the UW matchup to be favorable. UW is no longer playing Spreading Seas—this card may not seem like it would impact the matchup much, but it played a critical role. The typical play pattern is that UW is forced into wrathing or losing, and you can sometimes finish up the game post-wrath with creature lands. Previously with Spreading Seas, that plan did not work.

As for the other two decks, I would go with Tron and Infect. Tron is known for having good matchups against fair decks like Humans and UW. Infect is a bit of a dark-horse pick, but it was only a few months ago that it won a Star City Games Invitational. I have been playing the deck a bit recently and I have been liking both matchups. So if I could ignore things like pilot skill or deck preference, then I would happily sign up the team of Affinity, Tron, and Infect.

Nearly every Affinity list I see is playing Karn, Scion of Urza. Now, I think Karn is a very reasonable card to play in Affinity, but there's another four-mana card from Dominaria that I consider strictly superior: The Antiquities War.

I was pretty skeptical about The Antiquities War at first. It seemed slow. I was unsure how often the final chapter would win you the game. It was unclear if it was any better than Karn. In fact, I did not even bother trying it until a friend told me how good it was. Now after playing with the card in many leagues on Magic Online and in multiple tournaments, I am thoroughly convinced that every Affinity player should have this card in their deck. The card is very real and, in my opinion, is what puts Affinity over the top as a choice for GP Detroit. 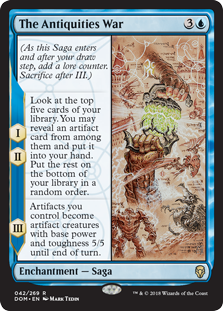 Evaluating The Antiquities War is fairly nuanced and relies on two assumptions. It must be castable, and it must reliably win you the game in a reasonable time frame.

For assumption one, four-mana cards are castable in Affinity. The deck plays 25 mana sources, 13 of which are colored sources. That is more than enough to have a few fours on the top end of the curve. This is evident in the wide adoption of Karn.

For assumption two I think it is safe to assume—in contrast to my initial thoughts—that if the third chapter resolves, you will win the game in nearly all situations. Affinity is known for dumping its hand on the table, and the third chapter really takes advantage of having more permanents than your opponent. War even gives you two additional artifacts to ensure you are ahead. In addition, the majority of your manabase is comprised of artifacts. So while your opponents' lands are sitting there not impacting the board, yours are 5/5s threatening their life total. Affinity even plays eight mana accelerants in Mox Opal and Springleaf Drum. The deck can frequently cast War on turn three, and sometimes even turn two, further pressing the advantage.

Comparison with Karn, Scion of Urza

Since sagas function as mini-planeswalkers, comparing these two cards is pretty straightforward. Karn and Antiquities War have two main points of comparison. The first is between Karn’s -2 and War’s first two chapters. The second is between the turn after Karn has made two Constructs, and the turn when chapter three goes off.

The difference in power level between making a large Construct and looking at the top five for an artifact are much closer than they would seem. Making a Construct is immediate and somewhat comparable to casting Master of Etherium. It is consistent at what it does, and will always put a lot of pressure on unfair decks. War’s first two chapters will not consistently put on that same amount of pressure, but it digs ten cards deep to find a Cranial Plating or Arcbound Ravager, which will often threaten to kill the opponent. I would give a slight advantage to Karn’s -2, but it is fairly close.

After playing with The Antiquities War in many matches online and in paper, I can report that the third chapter has very rarely failed to win the game that turn. Even in the rare cases it did not, it left the opponent with no creatures and at a very low life total. I think it is safe to make the assumption that The Antiquities War reads very close to, "Suspend two: win the game." If that is true, then The Antiquities War is going to be quite a bit better than Karn the majority of the time.

Some other notable bonuses in favor of Antiquities War:

When deciding what artifact to take from the first two chapters there is one question that should be asked. Can my opponent deal with The Antiquities War? If they cannot, then prioritize taking cheap artifacts to maximize the number of artifacts on board. However if you suspect they can answer it, then simply select the best artifact. I have taken an Ornithopter over Cranial Plating or Ravager many times when playing with War. That being the correct decision really showcases the power of the card. I am willing to give up the power of a card like Cranial Plating for any card that costs zero mana, so I can add another potential 5/5 to the board.

The fair matchups have gotten a lot better with The Antiquities War. Giving a very fast aggro deck access to late-game inevitability makes for a tricky composition for fair decks to combat. 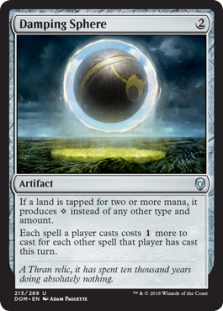 Previously, decks like Mardu Pyromancer or Jeskai Control that were just a pile of kill spells were very difficult matchups, but now I rarely ever lose to them. With those decks out of the way, not that many bad matchups remain.

I would highly recommend to anyone familiar with Affinity, or who's picking it up for the first time, to sleeve up some Antiquities War for their next Modern tournament. Below is the list I will likely play in Detroit, with the possible exception of the Damping Sphere.

A quick note about Damping Sphere in the sideboard. If Humans were on my team, I would rather that they played Sphere instead. The Humans/Tron matchup is tough, and I think Humans needs the card more. In this case I would simply replace it with Ceremonious Rejection, as it is a fine replacement in that matchup and actually better against KCI.

2 thoughts on “Prepping for GP Detroit with Antiquities War Affinity”