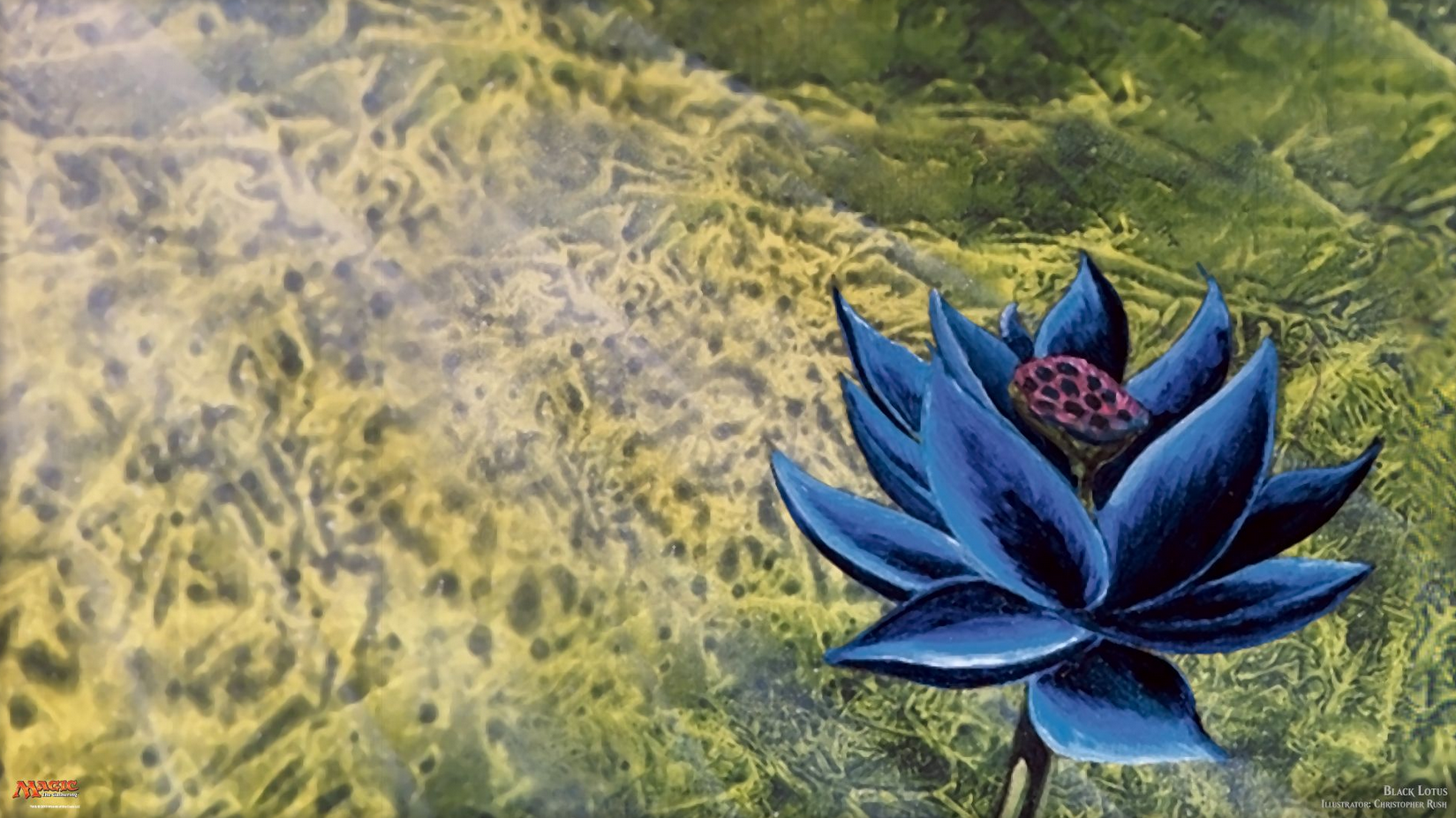 A couple weeks ago, an interest Facebook post spread throughout the Magic community, particularly within the Old School crowd. Amidst a sea of finance chatter and Time Spiral Remastered spoilers, it could have easily been overlooked.

The post came from WOTC founder Peter Adkinson, and it quantified more precisely the initial print run of Alpha. 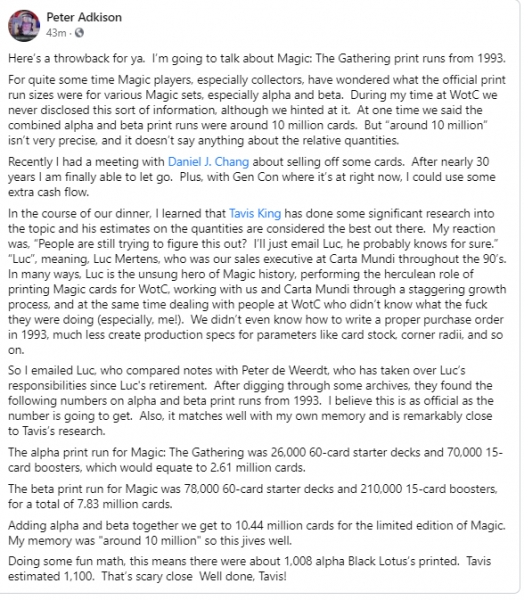 The TL;DR: Alpha rares are a little scarcer than initially thought.

In a relative sense, the previous guesstimate of 1,100 was good enough to depict the true rarity of these cards. The absolute difference of roughly 10% is irrelevant when you’re talking about 1,008 vs. 1,1100. But I want to pause on these numbers this week and consider how truly special an Alpha rare truly is. To emphasize their scarcity, I’m going to compare to some other collectibles and their estimated print runs to hammer home why Alpha rares are the cream of the crop and why I think most are still criminally underpriced.

When it comes to comparing collectibles markets, the reality is there are endless options to choose from. People can collect all sorts of things: trading cards, sports cards, video games, coins, stamps, toys, etc. In order to provide sufficient context in my comparisons, I’m going to focus on a few easily researched, well-known collectibles.

To start, I want to talk about Actions Comics 1, the 1938 comic book that first featured Superman. This is one of the most desirable comic books among the collector community. The comic book outdoes Magic when it comes to value—a CGC graded 9 issue sold for $3,207,852 USD back in 2014. That’s around six times the most recent graded 10 Alpha Black Lotus’s sale price.

One may ask what the print run was on this three-million-dollar comic book. According to Wikipedia, the print run for Action Comics 1 was 200,000, nearly twenty times that of an Alpha rare! So if these are so relatively plentiful, why are they so expensive? I can’t find any recent eBay sales of an Action Comics 1, but it looks like a few single pages from Action Comics 1 sold for a few thousand dollars each on eBay. 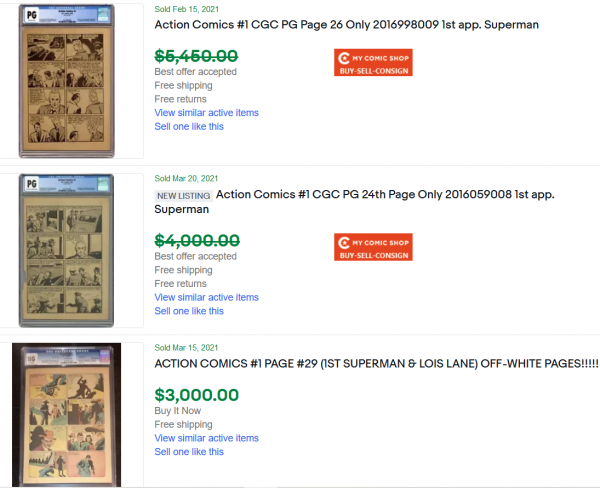 There are two factors at play, I believe. First, these comic books are far older than Alpha Magic cards. To be precise, they’re 55 years older. Thus, far fewer are likely to have survived over the years. Second, far more people have heard of Superman and comic books than have heard of Magic. Thus, the potential buyer population may be much larger.

Still, if Magic sticks around for another 55 years, could more desirable Alpha rares sell for north of $3,000,000? You better believe it. At that point, a heavily played Alpha Purelace could be selling for a few thousand bucks, kind of like the individual pages from Action Comics 1.

I’ve been a fan of Lincoln Cents ever since my dad introduced me to the world of numismatics back when I was seven years old. He passed down his old penny collection, which he began when he was a kid. His father, my paternal grandfather, was a New York City taxi driver and used to bring home his change at the end of each day. My dad would dig through it and look for pennies to add to his collection. 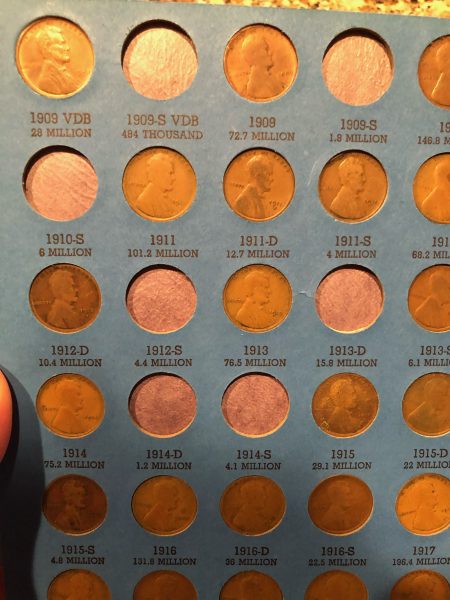 One thing I always found fascinating about this folder was that it included the mintage numbers for each date and mint mark. So for example, 101.2 million 1911 pennies were stamped (in Philadelphia), but only 4 million 1911-S pennies were stamped (in San Francisco). The most difficult penny to track down for this collection is the elusive 1909-S VDB penny, which had a 484,000 “print run”.

The last one to sell on eBay went for $565.55 plus shipping, and was in pretty rough shape. High quality, graded versions of this penny can sell for north of $8,000.

Now, it’s true that this penny’s value pales in comparison to the graded Alpha Black Lotus that recently sold. But you need to keep in mind that a print run of 484,000 is about 460 times larger than a given Alpha rare. Yes, these pennies are over 100 years old, but that’s a lot of pennies minted.

I wonder what a penny would be worth if it had a print run closer to that of an Alpha rare. Well, I don’t know if one such penny exists, but I know of one Lincoln cent that is even rarer: the 1943 copper penny.

I won’t bore readers with details here. Suffice to say, due to a copper shortage during World War I, pennies were made of steel instead of copper. All 1943 pennies, that is, except for a scant few. Experts estimate about 40 pennies were minted in copper in 1943. With such a small number, it’s difficult to estimate value. The last one to sell reportedly sold for $204,000 at auction. Previous estimates reached north of $1,000,000 (perhaps for a nicer condition coin?).

While 40 is far less than 1,008, it’s an interesting reference point. Imagine if the 1943 copper cent was a powerful piece of a popular game. I wonder what it would sell for, then!

I’m less familiar with the world of sports cards—I was into the hobby as a small child, but quickly lost interest. But I ran a quick Google search for the most expensive baseball cards of all time and came up with two interesting case studies.

First, the holy grail of baseball cards: the 1909-1911 T206 White Border Honus Wagner card. Over the past few years, this card has exchanged hands a couple times for north of $1,000,000 and current estimates put the value closer to $4,000,000. Granted this card is far older than an Alpha Magic card and the print run was likely smaller: estimates put the print run range of 50 to 250 copies. 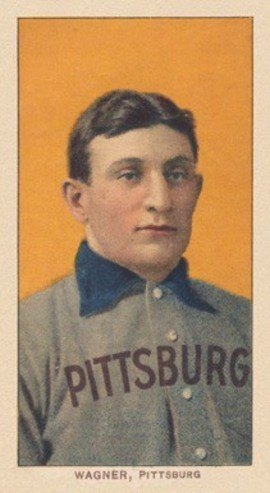 This is perhaps slightly to ambitious to compare to Alpha cards. It’s far older and a good bit rarer. Not to mention baseball card collectors probably outnumber Magic collectors by a fair margin. 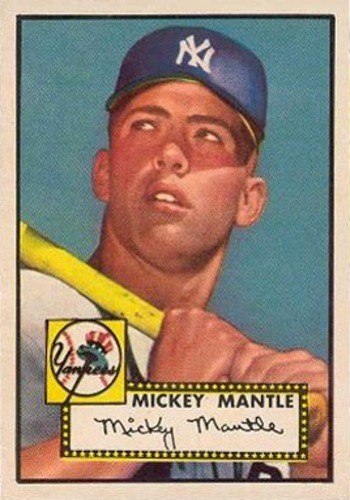 In nice condition, this card still fetches seven figures. I did some research, and unfortunately, there’s no information on print run. One forum I found online discussed this prospect, and the estimate was on the order of magnitude of 100,000's of copies. Even if this is overcalculated by double, it’s probable this card is more plentiful than an Alpha rare.

What does this Mickey Mantle card cost on the open market? In nicely graded condition, you’re looking at a $2,500,000 card. In subpar condition, the value ranges drastically depending on grade. Looking at recent eBay auctions, the card appears to sell for anywhere between $5,000 and $950,000. Thus, the grade and pedigree of the card plays a profound role in the card’s value. 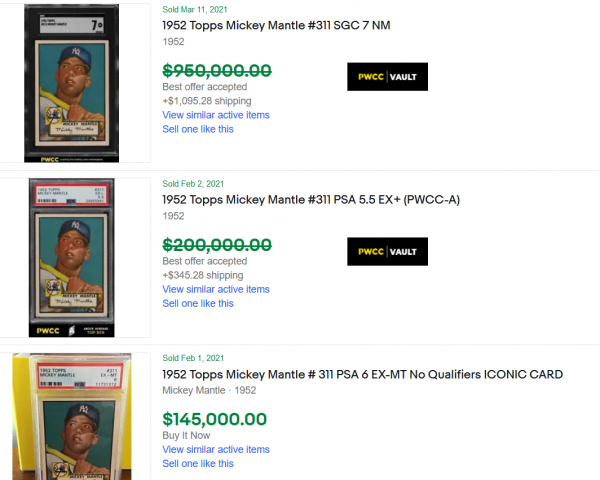 This may be a good comparison to Alpha cards. These Mickey Mantle cards are also far older than Alpha cards. But if Magic remains relevant for another 40 years, it is not at all far-fetched to see a nicely graded Alpha Black Lotus sell for $3,000,000 at auction and a heavily played Alpha Web sell for $5,000.

I know comparing Magic cards to baseball cards, comic books, and coins is akin to comparing apples and oranges. But it’s a fun exercise in research to see how print runs and values on chase collectibles vary from one hobby to the next. Despite being highly variable, I’ve still taken away a couple interesting observations.

First and foremost, Magic is relatively young. Other hobbies have been around for decades longer, so the rarest and most desirable instances of a collectible from an older hobby tends to be harder to find in nice condition. Thus, even in cases of higher print runs, the chase instance—whether it be a comic book, penny, or baseball card—can be easily more expensive than a rare Alpha Magic card.

Second, the print run on Alpha relatively speaking truly is miniscule. While there’s no direct comparison, a desirable baseball card, coin, or comic book with the print run of an Alpha rare would cost a small fortune, often reaching seven figures if the condition is decent. This really underscores the fact that, while the recent graded 10 Alpha Black Lotus recently sold for north of $500,000, there’s still plenty of upside on such an investment.

Even heavily played, less-than-playable Alpha rares will seem criminally cheap if Magic sticks around for another ten to twenty years. Any collectible with a print run of less than 1,100 is going to carry a hefty price tag.

That leads me to my third and final conclusion: Alpha rares are relatively cheap. This is especially true considering the recent surge in prices of other old cards from Magic’s earliest sets. While we’re at it, we can include Beta rares and the Reserved List Arabian Nights and Legends cards, which also have relatively small print runs and can never be reprinted.

While everything feels overpriced now thanks to recent buyouts and the like, I have to imagine that, should Magic be around twenty years from now, these prices will all seem like steals. Only time will tell, but I remain bullish and optimistic these collectibles will make for wise investments for years to come.

One thought on “Comparing Alpha Rares with Other Collectibles”