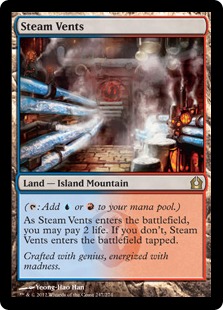 Shock land spreads have been dropping lately. Here’s what you need to know.

Continuing with last week’s series, Sylvain reviews which rares from M14 and Return to Ravnica may constitute a good investment after Standard rotates.

Sylvain concludes his series of Nine Months of Portfolio Management by reviewing his experience and updating his strategies for the year to come. Many valuable lessons have shaped the way he suggests approaching this coming year’s investing.

Again it’s time for the review of Corbin Hosler’s set review! Corbin looks back to his predictions about Gatecrash to see what he called correctly and what he missed.

Matthew Lewis looks over each Gatecrash mythic in turn and evaluates its potential for gains at current prices.

In the wake of the Pro Tour, Jared discusses the new breakout decks, including eventual winner The Aristocrats, and the cards spiking as a result.

Jason Alt looks at the last week in Magic, including results from the last Pro Tour. Don’t miss his latest installment of snark and insight.

The Pro Tour is this weekend and everyone is waiting to see what does well and jumps in price. Corbin provides some preliminary thoughts before the festivities begin.