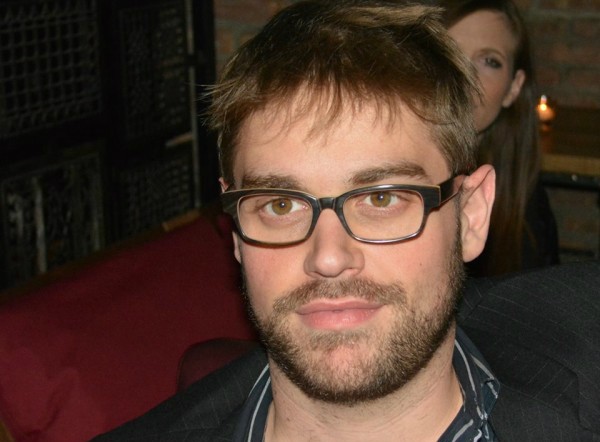 Hey, this is Kelly, and this is the story of QS and the team that makes it hum.

It begins in 2009. Everything you can imagine about Magic online was absent. There were no store aggregators, few buylists and worst of all: nobody talking about trading.

I started a blog called Quiet Speculation and started writing about trading and finding good deals. I posted furiously on forums about Magic, looking for other people who were thinking the way I did. I met a few people, but Doug was a real standout. He got the financials of Magic the same way I did and we began chatting about how to play Magic for free.

Every now and then, we'd message each other about uncommons that we found out were worth money. He told me about friends of his that were trading cards from a single pack into a piece of power... years before anyone else had that idea. But the big breakthrough for both of us happened in October of 2009, and it would change my life forever.

I was a retail drone at Best Buy, putting my music degree to work selling cell phones. I got a text from Doug on a Saturday: 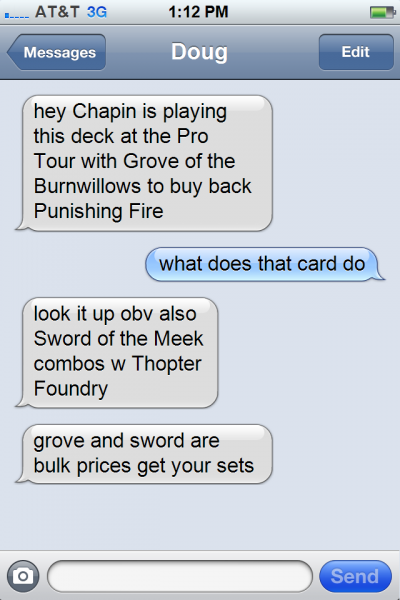 He was right - those cards were dirt cheap and I knew I had to act. I took my lunch break immediately, ran out to my car and started ordering as much as I could on my phone. We had talked a lot about getting cards before they spiked but this was my first time "speculating" by buying up a few playsets.

I was earning typical entry-level retail wages as that point, so buying $65 worth of cards was painful. I felt sick for a moment, thinking I'd blown a day's wages on this.

That Wednesday, I checked my mailbox to find a few dozen each of Grove of the Burnwillows and Sword of the Meek. Within a few weeks I had sold them all for wonderful gains.  The profits were more than I had made at my crappy day job over the same time period.

I thought it was a fluke but I hit again and again. Scapeshifts for a quarter, Goblin Guide at $3, Stoneforge Mystics at $1.  Cards that had been dollar rares (or worse) were being identified as competitive staples, and I quickly engrossed myself in the study of the MTG market to make sure I could keep up.

You might guess that I quit working at Best Buy, and you'd be right.

Doug and I doubled down on our efforts into Magic finance. We worked on a number of ideas, including an MTG investment fund, until figuring out that what we, and our readers, wanted three things: a magazine about Magic finance, a place to gather and share ideas, and powerful tools to make online transactions faster and easier

In December of 2009, we started Quiet Speculation as an independent Magic finance magazine site with daily articles, a forum and a place for us to talk about this really cool new thing in trading cards called speculation.  Shortly thereafter, we invested in infrastructure for an MTG price database, which is now the 'brains' behind Trader Tools.   Since then, our staff has grown from a single writer into one consisting of a dozen writers, many of whom have succeeded at Magic's highest level.

For the past five years, Quiet Speculation has been my full time job and my passion. With this site, countless people have been able to realize massive goals, from playing Magic for free on a Saturday night to launching their own Magic retail businesses and quitting their own jobs. None of this would have been possible without the hugely talented team we've built along the way, a team that I would like to introduce to you.  Among our ranks are Grand Prix winners, US National Team members, Pro Tour Top 8 competitors and MTG Retail store owners.