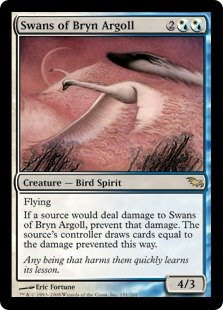 I was waiting until it was reported, but now after the Cascade Swans won the whole shebang, I feel it's time to issue this decree:

Buy it now. Swans, Seismic Assaults, and the uncommons you'll need. The land for the deck shouldn't see too much of a price hike since they're already expensive, but Swans of Bryn Argoll are only 10 a set on Ebay as of the writing of this post. No reason that shouldn't double as news gets out. It has all the makings of a monster. People are going to be attracted to the deck because of its newfound GP winning pedigree, and people love playing with goofy combos.

On another note, while they may not be cheap now, the answers to Swans Combo are not going to get any cheaper. Runed Halo and Pithing Needle, which both shut down the combo kill very easily, will likely continue to rise in price. Pithing Needle is criminally under-used in Standard right now, and it was only a matter of time before a Combo deck took advantage of the control-light metagame and dominated. It seems likely that control will have to evolve to beat Combo, so if you can get your hands on anything from 5-Color without paying an arm and a leg, do so.