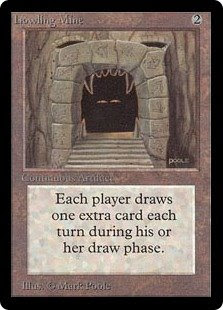 It seems like TurboFog is getting some action in Barcelona! While Day 1 decklists haven't been posted, the coverage team interviewed the on-site vendor, Troll and Toad. According to them, TurboFog cards have been selling out faster than anything else. Windbrisk Heights have also been selling well along with the rest of the Token deck, but to quote Nigel Rowledge of Troll and Toad, on Howling Mine:

That’s a card that has been around forever and which we usually can’t even give away, but we completely sold out of them at about five times it’s old price. Pretty much anything from the Turbofog deck we sold out of, like Font of Mythos – that one deck alone has sold so many cards. Pretty much any card which goes in that deck we’ve sold out of completely.

Howling Mines have been difficult to come by locally as well, so it seems safe to say that this is a buy-low if there is an opportunity. Even if Fog is not a big winner at the GP, the sheer quantity of people playing the deck throughout the summer PTQ season should keep it in demand. It seems a relatively low-risk acquisition, along with the rest of the Fog deck. Jace Beleren, who is around $10 right now, could very well start to see some price increase if Fog starts to gain more support.

2 thoughts on “Fog in Barcelona”