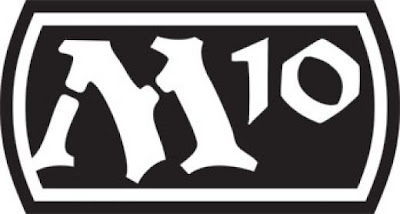 By now, everyone's heard that M10 will contain about 50% new cards. The internet is abuzz with rumors and speculation as to what will be reprinted, and what will not. One thing that hasn't gotten any press whatsoever is how the existence of new cards will effect the value of the reprints. The cards that got reprinted in M10, such as Pithing Needle, held their value extremely well. In some cases, they even gained some value. This is because core sets simply don't see as many packs opened as the expansions do. This is all going to change with M10 - people will be tearing into packs like rabid wombats to get their hands on new cards. The addition of the Lorwyn Planeswalkers will also drive sales, as will the usage of M10 as a Limited format at multiple Grand Prix after its release.

Having not seen a core set containing new cards in the modern era of Magic, it's hard to figure out how this will effect the price of cards. My belief is that M10 will feel more like an expansion than a "core set", mainly due to the new Duals and the old Planeswalkers. If the new duals are anything close to the power of the Ravnica duals, M10 will fly off the shelves. What do you think the impact of having new cards in a core set will be? Will reprint prices fall? Will the new Duals be ridiculously overpriced at first, or will they be priced similar to the pain lands?