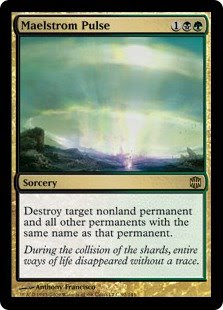 Star City's updated some prices. Here they are, with commentary:

Maelstrom Pulse: $25. This is warranted - the card is as good as advertised. It fits in so many good decks and works well against the ones it doesn't fit into. I was actually going to write about Pulse last night and suggest picking them up, but now that SCG's upped its price, it goes without saying.

Zealous Persecution: $1.50 Starting to creep up to the 2 dollars I predicted. Totally warranted as well.

Lord of Extinction: $12.50. 15 bucks was stupid for this heavy hitter, and he should settle in the 8 dollar range until someone breaks him. There are just better things to do in B/G with 5 mana.

Sygg, River Cutthroat: See the last few posts but the short version is that he's gone from $2 to $4 in the last 24 hours. I blame Patrick Chapin and friends - 5C Blood is a great deck.

Swans of Bryn Argoll: $7.50. This is getting ridiculous!

Some Heads-Up: Everyone's favorite 0/5, Doran the Siege Tower, is due for a rise in popularity. Yann Massicard played Doran Aggro to a win in Seattle and hasn't gotten enough press for his victory. He was also running Gaddock Teeg and Knotvine Paladin, cards that aren't too expensive right now. I hadn't had Wilt-Leaf Liege on my radar lately, but last I saw it was around 8 bucks. Today, it's at $12.50! Wow. The deck also runs Kitchen Finks, which will cost you a frankly obscene 6 dollars each. Talk about Super Uncommons.

Anyway, that's all for now. I hope you picked up your playset of Maelstrom Pulses already, because this card is the real deal. It's almost an automatic 4-of in decks that can run it, and will be strong for years to come. Once again, if you have a good story about how you got a great deal, made a good trade, or anything like that, leave a comment and I'll feature it in a future article!