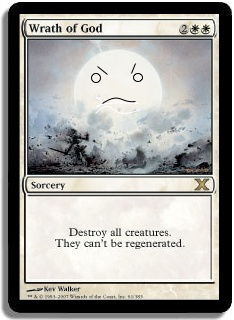 Although it has not been officially confirmed, rumors on MTG Salvation have suggested that Wrath of God will for the first time NOT be appearing in a core set. In its stead will be a 6 mana sorcery reminiscent of Akroma's Vengeance. For 3WWW and the words Planar Cleansing, you can blow to hell everything on the battlefield that's not a land.

The financial impact of this should be clear. Wrath is going to take a massive hit in price. There's absolutely no frame of reference for this - Wrath of God has never been out of Standard before. There's a chance that the card will retain value, but the odds are it will regress in price.

It's a sad day when QS has to report the financial decline of Wrath of God, a Magic staple, but R&D have long shown their dedication to the game and make far more good decisions than bad. Since the news is NOT official, don't go off and firesale your copies. Just be prepared for the fact that come Nationals 2009, Wrath of God will be a card for Extended decks.