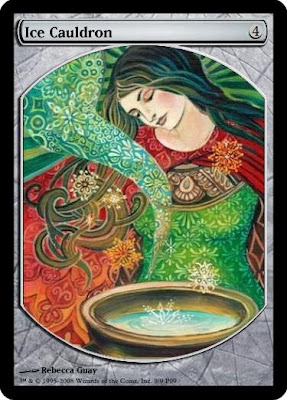 Man, I know they like to send out tournament staples in the MPR mailings, but this is just ridiculous. I mean, this is just gonna TANK the value of my Ice Age copies. Ugh. Just in case you've been living under a rock for the last, oh, FIFTEEN YEARS, here's the Oracle text for Ice Cauldron. Feel free to play your textless promos at a PTQ, where people might actually, you know, KNOW THE RULES, but don't even think about playing this at FNM. Some donkey will invariably ask you what it does. How hard is it to remember these things, people? Damnation kills all the creatures, Cryptic has 4 modes: Counter, Tap, Draw, Bounce. Ice Cauldron just, does what it does!

, Remove a charge counter from Ice Cauldron: Add Ice Cauldron's last noted type and amount of mana to your mana pool. Spend this mana only to play the last card removed from the game with Ice Cauldron.

I know, OMG hard to remember. Whatever. At least the poor players who just scrub out at FNM will have one to play in their decks. I've had my set since it was a chase rare in Ice Age. I'll prob just sell it on ebay or something. Lame!

note: yes, this is farce. no, this is not for real. there is no ice cauldron textless promo. that art isn't even by rebecca guay. i just stole the idea from zaiem beg over on channelfireball and thought it was hilarious.