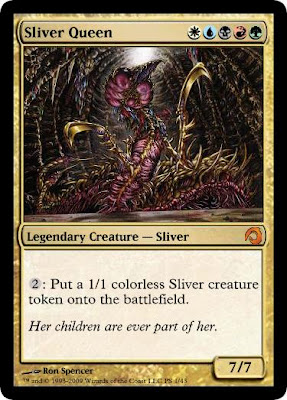 Wizards is kicking off its new Premium Deck Series today by announcing Premium Deck Series - Slivers. A full 60-card deck showcasing common, uncommon, rare and mythic Slivers from all eras of the game, the Sliver deck will theoretically be playable right out of the box. It goes without saying that this will have wide appeal to Magic players. The almighty Slivers even won a Pro Tour by taking over the brains of Chris Lachmann and Jacob van Lunen! The deck has been confirmed to contain at least 5 Rares and a Mythic.

The set will be released on Nov. 30th with an MSRP of $34.99, and the value is directly related to the question that everyone's been asking. Will this deck contain a Sliver Queen?

Sliver Queen is on the reserved list, and unless this deck is actually a more clever way of saying "we changed the policy", the deck isn't going to have one in it. Had the deck a foil Sliver Queen, it would be a tremendous value at 35 bucks. Sadly, we can pretty much be sure that she's out. It seems like it will still be a fine buy, just not ridiculously under-priced.

The bottom line is that few people buy these sets to keep on their shelves, and they will eventually integrate the cards into the rest of their collection. Since people eventually lose their "keep the set together" mindset, they will be happy to trade their Premium Deck cards to you sooner or later. One thing is for sure: the older Slivers used in EDH will be quite popular...