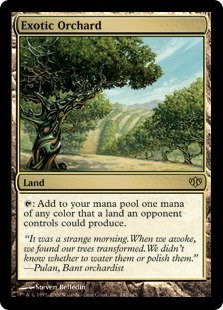 Picking up right where we left off, we're going to talk about the rares in Conflux and Alara Reborn that you should keep on your radar. Frankly, there aren't a whole lot. A lot of the cards that will see play are already at the correct prices. Cards like Master of Etherium, Wall of Reverence, Thought Hemorrhage, Maelstrom Pulse and Dauntless Escort are all fine cards, but they are already where they should be. Not that there won't be fluctuations, but they'll be minor.

A lot of these predictions are predicated on the existing Block archetypes; new archetypes that emerge with Zendikar cannot be speculated upon until the set's spoiled. Another factor is the availability of mana fixing in the next large set; some archetypes just haven't got the mana fixing to be viable but will have potential if a new set of duals or tri-lands are printed in Zendikar. The following 6 cards from Conflux and Alara Reborn represent possible opportunities. There are a few instances of a card with an acceptable book price that are simply trading down for some reason. Uril the Miststalker, for example, books at 5 but most people are willing to call him 2 in trade.

As usual, when acquiring "crap rares" on speculation, it's wise to keep in mind that you are not buying a "sure thing". The point of speculating on low-priced rares is that when you are (inevitably) wrong, the cost is very low in comparison to the potential rewards of being correct. It's just "Good EV" for those mathematically inclined. If you bought Sygg, River Cutthroat the Sunday of Grand Prix Seattle, when it was clear he was the breakout card of the event, you might have paid 75 cents each. 3 playsets would have cost 9 dollars, and the prediction was for them to go to about 4 dollars each. They did so, and your 9 dollars would have turned into almost 50. Get that prediction right more than 1 time out of 5 and you're making money. Not every card is going to be a hit, and in much the same way that Minor League baseball players can go from hot prospect to 30-year old bust, so too will some cards spend their entire tenure in the Standard format trying to "break through".

That said, let's get to the good stuff!

Exotic Orchard – Unless Zendikar brings us some new lands on par with the Vivids, people will be playing Tri-lands and M10 duals to fix their mana. If this is the case, Orchard will be a popular land simply because it's usually a tri-land that comes in untapped. It's no Reflecting Pool, but it should see use as a 2-of in some decks. It’s probably priced correctly right now, but it shouldn’t be hard to find someone with some extras they’ll part with on the cheap.

Finest Hour – The Bant decks will have their work cut out for them unless Zendikar’s generous with its mana fixing. Losing filter lands really hurts. If Bant gets the mana fixing it desperately needs, it could be viable and let’s be honest – who doesn’t want to land a Finest Hour off an Enlisted Wurm?

Noble Hierarch – Hierarch spiked hard around Regionals, and has come down to earth since. The card is still the best in Conflux and is far too versatile and powerful to go unused. They’re trading around 10 right now and they’re not in demand. If you see them, it’s probably not an awful idea to pick them up since they really shouldn’t ever dip below 10 dollars.

Scepter of Fugue – It may not even reach 5 dollars, but it’s been good vs. Control decks out of the sideboard so far. A cheap source of card advantage, Scepter of Fugue should see play as long as there’s a control deck in the format.

Time Sieve – The deck seems to be catching on in local shops, which means the flagship card could see a price spike. There’s already been a small one but the deck isn’t currently regarded as Tier 1. Jonathon Loucks can see the deck being good post-rotation as it loses so little compared to other decks. Along with Open the Vaults and the other cards from that deck, picking them up cheap probably won’t cause you any trouble.

Uril the Miststalker – The question you ask when you look at Uril in Zendikar Standard is, “How do you beat him?” Aside from Planar Cleansing, the best answer is Wall of Denial and hope they don’t have a pump spell. He hit 25 dollars at Pro Tour Honolulu, and while expecting that to repeat is unreasonable, it’s possible that he could hit double digits if there’s a good deck using him. Remember, un-loved Mythics with this kind of potential can go from “crap rare” prices to 5-10 dollars very quickly when they find a home.

The bottom line is that we'll need to wait until Zendikar gets spoiled to refine these predictions. As more information becomes availible, we'll revisit this list along with re-evaluating M10 in light of the new cards.

A lot of people have been writing in to ask if they can get involved with the site in some way. It's great to know that so many people are enjoying what we do and want to be a part of it. There are a lot of different ways you can get involved with Quiet Speculation! The easiest way is to stay involved in the post-article discussions. It's also great to have many pairs of eyes and ears out in the field, at events, at game stores, and throughout the country and world. Information is the most vital commodity when it comes to speculating on Magic prices, so any info reported by readers is valuable. Contact information is at the top of every page, so don't be shy!

a) Would you prefer a discussion forum to replace the comments section? How would this effect your use of "talkback" features?

b) Regarding a Twitter account dedicated to price updates and reader observations: Readers could Tweet @quietspeculation and/or use a hash tag to stay up to date with price trends. Real-time information is the best kind. Would you read this Twitter feed? Contribute? Why or why not?

I'm doing everything I can to make this site what my readers want it to be. If you have any comments, suggestions or feedback, make use of the contact information at the top of each page. I try to reply to every email I get about this site.

2 thoughts on “[CON]/[ARB]: Under-rated and Under-priced”