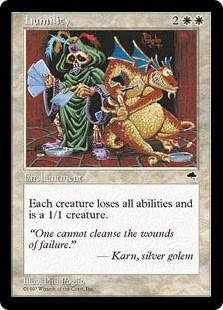 A personal note - I'll be at the Star City Games 5K in Ft. Worth, TX this weekend, working at the Star City booth. I encourage any and all readers to come by the booth and introduce themselves. You'll recognize my face from The Magic Show!
--Kelly

Eating Crow - "...humiliation by admitting wrongness or having been proven wrong after taking a strong position."

This piece is a direct result of a Jeremy Fuentes article over at ChannelFireball.com. In it, Jeremy reviewed his older picks and suggestions with a critical eye. The concept of accountability is central to being the best Magic player you can be so in the spirit of being the best, we're going to take a look back at the M10 set review to see what we called correctly, and issue some apologies to well-deserving cards.

Baneslayer Angel - "Double digit prices...Use these as trade bait, but they may find their way into decks." Sorry for calling you Trade Bait, but you still kind of are. 20 dollars might have been more accurate than double digits. Easy call blown.

Captain of the Watch - "Many people will be trying to play White Weenie Soldiers for PTQs and such, not to mention at FNM. Thse will be at least $5...also great trade bait". Those people never seemed to show up. At least they are/were great trade bait.

Djinn of Wishes - "There is a world of potential in this card, and the pre-sales are only showing them as marginally better than a bulk rare. This is a pick for a sleeper card, especially if it's being sold as a dollar rare." It ended up being in a theme deck and it just isn't powerful enough for Standard. This sleeper never woke up.

Time Warp - "It will be challenging to slot this into a tournament deck in Standard". Damn you Jonathon Loucks! How are you create a deck to reinforce the Open the Vaults pick?

Magma Phoenix - "This is one of the cards that can be "rocket fuel" - a bulk rare that may be far better than people realize". Swing and a miss. Yes, it still has potential and it could still be good, but this was just an outright blank.

Elvish Archdruid - "If some sort of Elf deck really comes up to Tier 1 status, he'll likely be the lynchpin". So. Close. A logical premise backed up by a completely ridiculous conclusion, "It would be surprising to see him hit 10". At least the position was slightly changed shortly after the review.

Great Sable Stag - "His 6 dollar price tag seems a touch high for a metagame that's not going to feature the Little Blue Men too much. Over-hyped Trained Armodon that'll live in the sideboard of some Jund and R/G decks. If people are buying, feel free to be selling." This one hurts the most. That's awful.

Now for the predictions that were closer to reality:

Honor of the Pure -"Crusade and Glorious Anthem never really reached double digits. The White deck is probably going to be over-rated, so this is one to be trading away on pre-release day." You never got better value on these than in Week 1.

Open the Vaults - " Someone will eventually break it and you'll be glad you had your set." Enough said. Still hasn't had a price spike yet, but the deck could be a contender post-rotation.

Silence - "There may simply be better things to do with one's time and mana." Does anyone run this in anything?

Xathrid Demon - "Unlike another highly flavorful card that will probably have sick artwork". We knew the card was going to be crap, but predicting the artwork? Nailed it.

Ball Lightning - "This is a card to sell high while the hype is up." Once again, what deck plays this?

Overall, this set could have gone better. A lot of cards that were over-hyped have died down a great deal and if you got out of those cards early you made some money. Unfortunately, there were 3 crucial missed calls. Calling Baneslayer double digits when she was almost 100% a 20 dollar card is bad. Calling a 6 dollar Stag "overpriced" is downright idiotic. The idea with Archdruid was that it seemed improbable the Elf deck was going to be so good. It being 10-12 dollars is reasonable with a tier 1 popular Elf deck, but that doesn't change the fact that it was an important call that got missed. Many of these predictions were overturned or revised in the following weeks, but for cards like Baneslayer that started out at 7 dollars (for a DAY), it is important to get it right from day one.

There are more sets to review in the future, and hopefully we can look back on the Zendikar review in a few months and see a greater level of accuracy. The information here on this site is well thought-out and rarely outlandish, but it is not gospel. Form your own opinions on cards and back them up with solid, sound reasoning. Most importantly, listen to multiple sources. Neither QS nor Rishadan Pawnshop nor Ben Bleiweiss alone gets it right all the time, but 3 perspectives will let you make a more informed decision and give you a broader scope of data to work with. Both Jeremy and Ben do great work and if you enjoy Quiet Speculation, you'd do well to read their work. Jeremy's latest article can be found linked at the top of the page, and Ben's most recent article on Star City Premium is here.

2 thoughts on “Eating Crow: The Hits and Misses of M10”