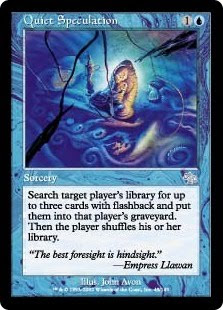 Hey everyone, Kelly Reid here. I'm the guy who does the majority of work on this here site, and I'd like to take a minute to address a few points about Quiet Speculation.

First of all, I want to thank and welcome all my new readers over the last few weeks! Many of you have found the site via Evan Erwin's Magic Show, and to those guests I'd like to say "thanks for watching!" A few people have commented that updates have been a little less frequent lately, and I'd like to address that.
The long and short of it is that between my day job, working GenCon, working out the hardware and software kinks for my segment of the Magic Show, and other such mundane tasks, I've been slightly pressed for time. As such, longer articles have fallen by the wayside for the moment. With GenCon winding to a close, regular updates should begin again shortly.

Don't think I've forgotten about the weekly schedule either - the time between sets is usually light on news - the recent set's stopped spiking and dipping in price and the new spoilers aren't out yet. With Zendikar spoilers just starting to break, we'll be ramping up the updates again. I just want to assure my readers that Quiet Speculation hasn't fallen off the face of the earth!

The same goes for what is meant to be a weekly segment on The Magic Show. Evan and I have been working together to figure things out from a technical aspect - A/V was never my strong suit, but with Evan's guidance we're getting the lead out. My initial hope was to follow up the first show immediately with a second, but due to technical issues we've had to push my second appearance back a few times. I've since acquired some new hardware which should make things go smoothly from here on out.

In other news one of my earliest readers, Amistod, was kind enough to help me acquire an iPhone over the weekend. Aside from giving him a big shout-out, I'd like to ask the readers to leave some feedback about a possible QS iPhone app. What features would you like to see? What price point would you expect? I'm all about making this site the best it can be, and part of that ethic is reader feedback. I can't implement the features you want if I don't know what those features are, so be free and generous with your feedback - I literally read every email, comment and tweet directed my way and try to respond to as many as I can.

That's it for now! Stay tuned for some info about From the Vault - Exiled as it starts shipping out and selling out. For those curious where the price will end up, just keep in mind that you could have sold yours to Star City Games at GenCon for 75 dollars in cash. The hype is unreal, and it's probably justified. If you can get these things at MSRP or thereabouts, it would be wise to acquire a copy or five. If the print run is as limited as they say it is, this set will be worth big bucks eventually.

Best regards and thanks for reading!

6 thoughts on “Letter from the Editor”