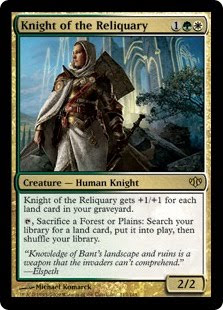 This has been a hot-button topic on Twitter and via email, but it's finally time to make the call. Knight of the Reliquary has doubled in price on Ebay in the last couple of weeks and frankly, the call should have been made with the announcement of enemy fetch lands. Be that as it may, the card is still cheap. Some vendors still have them for 2.50 or 3 dollars, and Ebay isn't quite touching 15 a playset yet, so it would be a good idea to snag a few before they go bonkers. We've seen enough of Zendikar to know that even if the card doesn't ultimately become great in a Tier 1 deck, it was good in extended last season so it'll have SOME value. If it does become Tier 1, watch out. The window's just about closed on this one, so get them ASAP.