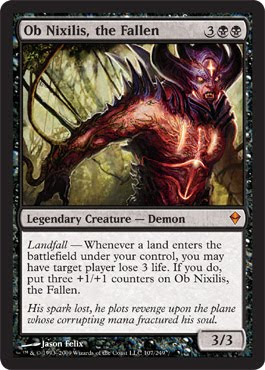 Moving on to black, we start to see a few of the more powerful cards the set has to offer. Black has a lot of fun Vampire-themed cards that are sure to be a hit with casual players, so there might be more "Timmy Rares" than the other colors.

Bala Ged Thief - 3b
Creature - Human Rogue Ally Rare
Whenever Bala Ged Thief or another Ally enters the battlefield under your control, target player reveals a number of cards from his or her hand equal to the number of Allies you control. You choose one of them. That player discards that card.
2/2

We liked this card better when it was Uncommon, a Faerie, and cost a mana less. That card never saw tournament play, and its likely this won't either. Bulk!

Kicked, this card will win you the game outright with Sanguine Bond on the table. The combo is too fragile and slow for constructed, but there will surely be casual players who try to build it. Sanguine Bond will probably gain a small amount of value, as will this. It's not a tournament card, but it will likely be popular enough to trade well.

Oh. Baby. Anyone who doesn't think this card is at least "very good" doesn't understand the concept of incremental advantage. Combining this card with Goblin Guide, Volcanic Fallout, Sign in Blood, Blightning, Lightning Bolt, and the other all-stars of the Jund shard leads to a punishingly aggressive deck with serious staying power. The truth of this card is that if they do not deal with it, they lose to it. It's status as a 1-drop means that your opponent will likely spend an entire turn casting something like Maelstrom Pulse while you continue to beat down. The bottom line is, Bloodchief Ascension has the power to be a format-defining card and they're criminally underpriced just about everywhere. Get on board sooner rather than later.

Bloodghast - bb
Creature - Vampire Spirit Rare
Bloodghast can't block.
Bloodghast has haste as long as an opponent has 10 life or less.
Landfall - Whenever a land enters the battlefield under your control, you may return Bloodghast from your graveyard to the battlefield.
2/1

The fact that it can't block makes it a totally different card than something like Nether Spirit. It just might not be "good enough" in the current Standard format, where 2/2s with Haste cost a single red mana, but it has the potential to be strong. Keep a close eye out to see if decks start using these, and acquire your playset at the first sign.

The bizzaro Hellbent ability on Guul Draz Specter solves the problem of his older brothers, and he has potential, but paying 4 for a 2/2 that doesn't do anything when he hits play is not exactly what Black wants. It would almost be better as a 1/1 for 1BB, but a 2/2 for 4 is what we got. It might have some potential but it's more than likely not going to be heavily used.

Halo Hunter - 2bbb
Creature - Demon Rare
Intimidate (This creature can’t be blocked except by artifact creatures and/or creatures that share a color with it.)
When Halo Hunter enters the battlefield, destroy target Angel.
6/3

This card seems to be the winner of the "How can we make this less relevant?" contest? 1) It costs 3 of a single color to play. 2) It's adorable little triggered ability will almost never be relevant because Baneslayer Angel lives to smite this guy. You might get lucky and kill a Luminarch Ascension token though! Great Job! 3) 5 mana. 3 toughness. You do the math. He'd be SO much more playable as a 6/4, 5/5, or heck, even a 5/4. But no, he just sucks up a Bolt and the game goes on. What a waste.

Limited bomb, EDH fun, constructed trash. There's just not much else to be said about the king of the Vampires. His ascension is far more interesting than his reign.

Did you know that "Malakir" means "I don't scoop to Baneslayer anymore!"in the Zulu language? It's true! The fact that the 'witch doesn't die to Bolt, Fallout, Path or Doom Blade is enough to make her a successful finisher in a dedicated Vampire deck, but she's really fine in ANY deck that runs almost exclusively black cards. Don't get caught up playing sub-optimal cards to trip her ETB trigger - it's just a bonus to having a 4/4 flying Pro-White guy for 5. They're only three bucks, so getting a set now could be smart.

Let's take a moment and forget about the Magical Christmasland Scenario where you have 3 Fetch Lands, a Harrow, and a Warp World and talk about the worst-case scenario. After all, he IS a 3/3 for 5. Not so fast. First and foremost - he costs 5 mana. He is NOT a 5-drop. If you play him without a fetchland in hand, you are -wrong-. In this scenario, you play Ob Nix, retain priority, play a fetch land. They can't Bolt him with the trigger on the stack, because you'll just fetch a land and trigger him to a 6/6 again. Even if they have a Path to Exile, you still trade 5 mana for 6 damage and one of their cards. Hardly an unfavorable trade! Remember, that's really the -worst- case scenario. 5 mana. 6 damage. They lose a Path to Exile. That seems fine. A more common scenario is that they waste their removal on guys like Putrid Leech and try desperately to keep Quest for the Gravelord, Vampire Lacerator and Bloodchief Ascension from killing them, and you just end the game with a 9/9 who double-bolts their face. There's a whole lot to like about Ob Nixilis, so as long as you temper your expectations, he will do very good things for you and your deck. Star City wants 8 per copy, and Ebay is looking to be about 5 per. If he's used in any deck, he'll be worth twice that.

So let's just assume you don't have 10 free mana just kicking around. If you did, why not just cast a Cruel Ultimatum or something? Let's say you only have BBB to play this. For another mana, you get all FOUR copies of the offending card, you get it from their hand too, and you might get some bonus damage. No one plays Thought Hemmorhage these days, so why would they play this? Kicked it still doesn't win you the game. Why not just pay 5 mana for Haunting Echoes? This card is awful.

He's expensive, his +2 ability is sweet, his -3 ability is sweeter, and his -7 is ridiculous. He's already double-digits because, well, that's what Planeswalkers do these days, so its unlikely that you'll make any money on Sorin Markov. We'll leave it to the strategy writers to figure out if he goes in a deck or not, but unless he's the lynchpin of a deck like Mono Black Control, he'll probably just hang out with the other Planeswalkers at around 10 dollars.