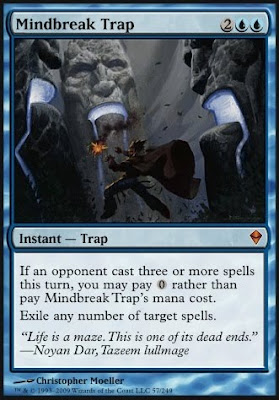 Moving right along to Blue, now!

People love their Mill cards. We all know it's a hilarious combo with Bloodchief Ascension, but in general, Mill cards suck. They are always worth a little bit of money, so trade them to "that guy" at your store who just can't stop trying to get Jace to 10 counters.

It's just too much to ask for. Six turns of drawing 2 cards a turn is a LOT, and you're just asking to get nuked by a hexhunter or a Maelstrom Pulse. Just not good enough, bulk rare.

There is some confusion as to the rarity of this card. If it is only uncommon, it will still be worth a buck or two, but as a rare, it is criminally underpriced. Keep an eye here for confirmation of the rarity.

Despite being the baddest octopod on Zendikar, the fact of the matter is that Lorthos the Calamari King just ain't really a good card. He'll own the table in Limited, make mortal enemies in EDH, but won't be worth his weight in Marinara sauce in Constructed. Bulk Mythic.

Mindbreak Trap - 2uu
Instant - Trap Mythic Rare
If an opponent cast three or more spells this turn, you may pay 0 rather than pay Mindbreak Trap's mana cost.
Exile any number of target spells.

It stops Banefire, Fallout, and Enlisted Ultimatum. It can stop storm combo in all formats. It's sometimes even free in Standard. This card is important, and will unfortunately clock in around 15-20 dollars. This should NOT have been Mythic. That was a major mistake. Be that as it may, get a set and sit on them, and mortgage your house for a foil copy. Vintage players might be interested in such an item.

No one played clone, and adding 5 to the cost isn't going to change that. An absolute beating in EDH, but a bulk rare everywhere else.

Roil Elemental - 3uuu
Creature - Elemental Rare
Flying
Landfall - Whenever a land enters the battlefield under your control, you may gain control of target creature for as long as you control Roil Elemental.
3/2

Too expensive, too small, too fragile. The effect is huge but the fact that he's only a 2-toughness 6-drop is a real dealkiller. Bulk.

Sea Gate Loremaster - 4u
Creature - Merfolk Wizard Ally Rare
{T}: Draw a card for each Ally you control.
"He's a living library. He remembers everything our band of explorers has seen, and we can use that to our advantage."
- Zahr Gada, Halimar expedition leader
1/3

Sea Gate Loremaster wins the award of Most Insipid Flavor Text in a new set. It's got two cliches - "living library" and "band of explorers", and uses these two cliches to set up the most droll, understated conclusion possible. The only reason this is relevant is because nothing else about Sea Gate Loremaster IS. Every time you open one in a booster, punch yourself in the kidney because the pain will make you forget how bad this bulk rare truly is.

Sphinx of Jwar Isle - 4uu
Creature - Sphinx Rare
Flying, shroud
You may look at the top card of your library.(You may do this at any time)
5/5

What a neat little card. It probably won't find a home in any constructed decks, but it could be worth a buck or two to the right Timmy or EDH guy. A foil copy belongs in every blue EDH deck.

Someone on a forum compared this to Mulldrifter, but clearly missed the point of the Flying Fish. A decent sized body with evasion and card selection for 5 mana is a fined deal, and the kicker makes it very appealing late-game. Still, it suffers from the "worse than Baneslayer and Broodmate" issue. Blue is hard-up for card draw right now, but not THIS hard-up. Bulk.