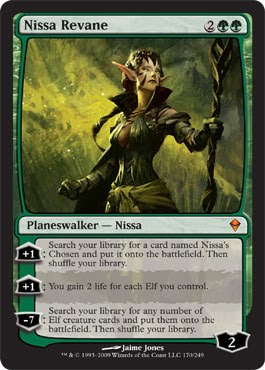 Setting aside for a moment the earth-shattering news that old Power cards will be in select ZEN boosters, we're going to compose ourselves and discuss the remaining rares and Mythics in the set. Green has its usual batch of fatties, elves, and traps that give free creatures, so let's have a look.

Conley Woods likes this card, and thinks that it'll be a sleeper or at least popular with the FNM crowd, and it seems as if he hit the nail on the head. It's a very easy condition to trip in a G/W token or Elf deck, but in most cases, Overrun will do the job better. They'll probably trade will to casual players, so you could do worse than to acquire them from Spike to sell to Timmy.

Get excited about another big mana aura that doesn't end the game on the spot! It's a great flavor and has a nice kicker, but it won't see any serious play.

Lotus Cobra - 1g
Creature - Snake Mythic Rare
Landfall - Whenever a land enters the battlefield under your control, you may add one mana of any color to your mana pool.
2/1

Let's call Lotus Cobra what it really is - a pseudo-bear that accelerates your mana a little. Making it Mythic was a cruel joke, and 30 dollars is entirely too much for our serpentine sidekick. He's more of a 15-20 dollar card. If a combo deck that can abuse the Cobra is found in some form or another, it could justify its current price tag. Unless that happens, the Cobra is supremely over-hyped.

At worst, she's a 2/3 for 2GG if she dies to say, a Bolt or Pulse. That alone will keep her viable. The fact that she can pump out non-token creatures that live through fallout is very cool, and her second ability can get out of hand quickly. It's unlikely that an Elf Planeswalker will ever be worth less than 10 dollars, and that's where Nissa belongs. She could go as high as 20 but it would take inclusion in a tier 1 Standard deck for that to happen. Planeswalkers are usually predictable and stable in value so use them as currency to get the sleepers you NEED.

She's too small, too fragile, and in most cases you're running her (him?) because you NEED the mana acceleration. Definitely the kind of card that makes your Limited deck ridiculous, but in constructed it will probably just end up as filler.

"You know what I want to do today? Invest 4 mana and a card into something that will kill itself AND the creature it's on!" Really, guys? Again, obviously nuts in your sealed pool tonight/tomorrow but its' constructed garbage. Green's really phoning it in so far.

Rampaging Baloths - 4gg
Creature - Beast Mythic Rare
Trample
Landfall - Whenever a land enters the battlefield under your control, you may put a 4/4 green Beast creature token onto the battlefield.
6/6

Hot Damn! If this weren't the pre-release card, it might be worth something. 6 for a 6/6 trample that vomits out 4/4s seems good. Treat this like you treat Ob Nixilis - play him with a fetch land - and reap the benefits. It probably won't supplant Broodmate Dragon or Baneslayer Angel, but the right kind of Ramp deck would really love to have a few copies of these angry beasts.

Scute Mob - g
Creature - Insect Rare
At the beginning of your upkeep, if you control five or more lands, put four +1/+1 counters on Scute Mob.
1/1

Scute Mob and Ranger of Eos make one heck of a team. Some kind of Naya Zoo deck might be in order, fetching out Scutes, Nacatl, Elite Vanguards and Goblin Guides with Ranger of Eos. The mob is only like 5 dollars right now, so keep an eye out. They have the potential to go higher. It seems that comparisons to Tarmogoyf have stifled the hype somewhat, but the synergy with the other Naya 1-drops certainly increase the stock of the bugs.

Summoning Trap - 4gg
Instant - Trap Rare
If a creature you cast this turn was countered by a spell or ability an opponent controlled, you may pay 0 rather then pay Summoning Trap's casting cost.
Look at the top seven cards of your library. You may put a creature card from among them onto the battlefield. Put the rest on the bottom of your library in any order.

Why isn't this card getting more love? It's really not great for its 6 CMC, but as a SB card for aggro against control? You don't even need to be playing green if it's in your sideboard. If you have at least 20 creatures in your deck, you'll see a free guy most of the time. Most aggro decks run at least that many. Most poeple don't seem to think this is good so it is a good sleeper candidate to pick up early.

Big, dumb, and uncounterable means nothing when we have this level of spot-removal available. He's not good. At all.

He's not awful. Despite the fact that he dies in response to his own trigger if they have a fallout, sometimes he'll just be a 3/3 and a 2/2 for 3GG. The problem is, he's the only really good Ally. It should be noted that if you play Conspiracy, naming Ally, and then play a Turntimber Ranger, you get an infinite loop. Conspiracy makes ALL CREATURES you control the chosen type, so the Wolf token becomes an Ally token. We'll see what comes of this.