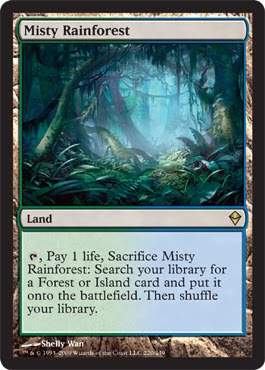 There's not much to be said about the cycle of the Enemy Fetch Lands - they're each between 15 and 20 dollars and a majority of people will not trade them, except for other fetch lands. They'll be staples for Extended season, but unlike the ONS fetch lands, they'll be available in greater supply. The fact that they'll be needed in Standard and Extended both means you should probably just hang on to yours and not worry too much about making or losing a few bucks on them. A dollar here or there won't outweigh the hassle of finding them.

It takes 4 dead guys to make this a 2-mana land. Mono Black Control needed a Cabal Coffers, and despite the fact that they look similar, Crypt is not Coffers. It's a low-end rare until some sort of combo deck finds a way to stuff the 'yard and abuse it.

Land Rare
Emeria, the Sky Ruin enters the battlefield tapped.
At the beginning of your upkeep, if you control seven or more Plains, you may return target creature card from your graveyard to the battlefield.
{T}: Add {W} to your mana pool.

Mike Flores loves this card in Martyr-Proc in 1.x, but that's about the only place it'll be useful. After seeing the whole set of ZEN, it looks like mono-white won't really be that good compared to some of the aggro red and black decks. Another low-end rare only due to its narrow scope of use.

Anything that says "Take An Extra Turn" can always be abused. Always. People called Time Sieve a crap rare, after all. No one's using it right now, it's not legendary, and it's cheap. It will take a combo deck to really break this card, but there has been discussion about using it in the control mirror to seal a win. It'd be good to have a few, but don't expect it to pass 5 or 6 dollars.

There are some mighty fine green creatures, but Green doesn't want to sacrifice its mana development for what will amount to a minor boost. It's got potential, but in most cases, Green decks can't afford the ETB tapped penalty alongside the fact that it can't add counters and make mana in the same turn. Low-end.

Valakut suffers the same problem as Emeria does - it's extremely narrow. If M10 duals had basic land types, or Valakut counted as a Mountain, it would be significantly better, but the fact that it triggers off your 7th land of the game, at bare minimum, makes it a dangerous land to play. Mono red decks are powerful because they can make full use of their mana early to do a lot of damage, so losing a turn of mana development is probably not acceptable for a turn 7 reward.

That wraps up our Zendikar reviews! Overall, the fetch lands are propping up the average value of booster packs. Sleepers like Goblin Guide and Bloodchief Ascension are still cheap, and Ob Nixilis the Fallen is quickly gaining recognition. It's a great set to draft, and the Priceless Treasures promotion has been a huge success. As long as the quality control issues with the card stock and mis-cuts don't continue, Zendikar will remain one of the most popular sets in recent history.

One thought on “Zendikar Analysis – Land”