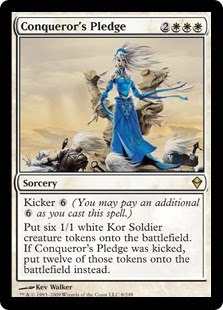 Sometimes a call just has to get revised. Here's what the QS stance on the card was last week:

"This ain't Spectral Procession by a long shot, but 6 guys for 5 mana isn't a bad deal. Kicking it for 11 will likely not happen, but its nice to have the option. This seems like a worse Martial Coup, but people love cards like this so it'll probably trade in the 4-5 dollar range. Don't go out of your way to acquire them quite yet."

In that time, Star City has raised their price on it to 3 dollars, ChannelFireball's financial columnist Jeremy Fuentes has called it a sleeper (despite their price being under two dollars a card), and comparisons have been made to Cloudgoat Ranger. One material fact was overlooked when making the initial analysis of Conqueror's Pledge - Brave the Elements is a very strong card. 6 power for 5 mana is a great deal, and in most cases, having it split 6 ways is even better. Clearly, this opens up the caster to a blowout of Volcanic proportions, but with Brave the Elements, it's not nearly as risky as a turn 6 play. Now, if only we had Windbrisk Heights....

The fact is that this will probably end up as a 2x or a 3x in some white soldier decks. The kicker is outrageous and might as well be flavor text in decks like White Weenie, but the threat of Ajani Goldmane, Honor of the Pure and most importantly, Brave the Elements makes this card more than just a casual appeal. It is currently a card you should begin to acquire, while they're still cheap. The odds are good that they'll rise in price before they fall in price, but don't expect a huge spike. 2WWW makes it very difficult to play in decks other than mono white. 5-6 dollars is a good estimate for the time being. The card should be compared to Cloudgoat Ranger, as Ben Bleiweiss said on Star City, and comparing it to Martial Coup was probably just wrong. Put it on your short list of cards to acquire.