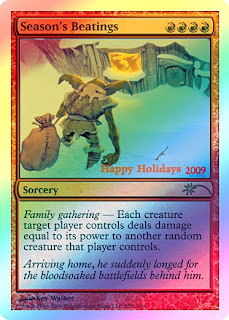 I'd like to thank all of my readers for their time, attention, feedback, and praise of this site in 2009!  2010 will mark the first full year of Quiet Speculation's existence, and I can assure you it will be filled with all kinds of incredible surprises!  Worldwake spoilers are starting to roll in, so brace yourselves for another month of card evaluations.

I've got a lot of really groundbreaking projects in the works, and you can expect to hear about them here, and via Twitter, where I can be reached @kellyreid.  In the waning hours of the millennium's first decade, I want to extend my heartfelt gratitude, literally, to every single person who's read this site since we launched in May.  It's been more successful in 7 1/2 short months than I could have ever hoped.

I'm looking forward to adding even more guest and staff writers in the coming year, as well as making behind-the-scenes changes to the site.  I'm also looking forward to making improvements to things like the ever-popular ticker, expanding further into MTGO and developing resources for fellow card speculators.  Magic players are often at the cutting edge of technology, and are consistently some of the smartest and most driven people I know.  I will be working tirelessly with many members of the MTG community to utilize technology to the fullest.  The game has come so far since 1993, but we've really only scratched the surface in terms of our understanding of the game and its economy.

With under four hours until Midnight here in the Eastern Standard time zone, I want to once again thank all of my readers, contributors, fans, and the other members of the community who helped spread the word and get the Quiet Speculation name into bookmark lists of Magic players everywhere.  This site would be nothing without you.  We'll see you in 2010!

Warm wishes for a safe and happy New Year celebration,

One thought on “Happy New Year from QuietSpeculation.com!”