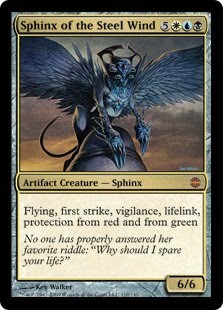 Sphinx of the Steel Wind, Standard's analogue to Akroma and the hardest-hitting artifact creature in the format, just doubled on MTGO.  It seems that lots of dealers online are also selling out, and ebay is low in supply as well.  We've got a third-set Mythic on our hands here, folks.  Supply low, demand high, same formula that we're used to.

The fact is that Jund as a deck simply cannot handle this card.  There is literally no answer to it in the main 60, and some Jund lists aren't sideboarding Deathmark.  Not yet, at least.  A few Esper-colored control decks are popping up around the 'net using Sphinx as a finisher.  The real kicker?  They take advantage of Blightning's popularity by playing Open the Vaults, thus turning a Blightning into a profitable, if painful, proposition.  Star City's sold out at $7, and many of the other large dealers are as well.  There's no reason this card doesn't pass $10, as the deck will prove popular as long as it's vaguely competitive.   Early testing posts a good matchup against Jund, but only some tournament results can solidify the deck as a true competitor in the metagame.  I've just gone and purchased a few, for full disclosure, and I recommend you follow suit.  If this card shows up in a Top 8 at a 5K in 2010, you can expect it to soar.  Most lists are using 3 copies, for reference.

2 thoughts on “Sphinx of the Steel Wind!”