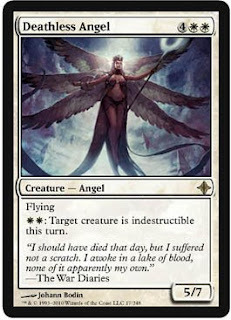 Now that we're starting to see some real spoilers from Rise of the Eldrazi, it's time to start considering where this set might be going.  Worldwake's financial values were headlined by Jace and the as-yet unplayed Abyssal Persecutor.  RoE looks to be headlined by the colorless, yet not artificial Eldrazi Mythics.  There are also rumors of more Planeswalkers, which will undoubtably push the set's value even higher.

It's hard to imagine a current deck this will go in, unless that deck's 99 cards tall.  Sure to be an immediate hit in EDH games, and most likely not playable in Standard or the other Constructed formats.  This is a better version of Spearbreaker Behemoth, so once you ignore the luster of the "angel" tribe, you realize it's not really that good a card. 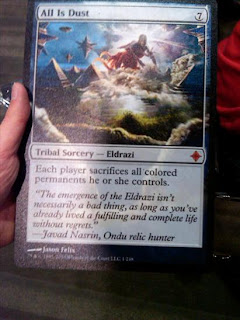 All Is Dust
Yow.  This card just made Eye of Ugin "worth it" all over again.  The best analog to the card is Akroma's Vengeance.  It seems very easy to get to 7 mana all of a sudden, and this card will likely start out Chase, even if it doesn't stay high.  It'll probably debut around $15-20 if early Ebay action is any indication.  Whether it stays there is dependent entirely on play.

Splinter Twin 2RR
Enchantment – Aura
Enchant Creature
Enchanted creature has “T: Put a creature token which
is the copy of this creature onto the battlefield. This token has haste. At the beginning of next end step, exile it.” 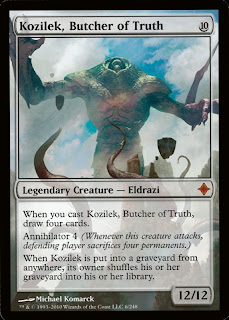 Barring some kind of crazy combo, this won't really see much play outside the Casual realms.

There's no way these Eldrazi badasses should be $30, but they're so appealing to all players on the spectrum.  These are mostly hype until some truly earth-shattering mana acceleration comes to the fore.  Legacy players are certainly looking forward to Sneak Attack decks with these fatties. 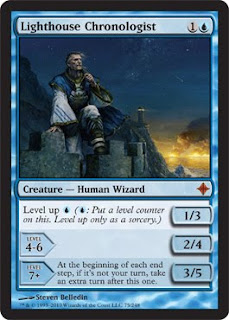 LLighthouse Chronologist
Timmy players will have a blast finding ways to put this in Standard decks, but EDH players are currently salivating madly.  The thought alone of this card in EDH has already pushed it into the $10 range, and it will stay there until the frenzy calms down.  At the end of the day, it's just a 3/5 creature.

Guul Draz Assassin
Not an awful card, but just too slow for competitive play.  Will be insane in Limited, but should end up a Bulk Rare when all is said and done. 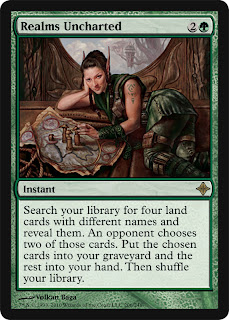 Lord of Shatterskull Pass
Same situation as Guul Draz Assassin.  Some players may get excited by the "level up" mechanic, but the card is still not all that good.

Realms Uncharted
Another big-money card in the making, this Zendikar-themed reprint of Gifts Ungiven could prove to be one of the most powerful cards in the set.  Standard decks may struggle to make use of the tutor, but Extended and Legacy players have a lot to work with.  Don't rule out a combo in Standard that brings this card to the next level.  Remember, we'll have a whole new set of lands come Magic's return to Mirrodin.  This is the kind of card, like Ranger of Eos, that does an awful lot of work across formats, and only gets better as the game goes on.  This should be a high priority on opening day.  They're Ebaying for $5-$10.