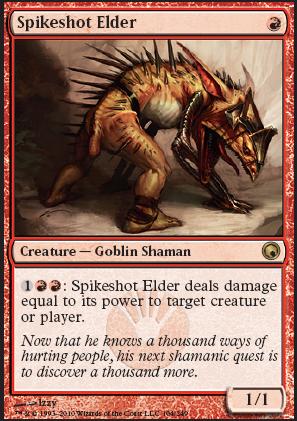 Remember how good Spikeshot Goblin was in Mirrodin block Limited?  Well, his big brother is back and ready to dish out some pain.  He's a 1/1 for 1 with the Goblin subtype, so your ears should perk up automatically.  It propagates the Equipment  theme in Scars of Mirrodin without relying solely on equipment to be good.  It gets value from being a Goblin, and it surely gets value for being a 1-drop Goblin.

A Kor-os deck has been brewing in my brain for a long time, and Spikeshot Elder definitely makes the cut as a four-of.  There are a lot of combinations that make this new Goblin very deadly.  As with almost every card in Scars of Mirrodin, the synergy with Stoneforge Mystic is undeniable, but let's push the card a bit further.

The best equipment to put on this guy has got to be Adventuring Gear.  Suddenly, draws with a fetch land turn into gigantic  blowouts.  The Gear keeps his toughness up in combat and allows you to hold back a fetch land to play D if you must.  Paying 3 mana to do 5 damage anywhere you like, on turn 3, using 2 inexpensive cards, is rarely a bad deal.

Since you're playing both Adventuring Gear and Fetch Lands, why not include Plated Geopede?  We surely want to abuse landfall as much as we can, so Steppe Lynx is a natural inclusion as well.  The inclusion of white brings Stoneforge Mystic and Kor Duelist to the fray, and Stoneforge Mystic in large quantity allows us to play some 1-of equipments.  The new Argentum Armor seems to fit the bill nicely.   We can also consider some other utility equipment, but until we know what the metagame will look like, it seems like a 1-of Argentum Armor and a 1-of Basilisk Collar should do the job just fine.   That accounts for 26 slots in what will likely be a 36-spell deck.  The last two 4-ofs are discretionary, but since we lose Ranger of Eos, we really need to consider playing something that gives us card advantage.  2-3 copies of the new token maker, Kemba, Kha Regent, could fit the bill. We'll surely have a few equipment to abuse, and extra 2/2s are always a welcome thing.  Also,  2/4 for 3 is nothing to sneeze at.

Other cards that seem to have a natural inclusion in the deck: Auriok Edgewright is a value bear, but we need to be considerate of how many artifacts we'll actually have in play at one time.  This deck seems like it will get a lot of mileage out of Mox Opal, so we may look to the Metalcraft keyword to bolster the power level a bit.  The interaction with "equipment matters" cards adds a lot of synergy to an already-powerful deck.   The popular Tunnel Ignus is a potential sideboard card, but I would not include it in the main deck.

Something like this!  The main concern with this list: 1) Is the Mox Opal engine going to work at all?  Inclinations say yes, but it will need to be heavily tested to see if it plays as well as it looks on paper.  2) Is it sustainable enough to beat slower midrange and control decks?  The Stoneforge Mystics and Kemba, Kha Regents are the only way to get card advantage, but holding back a Spikeshot Elder and drawing out their removal can put a game out of reach quickly.  Elder has game-ending power, but some tinkering will need to be done in order to figure out what the best equipment is.

The list is not tested yet (since we just found out about Spikeshot Elder), but early indicators seem to show that Boros-colored aggro has all the tools it needs to be successful. Extended enthusiasts should be concerned with how an Extended-legal Boros deck will look.  Ranger of Eos and Spectral Procession along with Goblin Bushwhacker can lead to some scary outcomes.

Thanks again to WotC for providing QS with an exclusive preview again!  Leave some comments to be sure we keep getting them in the future, and maybe post a few deck lists with our newly spoiled Goblin friend.