Welcome back to the Revenue Review! After my horrendous (hilarious) accident last week, I’m finally getting back on my feet and ready to take a look at what you can expect this weekend at States, errr, The 2010s.
This week I’m going to examine some of the more popular decks you’ll likely see this weekend and where your opportunities lie in relation to each. To be specific, we’ll be looking at cards that are going to command a higher trade value than price value. For example, I don’t expect Day of Judgment to appreciate much in value in the next few weeks, but as more people move toward playing U/W control,  there will be an increase is those looking to trade for it.

The first reported results of this brave new post-Alara world can be seen here, though this tournament looks fairly weak. Nonetheless, it’s a place to begin. Let’s start with some of the known decks before we venture a little farther off road. 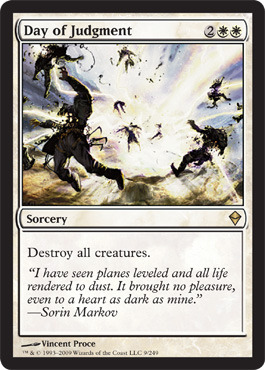 The day has finally come

As I alluded to above, I see the demand for this card increasing, even if the price doesn’t move much. With Bloodbraid Elf and friends gone, this becomes more important to control players. Cascade as an (unfair) mechanic may be gone, but Fauna Shaman and Vengevine strategies will show up still. Raining judgment on these decks means more than it used to, since they can’t immediately reload with one Bloodbraid Elf.
There’s another factor here, and that is what I see as a migration to U/W control. There are a myriad of ways to customize this deck, and even acceptable options to “budgetize” it provided you have at least 2 Jace, the Mind Sculptor. Players who six months ago may have already assembled a Jund deck and didn’t buy Jaces have now picked up a few and need a new deck to play. Add in the fact that Baneslayer Angel has come way down in price and that Jace Beleren effectively counters his big brother and you have a recipe for an increase in U/W players.

This bomb is the real deal, and has a ton of utility, even if it’s not being run in all builds of the deck. It’s an important tool for control players to fight the “new Affinity” decks, which we’ll get to later. I don’t think this card has peaked in price, either. It could see play in older formats and has some room to grow, in my opinion. With two more sets of possible proliferate shenanigans, this is only going to get better.

I’ve seen a couple of decks running this card now, and it certainly answers Titans and Planeswalkers. In case you haven’t noticed, answers to Planeswalkers are at an all-time low, so even a high-casting cost card like this has potential. The fact that it’s an uncommon can actually work in your favor, because players probably won’t want to dig through their boxes, if they even have any, and most people don’t like to buy uncommons online, especially when you don’t need a full playset.

I wanted to give this its own section. It shows up in what SCG dubbed a U/B control list, but the Persecutor has a variety of decks it could start showing up in. Remember this card does tangle with Titans and is a $12 Mythic from a small set that was underdrafted. You can look at Jace, the Mind Sculptor to see how those circumstances affected a popular card’s price. If you can pick these up in trades right now, there is a huge opportunity if it starts to show up in some winning lists.

I’m going to lump Eldrazi Green and Valakut ramp into one category, even if not all the cards are represented in both decks. There’s not really any new news here, but both these decks are going to see a heavy increase in play because they are very strong at the beginning of this new format.

Depending on circumstances, this could be a big player. It mows down the weenie decks pretty well, and in those cases is actually better than a Primeval Titan. These were pretty overlooked throughout the course of M11, but they could be making a push into Standard, especially since there are plenty of players trying to make “big red” again.

This was played in a large number of decks at Pro Tour: San Juan, and could start showing up in Standard in ramp decks. This is a Mythic, and even though it was a promo card, it has potential in ramp decks to help the fight against aggro/midrange strategies. 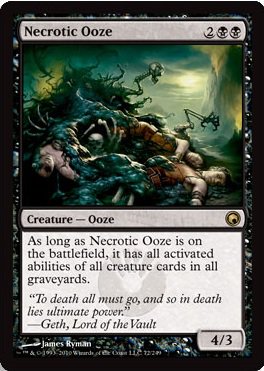 This card has its Oozes

Necrotic Ooze
In my initial testing Dredgevine had a really hard time beating Valakut, but that doesn’t mean the deck can’t be tuned. The Ooze does some really powerful things in this deck, especially in conjunction with the next card on our list.

Done reading it yet? It’s actually pretty absurd with Necrotic Ooze and helps turn new Dredgevine (which, ironically, is more like the original Dredgevine incarnations) into a powerful (at least) Tier 2 deck. These are obviously bulk right now, but they could see some movement if people are looking for a new home for their Vengevines.

If you’re a loyal reader of QS, you know we’ve been on this card for awhile. It’s seen a little movement since Dredgevine broke, but it still has some potential if it begins to find its way into any more decks. While you certainly shouldn’t go all-in on this, it doesn’t hurt to keep it in mind either.

Elves is poised to make a comeback to Standard, and this guy is the reason why. Remember how I talked about how Day of Judgment is better in the new Standard? That all goes out the window if this guy is in play, since he’ll just regenerate all your other Elves. And if you don’t have the Day, he’s just going to Overrun your team next turn. And he has casual appeal. Did I mention he’s an Elf?

The best home for the Monument may turn out to be its original (it first burst onto the tournament scene in the Nissa Revane Eldrazi Monument deck). If you haven’t heard my spiel about this card, you can do so here.

Look for this guy to be in demand again once Elves starts to show up at tournaments. He also fuels all sorts of big-mana strategies, such as Genesis Wave.

The Elves have all the lords these days. This guy happens to combo pretty well with the Archdruid and Oran-Rief, the Vastwood. All these good Elf cards are going to gain value/tradability with Ezuri around to tie the deck together.

If you haven’t seen this deck yet, here’s the best version I’ve found so far. You can also find it in the Top 8 of your local States tournament this weekend. By all accounts, it’s for real.

Now I have something to hold against Noah Whinston forever (in his defense, I did agree with him at the time). But it’s a really important card in this deck, and has a lot of appeal to Timmies everywhere. Plenty of people are already building this deck on the advice of people like Patrick Chapin, and it will pay to be aware of this deck moving forward through the block.

The best thing about this card is it has value in a number of decks. It can fill literally any spot on the curve, even zero, and will be used to fuel Metalcraft strategies in the next two years. These shouldn’t be hard to pick up now and trade at a premium to the players who need them.

Like most people, I saw this as being the worst in the cycle, since blue and white are normally control colors and therefore the least likely to be played. Apparently blue and white now have the most explosive aggro deck as well as the most controlling control deck. Either way, if you find someone still of the opinion that no U/W deck would want these, take them off his hands.

There’s not really anything to see here, since this deck is pretty obvious and straightforward in what it wants, I don’t feel like I have much to add.

I originally planned on doing a Trade of the Week this week, but I’m already out of space! I figure this information will serve you better this weekend than reviewing a trade would, so I think I’ll bump that to next week.
I hope you get out and attend States this weekend, it’s always a hotbed of innovation. I won’t be bringing any sick homebrews myself, since I’ll be judging, but I’m looking forward to seeing what everyone has.