Since the release of Worldwake the debate has raged on over whether or not mythic rares were hurting Magic or not. While people had complained about the price of Baneslayer Angel it wasn't until the price of Jace, the Mind Sculptor rose through the roof that the argument against mythics began to look more attractive. Since then the average price of mythics has risen. Is this due to the power level of these cards or because of Jace?

If we look at Scars of Mirrodin mythics, specifically the planeswalkers, we see that all of them were running around $50 at release. Since then they have all dropped in price, and not just because they are less scarce now that the set has been opened up in much greater quantities (though this does have some impact). The reason that I believe they have dropped is that they were overpriced from the start. Elspeth Tirel and Venser, the Sojourner see almost no play in competitive Standard. Koth of the Hammer does but only in a few decks.

With the exception of Jace all the other high priced mythics have dropped in price. Is this because their prices were inflated due to Jace? Now of course some mythics have risen in price as they found homes in decks, but this is true of any card. Even at its highest Frost Titan didn't break $20.

Unless Wizards releases another mythic with the power level of Jace I think we may see the price of mythics drop on average from what they have been since the release of Worldwake. Primeval Titan, Vengevine, and perhaps Koth are probably the only three mythics released since Jace that feel powerful enough to be worth $30 or more. If Survival decks get banned from Legacy in the future then even Vengevine (which honestly has no mythic feel whatsoever) will probably drop significantly. 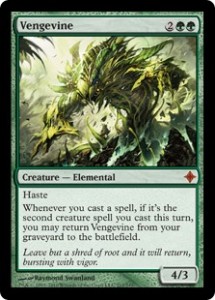 If the pre-sale prices of Mirrodin Beseiged mythics are as high as they were for Scars I would almost blindly suggest trading them away at the pre-release. Of course this depends on what cards they actually print but ever since Jace they have not released a card that can hold a $50 price tag. Assuming that the price of future mythics does drop, as I suspect they will, what will this do for the prices of current mythics?

This is an interesting question because it could give us an opportunity to make some money with cards we currently have. To be completely honest I'm not sure whether or not it will have any effect on the current prices. We still have a long time until the next set is released and I think the prices will have stabilized on their own by then.

Still this is an idea that is worth discussion because if the price of mythics is going to start dropping for future sets we stand to gain a lot by being aware of this trend before others and getting rid of cards before the prices begin to decline.

I'd like to hear what you think. Do you think that the price of future mythics will be lower, the same, or even higher than they are now? What if another Jace-like card gets printed?

One other topic that I recently discussed has to do with proxy cards. I picked up a couple of proxy power cards about a week ago. I first saw them on eBay but didn't feel they were worth buying. Someone had seven of them at FNM which I traded for at $2 each. They were pretty decent foil proxies of a Black Lotus, Time Vault and a bunch of other older expensive cards.

Is there anything wrong with trading cards like these as long as you make sure the other person is aware they are proxies? I've heard good arguments for and against them and I'm just curious what you think about them. Join me next week when I talk more about collecting and how to use trading to maximize your collection with a minimum of cost.

20 thoughts on “Are the Prices of Mythics Going to Drop?”