I want to start off today as a continuation of my last article, talking about risk. Here are some of the comments that readers posted.

From Ernest, who encountered the same guy I almost bought from:

He is a big burly dude, 26-32, brings a friend with him that is skinny/doesn’t talk.

To me, his cards were very good fakes. But I’ve been out of the game for a long time. However, at the same time, what I could tell was that the printing was shady.

Finally, he’s very intelligent/tricky. He bolts his Jace’s in plastic, so you can’t take them out/view them. And he pretends he doesn’t know what’s going on, so when you see a Mox Pearl in the pile, you get a little excited about what’s going on. But that’s gotta be fake too given what we’re all talking about here.

Lastly, I should have suspected when I found an identical offering to what you put up, even located in the same geography ( Chicago ).

His facts about this guy check out with what I know. So I would recommend not buying any cards from Mr. Gils.

Some time ago, I had my backpack stolen from me at an event. It was the first big tournament that I had played at (drove out of town to go to) other than new set releases. My backpack was under my chair while I was playing and when I got up, it was gone. No one saw anything. I lost over $1500 of cash/cards/electronics etc. I’ve come to grips with it over time, but I think what annoyed(I was much more than just “annoyed” at the time) was that the tournament host was unsympathic to say the least. My wallet, car keys…everything except my cell phone and the deck I was using was stolen and the host of the tournament seemed to care less. I won’t mention their name cause I’m over it and I’m not interested in smearing a very popular company who I’m sure is otherwise good for the magic community. It was my responsibility and no one else’s. Overall bad day though. I stopped playing for almost a year. Had to sell my deck to the vendor to get cash so I could buy gas to get home. Wife had to call locksmith to make a car key. And when I asked the host to make an announcement or for anything they could do to help, they reacted as though I was annoying them…like I’m supposed to just say, “oh well, it was only $1500…it’s not that big of a deal, don’t bother concerning yourselves with the wellbeing of players at your events.” Anyways, I said all that to say there’s a dark side to all the money that can be made of collectible products and naive participants. Since then, I’ve heard much worse stories, people asked to follow others back to vehicles/hotel rooms only to be mugged…just be wary and careful of what you get yourself into and take the time to think about what you’re doing. 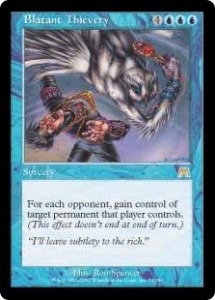 I think Chris gives an excellent lesson in how to protect ourselves at tournaments, and the costs of not doing so. A theft can literally knock you out of the game. Personally, if I had all my stock stolen at a tournament, it would be very difficult for me to recover. One way to avoid getting completely wiped out, if you have enough stock, is to leave some at home, and try to keep all expensive electronics on your person at all times. By making sure you still have some backup if your bag disappears, you might be able to at least rebuild. But Chris’ story also shows us what TOs should be doing to help prevent theft. In his experience, the TO was unhelpful, and didn’t cooperate to help find his bag. This is unacceptable. TOs are morally, if not legally, responsible to prevent theft at their tournaments. The ring of GP bag thieves was broken up due to cooperation and communication between the TO and judges. TOs must do their best to protect their players.

A whole separate article could be on Magic Online risk mitigation, and the very scary prospect of using PayPal to monetize MTGO objects — Twice I’ve been burned when I’ve sold complete sets or Event Tickets to MTGO users. One transaction occurred when dealing directly with a player on MTGO who reversed the charges three days after the transaction was complete, and the money already in my PayPal account was yanked out of my account. The other was through eBay, but the buyer used what turned out to be a stolen credit card, and the CC company nullified the transaction a month after it had processed. The buyer bought about a dozen similar MTGO items the same week from a variety of sellers before the card was reported stolen, and ebay deactivated that buyer’s account. However, since I had already withdrawn the money from the transaction into my brick and mortar bank, Paypal instead now claims I owe them for the transaction, and has since locked my account. Be aware that PayPal considers the exchange of virtual objects to be a “service” and therefore it not an insurable transaction for goods. So they will not assist in any funds reclamation related to MTGO transactions gone amuck. If there are more secure methods of conducting real-world currency exchanges involving MTGO cards (an escrow service, an automated arbiter, etc.) I’d love to know more.

The selling of MTGO cards is a bit of a difficult process, and here Lackey highlights some of the problems. When you’re selling the items over ebay or paypal, the other person can reverse the charges, take the money back, and keep the cards. This is the main reason I won’t sell cards for cash on MTGO. I usually just go for tickets.

Those were all the comments mentioning specific instances. I don’t have any trading or financial theory today, so just a quick card tip for those of you on the front lines:

RUG has assumed the role of the most powerful Jace deck in the format. It has the tools to beat both agro and control. Because of this, I anticipate U/B being shoved to the sidelines for the time being, so you might want to sell of some of those archetype staples like Grave Titan and Mimic Vat while the price are still high.

That’s all for this week, but join me next time when I dissect the financial side of MTG Pimp.