Welcome back to the Revenue Review, where this week we will actually be reviewing some revenue. School and work have conspired to keep me from trading as often as I’d like, but I made it out to Game Day on Saturday to move some cards.

One thing was certain. It had to be better than the last Game Day I attended.

Playing-wise, I ended up 3-1, losing to mono-black control and my infinite flow of lands. But the highlight of the day definitely was casting Genesis Wave for 13 on Turn 5, which earned a scoop on the spot. I finished in third place, netting a couple of dollars of store credit after the entry fee and the snacks I purchased.

In an effort to align our trade prices with what you’re likely to find on Ebay (the baseline for sell prices), I wanted to begin using card prices from the Black Lotus Project, which tracks sales from Ebay. The problem is that neither they nor MOTL have added Scars to the price guides yet, so I’ll be using Coolstuffinc.com until I figure out a workaround. I’m not an expert on MOTL, so if there is a list there I can reference for future articles, please let me know.

The tournament scene at my local store is filled with very casual players who care infinitely more about their personal value when trading than they do card prices. In only one trade were prices even brought up, and my trade partner decided that, in the end, he didn’t care so long as he got the cards he wanted. 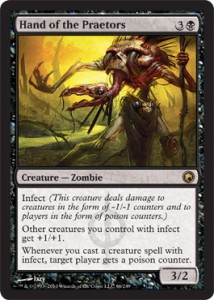 Since I’ve been working on Friday nights and don’t play MTGO, I haven’t yet drafted Scars, so I was more than happy to pick up the lands. The real pickup is the Hand, which is a card with insane amounts of casual appeal. My philosophy is that Poison cards are like Ball Lightnings – they won’t stay in the trade binder long. My partner originally wanted a second Lodestone Golem in the trade, but when I told him that wasn’t a trade I was comfortable making because I needed to gain something from the trade, he had no problem dropping it to one in order to facilitate our deal.

I know this trade doesn’t look like much, but it’s actually a trade I like quite a bit. It’s safe to say the majority of people who want Nantuko Shade, have it. It’s a niche card that’s been around forever and reprinted into oblivion. The lands, while also niche, are new, opening up a much larger audience who are looking for them. This could change if the Shade appears in some winning decklists, but I don’t have high hopes for mono-black control.

It’s much more likely that I’ll find someone building a G/W deck and in need of cards than I will someone in need of Shades. The takeaway from this is, when you have a chance to move cards that have gone stagnant in your binder, you should jump on it to keep your binder fresh, which in turn opens more doors with those who’ve seen your binder already.

My partner valued his Gideons at about $20-25 apiece and Commands at $15. Before forging ahead and trying to close the deal, I took some time to find out why he wanted the Commands. Turns out he is really interested in playing control but doesn’t have the requisite Jace, the Mind Sculptors. He said he is gearing up to play some sort of control deck in Extended. We talked about how nuts Cryptic Command is (very) and I told him I expected the price to jump up come Extended season. That, and the fact I was the only player at the store to own Cryptics, was enough for him to accept the difference in prices.

Truth is, I probably shouldn’t have made this trade. Same logic as Nantuko Shade applies here. Those who want to play Colonnades already have them, whereas Effigy is just beginning to see tournament play. But I love lands, so what can I say?

Remember that player building G/W I talked about? Found him. To him, Iona was just another fatty in his binder, whereas the land contributed to something he needed NOW, which is a great incentive to lose value in a trade. 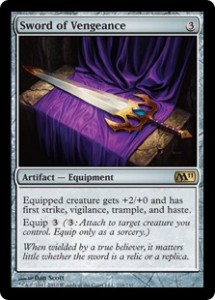 This trade was made with the same trader as the last one. I told him the values were heavily in my favor, but in the end, he just said there was nothing else he wanted from my binder and didn’t care about the Green fatties. As I said before, the traders at this store are very casual-oriented, and this type of attitude is typical of this type of player. While this case was a bit extreme, the bottom line is he wanted certain cards for his new deck, and didn’t care about older cards he had no use for.

I made this trade with the leader of a small group at my store who have combined cards. Some of them hate “netdeckers,” if that gives you any indication of the type of players they are. They are good people and the guy who handles the collection is tricky to trade with. I once had a trade pulled out from underneath me because I wanted fair value on my fifth and sixth copies of a card. He couldn’t understand why I wouldn’t trade them to him at a heavily discounted rate since they were just extras.

Anyway, I certainly wouldn’t trust my collection to him to trade, but to each his own. In this case, with the tournament ending, he desperately wanted to complete their collection of the full-art promo.

It hurt a little to see it go, because I really like full-art cards, but I handed him my binder and went to work on his. I pulled out the three cards I was interested in picking up, and told him to pull whatever he wanted. He pulled out only the Tempered Steel and said “I’m cool with doing this three-for-one.” In most cases, I would feel the need to point out the difference, but I know he generally knows the prices on these cards. In any case, I made the trade very quickly.

That’s all for this week. Check back next week for more analysis!