Unfortunately I wasn't able to attend the SCG Open in Boston this last weekend. I had loaded up on Mimic Vats and Abyssal Persecutors hoping to make some last minute trades Friday night and Saturday morning since I expected a lot of people to jump on the GerryT bandwagon and play U/B Vat. From what friends told me there was a ton there although it didn't seem to place well. That isn't too surprising though as I've found it can be a difficult deck to play well and picking it up for a week before a major tournament probably isn't going to give you enough time to learn it.

There are two kinds of things I generally look for when I'm collecting. The first is that for whatever set I am collecting I want a playset of everything. Second I'm currently trying to complete a playset of promo cards. For both of these I have found that trading over the internet is the best way to acquire the cards I'm seeking.

Some promo cards are easy to find. Recent FNM promos, textless player rewards cards and pre-release/release promos can usually be found in the binders of people at your local gaming store. On the other hand older promos, Vanguard and judge promos are generally more difficult. Without trading sites like MOTL or the trade forums on sites like mtgsalvation my only other hope would be to try and luck in to finding them at larger events or to pay cash for them on eBay or from dealers. In general I would prefer to spend as little cash as possible on my collection.

Trying to collect a playset of a given set comes with its own unique challenges. Generally buying a box and doing some drafts is enough to get the commons and most of the uncommons. I've actually found that the most difficult cards to trade for can be the bulk rares.

The reason for this is that many traders tend to overvalue cards like this and generally try to get at least a dollar for them. While it is often possible to get a couple of them as throw-ins this can be a slow process when trying to complete a set.
In my experience the best way to trade for these cards has been trading down. Not everyone understands the generally accepted convention among traders of giving up more when trading up. They see twenty-five dollar rares as being equal to a $25 rare. Sometimes you can get them to understand where you are coming from, especially if you can get them to understand the difference in value when selling cards to a dealer. For example that $25 card may be sellable to a dealer for $15 but those bulk rares would only get you $2.50. This may not always work though and again this is where internet trading comes in.

The traders you meet online are often more understanding when it comes to trading up/down and many of them will be delighted to trade up. Now I'm not recommending trading a $20+ mythic for a bunch of bulk rares unless the deal is amazing but the $5-10 rares are perfect for this. They are often easy to trade up for then use to trade down for more than what you traded away. 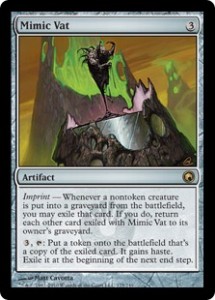 If needed you can also purchase the cards you need from a dealer or eBay. I will usually do this to complete the last few cards of a set. When I need 30 cards it is easy to find people who have some of what I need but as my list shrinks so do the odds that I will be able to make a trade for them. Selling off a few cards to pay for the last cards can be a great way to save time.

Generally being a collector means that you may take a 'loss' in some of your trades. While it may not be a loss in the strict sense, i.e. you didn't actually lose value, often it will mean trading down or making a trade that is not as favorable as you would normally like. The key is to minimize these losses by using a variety of methods to complete your collection.

One final thing I want to mention is the idea that you shouldn't have any emotional investment in your cards. That is, the idea that you should look at cards as currency. Unfortunately for collectors this is often more difficult to do. We value our collections and completing a set is, for me at least, an accomplishment in its own right. Breaking up a collection is not something I like to do.

There are cards in my collection that I wouldn't trade away but on the other hand some cards I'm willing to make deals for. Generally I let people know that the card is coming from my personal collection so I would expect some added value out of it because I will need to replace it later on. My fourth copies of Iona or Avenger of Zendikar, for example, are cards I could trade away because the chances of me actually needing all four copies are slim.

It is ok to have some personal investment in your cards. I would urge you not to keep any of those cards in your trade binder. I'm sure we all know people who will hand you a binder where they are only willing to trade half of the cards in it. Asking, “Is this for trade?” gets annoying pretty fast when you have to do it for every card you want. If I hear that someone wants a card that I own and am willing to trade away and we can't work anything out with the cards from my trade binder I will sometimes let them know that I have a copy that might be for trade and see what we can work out.

When I am in the process of completing a set I am much more likely to trade from it than if it is already completed. This is actually a bit irrational but I, and many other collectors I know, have less of a personal investment in sets that are yet to be completed. If you are a collector, the next time you hear that someone wants a card in your collection don't automatically dismiss it but try to see what you can get for it. In the end you will probably be able to get the card back easily and have some extra cards essentially for free.

For those of you who are both collectors and traders I would love to hear from you. How do you go about acquiring the cards you need? Are there any interesting situations that have come up from being both a collector and someone who looks to trade for value?

5 thoughts on “Trading Vs Collecting”