I hope you've all continued your painting and otherwise artistic practicing during the three week absence of any tutorials on this blog. If you have than today's (and next week's) should be a breeze. It takes a steady hand and some precision brush strokes to complete so I hope you are ready. 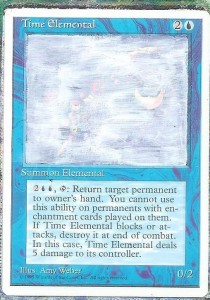 This week we will be working on an old and obsolete card, Time Elemental! I happen to think that the artwork for this card is rather mediocre as far as magic cards go, so I'll be replacing it with some fan art. Fan art is another great avenue to direct your painting talents down. These types of alters can be immensely popular with some people so it is a good skill to possess. For those of you who don’t know, fan art is the name for a piece of art that depicts a popular character or a pop culture reference, such as painting “The One Ring” on an Oblivion Ring or any of the basic lands with semi-nude anime girls that you can find on Ebay. After considering the card, I have decided that the name and even the abilities on the card lend themselves perfectly to a Doctor Who reference, so I'll be painting a TARDIS. For those of you who haven’t seen the show before, do yourselves a favor and watch it (Netflix has it online).

Time And Relative Dimension In Space 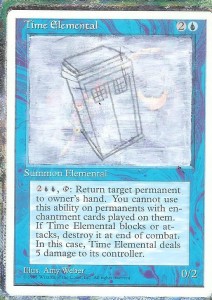 The first step in the process is to give yourself a clean “canvas” to work with. This involves painting over the original art in a solid color. While most artists use white, some times it may be easier to use a color closer to the tone of the picture you are about to create. For this project we will use white though. At this point you want to let this coating dry completely, let it set for a little while. Now is the perfect time to create a few sketches to help plan out your composition. When the paint is dry, use a pencil to sketch the drawing on the surface of the card. The sketch does not have to be exact, but should be close enough to use as a guide.

Since our TARDIS (The Box) is flying through space, I'll need to paint the background black. I did three coats of Mars Black 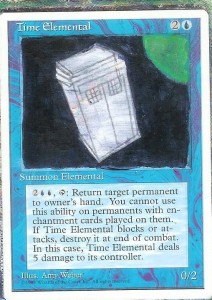 slightly thinned with water to keep the coats smooth. I also decided that a green planet would be fun, so I added that as well, but feel free to make it whatever color you like. Notice that I stayed fairly true to my sketch and mostly stayed outside the lines, but was not afraid to cross them. Remember that this is a just a guide, and eventually you will paint over the whole thing so don’t hold back.

Who looks at a Magic card and says “That could be a little more sonic!”?

Adding the stars was particularly fun. I took a tooth pick and dipped the very tip of it in white paint and proceeded to (very lightly) touch it to the background. I found that if I put too much pressure on the toothpick, the paint dot would have a hole in the middle. This is a time for patience. Getting more than two stars per dip of paint should be a rarity. I then took an old frayed brush and with very little paint on it, stamped the cloudy belt behind the stars. 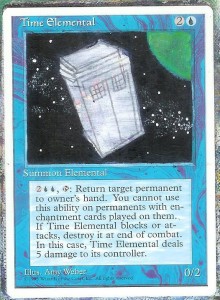 At this point I had expected to be done with the background, but I found that the composition looked a little shallow. To help fill some of the negative space, I decided to add some space gas. I mixed up a lavender color from Ultramarine Blue, Titanium Red and Naphthol Red and very lightly dry brushed the color over the stars in a pattern that seemed to fill the space properly. I then added a little more Titanium White to the mixture and added some highlights to the gas to give it some depth. 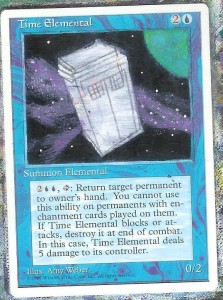 Having finished the background I think we've come to a good break point for this week's article, we'll finish this piece next week, until then make sure you show your support for Chris McNutt as he makes a run for office!