I want to introduce you to the most popular, yet most underutilized, tool that Magic players (and more specifically Magic traders) have at their disposal: The Bulk Box. 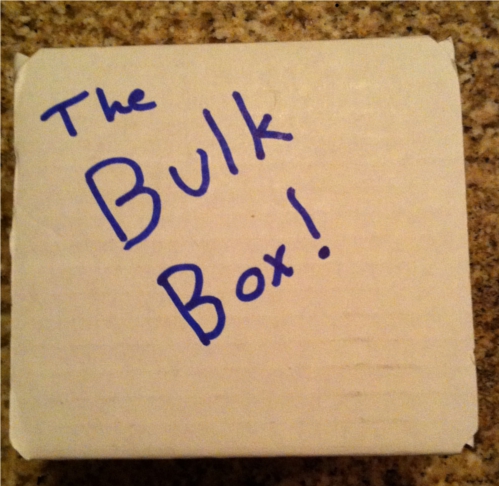 The concept of The Bulk Box was introduced to me on the very first day of my Magic career, back when I opened my first pack and started my first draft. Upon completion of my draft, a guy who was quite obviously sharking the young, impressionable souls like myself walked up to me with his binder full of expensive cards and a box. Having looked through the binder and finding every card way out of my price range, I turned to this box that he was carrying with him.

The rules were simple. I could put in any two of my rares, and get any rare out of his big box. To me, it was a genius plan, and as I rifled through the box and pulled out the stack of rares I wanted for my awesome UB Mill deck (quite the deckbuilding genius I was!) I handed to him, in return, a stack of rares that I had opened from the draft and the multiple boxes I had purchased. Assuming I took twenty rares out of the box, and assuming that your local game store buys bulk rares at the fantastic rate of ten cents each, Señor Sharky Shark made two dollars at the bare minimum from our one trade, assuming every card I gave him was pure trash and bulk.

Assuming that he kept this box running all day, and met about five more of me over the course of the tournament, that is a very easy $10 minimum for doing very little work.

Here's how to start up your own bulk box.

The idea is simple: you take every rare that would normally poison your binder and put them in the box. Anything that has a buylist price above bulk stays where it is - and I check this by using Trader Tools on this website. Those are cards that I can actually trade or just bulk out to buylists already. Everything else goes in the box. You were not going to trade off that Amulet of Unmaking anyway.

How has it been working out?

Fast forward two years and I am quite the trader-savant. My binder has nice rares and I’m grinding the tables like it’s nobody’s business, making money along the way. The Bulk Box has proven to be a money maker all on it’s own, as I just set it out at the table where I am trading and let it work its own magic while I focus on trades through my main binder. Most of the time, I have people show me what they are putting in and taking out, but often I just let the box run its course. It is important, though, that you check the status of your box every so often for multiple reasons. First, the box can grow stale very quickly, especially if you run into particularly savvy traders, but mostly just naturally over the course of time. When this happens, you have to consider selling at least half of your Bulk Box to put into some speculative investments (like, for an example that may or may not relate to me, buying one hundred Argent Sphinxes from my local game store). Second, you may have hit a home-run.

A home-run, in this scenario, can occur quite often, as your goal is to ensure that every card in your Bulk Box is, by your local game store’s buylist, a bulk rare. In most cases, this means that all the cards are 10 cent rares. So for a home run to occur, all you need to do is have someone put in a rare that is actually worth 25 cents, or 50 cents, or, as it happened to me, ten dollars (Somebody, when I wasn’t looking, put an Arid Mesa into The Bulk Box). I find two things to be true about The Bulk Box.

First, when people use it they are pretty much able to name their own prices on cards, since the general framework was in place, so they become too sure of their pricing and choose not to use smartphones or other gadgets to check card prices. Second, people tend not to know the correct prices on many of their cards and, therefore, make mistakes. Third, the raw card transfer works for you. "Look," you say, "you get to pick any two cards to put in the box, then you get to pick anything you want from this. You've got nearly unlimited choices." People like to feel empowered like this.

Over my years of experience running The Bulk Box, I have claimed quite a few home runs, but I also have attempted to perfect the art of The Bulk Box. To that end, I have created a few simple rules.

First, the basic rule that started it all, you can put any two rares in to get one card out.

Second, for every ten cards you put in, no two cards can be the same.

Third, certain uncommons are accepted, and are exempt from rule two.

Rule one is the foundation of the entire box, but it started creating issues when I started socializing with some of the more savvy traders in my playgroups. What I offered to them was not a chance to get ahold of some sweet random rare for their commander decks, but rather instant portfolio diversity for their stacks of Red Sun's Zeniths and Thada Adel, Acquisitors. In just a few short weeks, I would have my box completely filled with Thada Adels, Red Sun’s Zeniths, and nothing else. The entire market for The Bulk Box will be gone, and with it, all my potential money. 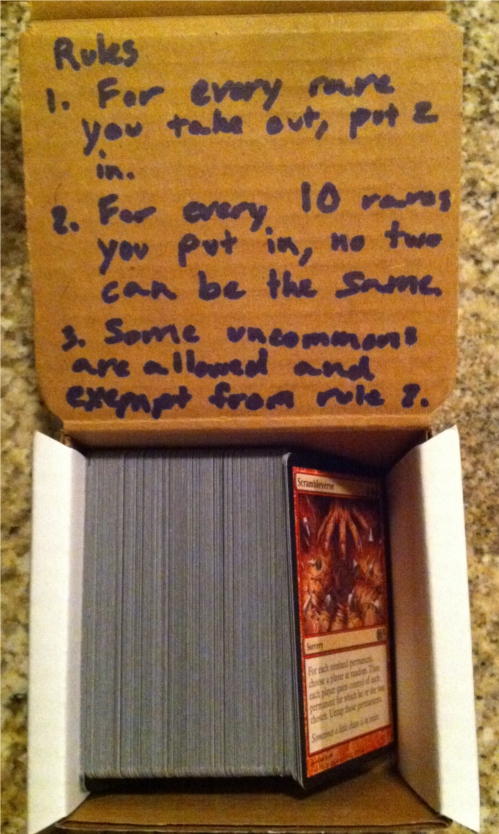 How to manage and cash out on this bad boy.

Starting, or restarting, The Bulk Box is not difficult. I tend to cash out the box once a month. I use Trader Tools, located at mtg.gg, to quickly pick out anything that sells above bulk prices. It takes about ten minutes, tops, and I usually have at least $20 to sell if I've been particularly active that month.

However, restarting The Bulk Box because you’re now stuck with a box of Red Sun's Zeniths and Goliath Sphinxes becomes tiresome, which made rule two a necessity. Rule three is new, and if I wrote this article two weeks ago it would not exist. Rule three is another great way to generate home-run hitting scenarios. There are some differences though. The list you actually present to people of commons and uncommons you will accept must be a list of ones that are worth at least 10 cents, so you’re always making a profit. It is useful to keep this list on you, and it was nice to have that stack of Timely Reinforcements (one of my better speculation calls) when my local game store sold out at a PTQ and I was able to value them at $3 each. I like to keep my list current and standard legal.

Following these guidelines will help you construct a Bulk Box of your very own, transforming you into a real life MODO Bot, able to generate dollars out of what appears to be the most useless cards in existence.