Hello everyone! With the newly released Dark Ascension spoilers fully revealed, I thought it would be a great time to do some speculating, since that's half the fun of trading!

I have always been a fan of Zombies, whether movies, books, or Left for Dead, they are pretty interesting creatures. Once I saw that Innistrad was going to have some Zombie support, I immediately got excited. By the time all of the spoilers were out, I already had a full proxied EDH deck with several cards preordered with Grimgrin-Corpse Born was my Commander.

He has been one of my favorite cards ever since he was spoiled and I can see him getting a boost in price. But why? Because of Gravecrawler, the new one-drop found in Dark Ascension. 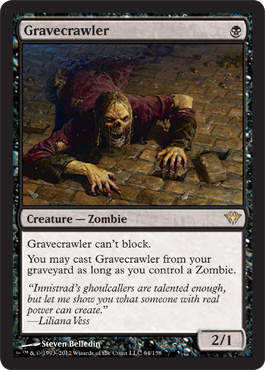 This card is amazing. Almost.

Gravecrawler has everything going for it: it's a 2/1 for 1 and can combo great with Grimgrin-Corpse Born, but it still needs a home other than a 1 of in an EDH deck for it to actually have a worthy price tag. With that being said, I think that might be its downfall.

Another card came to mind while I was thinking about Gravecrawler: Stromkirk Noble. Stromkirk Noble is a one-drop, and a very good one at that for Red Deck Wins. Stromkirk Noble did not have a role in Red Deck Wins until a couple weeks after its release, where it took off in price. It went from $3-4 to up to $12 at its height, now bellowing out at around $5.

My advice with Gravecrawler is to stock up, but realize when the right time is to get rid of them. In paper Magic, whether a card has a home or not, it is hard to get rid of a lot of cards unless you are able to frequently go to tournaments across the states.

I would not pick up more than 8-10 of these if you decide to. My general rule is to fill one page in a binder, of nine cards. That way I have a playset and a number not be hard to get rid of. And hey, if all goes wrong, at least you have a nice looking page!

Beyond the one-drops, let's take a look at all of the new Zombies that are coming out from Dark Ascension.

I have mixed feelings about Geralf's Mindcrusher. For Innistrad limited block, this card will be a great fatty, aid you in milling out your opponent (especially with it having Undying) and will even benefit you in the self milling decks, but other than that, I do not see it going anywhere in standard.

Does this card make you think of any card from Innistrad? Yep, me too: Skaab Ruinator. This card will be seen all over limited, not only is it a cheap x/6. Like Mindcrusher, I do not see it having any play in Standard as of this meta, but this may be a reason to force Blue if you get a couple of these in your draft early on.

There are always cards in the set that I do not understand why they were printed.

This card is one of them. For 2U, you can have our friendHeadless Skaab, which is much harder to get over, especially in limited. With that being said, this does have Undying, so this card will have its uses. What they are is yet long lost in a brewers mind.

I know that I am mentioning a lot of self mill limited decks, but this is the kind of deck that Innistrad and Dark Ascension compliment. Screeching Skaab is a very good two-drop for your limited self mill decks. Either this card or Shriekgeist will go very well in that aerchtype.

Yes this is a Zombie, but it really is not worth a spot in any deck. If Black Cat had Undying, this would be a totally different story, but it doesn't so I would suggest putting it back with your bulk commons.

Here we go. This is what we have all been waiting for. Some good Zombies! For BBB, you're almost guaranteed to make your opponent lose 4 life. And it's a 3/2, which isn't too bad. Bummer it can't deliver its two damage to your opponent or creature. If that were the case, this card would simply be great.

Let’s get the Undying engine rolling! Mikaeus comes back with revenge after getting bitten from a Zombie (I'm guessing here, as I'm not sure on the lore, but that is usually how one becomes a Zombie). And he's stronger than ever.

Even though it costs as much as a titan, it has Intimidation, which can be surprisingly helpful when U/W Delver is a common deck. After the Titans are rotated out, I see this card rising in value and will be a great EDH card nevertheless.

For 1BU this cards is great. Deathtouch is a very crucial ability with so many swords running around in the current meta, and the +1/+1 boost is a way to get even more bang for your buck. Especially after most of the new zombies get their own +1/+1 from Undying.

I think that this card has a lot of synergy with Grimgrin. You can activate Havengul Lich’s ability to give it Undying and then do a loop with Grimgrin’s untapping ability to keep giving Grimgrin +1/+1 while only paying 2. While this is an end game combo, since it is mana heavy, I think that it could be successful and at least make Grimgrin somewhat playable.

Speculate on the Speculation!

This is the biggest thing you can do during spoiler season! Why? Because everyone thinks that a certain deck is going to be the next big thing. So why not work with the contrast of their predictions and yours?

This brings us back to Grimgrin. I personally think that there will be a good deck with Grimgrin, Unbreathing Horde, and Gravecrawler, and I know many people in real life and Twitter that think the same. Most of the people interested in these cards will likely be of the casual variety, wishing to build fun casual and EDH decks, so consider your audience and trading partner's preferred formats when on the trading floor.

I cannot say that I am a trading mastermind. Not even close. But that is why we have social networks and a great selection of Magic writers online. Ask your friends on Facebook or some people on Twitter what they think! If the general public thinks a card is going south, it is probably too late to move them at a reasonable profit, so talk to people before it's to late and follow what the fantastic Insider writers at Quiet Speculation have to say.

So go out and brew up some cool decks and go speculate on Dark Ascension!

4 thoughts on “Better Double Tap, Because These Zombies Aren’t Dead Yet!”