I can honestly say that I haven't been this excited about the release of a new Magic set since Zendikar. The amount of money cards in this set makes it a great potential investment, and it doesn't hurt that it looks fun to play as well. I think Avacyn has restored my faith in the limited format, also. With no cumbersome flip cards to broadcast your picks to the whole table and removal spells that can actually kill some of the creatures in the set, this looks to be a great standalone draft and sealed format. I want to dive right into all the AVR content I found for you in just a minute.

First, though, I want to take you guys back to last year.

Last August, this article appeared on the website Gizmodo. Unfortunately for the snark-artist who crafted this article, the result was not quite (or exactly) what she had intended. Instead of a wave of condolences flooding her way consoling her for her wasted night spent with an uber geek, the internet turned on her and denounced her as the worst sort of high school bully and Finkel emerged from the fracas looking like the total class act that he is.

The result of this debacle was two-fold.

First, Finkel himself next leveled, getting brief albeit national attention for something other than his Magic prowess and the women of NYC realized he was one of the city's most eligible bachelors.Second is that the attention the Gizmodo article garnered on Reddit lead to Finkel doing an IAMA on the website, one that started the trend of the titans of the Magic community following suit and doing IAMAs of their own.

This IAMA is the one to read all the way through if you've never taken the time to read one before. Finkel gives some great advice on what's made him a success at Magic and at life that has applications outside of the game. Since he did this IAMA for the Reddit community at large rather than just the magic subreddit, the questions are less about the game and more about him, but it's still a great read.

I'm sure I don't need to tell anyone that the whole set has now been completely spoiled.

You've been following along like I have and mulling over each new card carefully. Now the sanctuary cat is fully out of the bag.

As much as I like to go to mtgsalvation.com to see an aggregation of all the spoiled cards as they are spoiled, I prefer the format of the mothership's full visual spoiler once the whole set is out. It's easy to browse given that you can sort by color and don't have to click individual hyperlinks to see the pictures.

The art, by the way, is phenomenal for this set.

Redditor taw got sick of waiting for an official draft simulator so he made a quick and dirty sealed deck simulator. It's not quite as easy to use as the sealed deck builder on MODO, but taw got this out in record time. The full visual spoiler has barely been out a day or two and already he has a simulator with every picture up and running. I'm blown away.

You can check out taw's creation right here.

What to Expect When You're Expecting (to play in the prerelease)

Tim Willoughby has anticipated your questions regarding the Avacyn Restored prerelease including some info about the Helvault and the set's mechanics. This is well worth the read.

This is a good resource if you want to be forewarned and therefore forearmed about how all of the set's mechanics work.

I'm sure you have a lot of questions regarding how many cards it fits and why throwing your wallet at your computer screen isn't working, and he answers a lot of them in his reddit post. Anyone who plays EDH could use a box big enough to hold 100 cards plus sleeves, but as a value trader I can see using this bad boy as a stash box to throw all of my dealer bait into.

It's a good idea to stash your cards in a deckbox that is distinctive enough that it would be easier to identify and recover if stolen and less likely to get picked up from the table by mistake. And this fits the bill. I tried ordering one on my computer, but they aren't for sale... yet. Besides, apparently my computer only takes round cards.

Finally, I thought I'd leave you with an amusing comic I found, complete with a spoiler for those of you who are into lore but didn't catch Wizards' latest announcement about Nicol Bolas and his EDL friends. Enjoy. 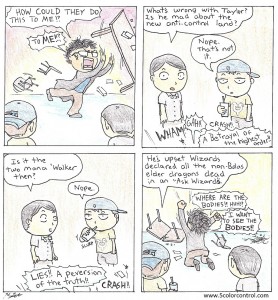 Credit given where credit is due.

Decklists From the Weekend

Ugh. I don't know about you guys, but I can't wait for AVR to become legal just so people have an excuse to brew a little.

In the Standard portion of the SCG Open in Birmingham, Delver took 4 of the top 5 spots. With the possible exception of Temporal Mastery (I am not holding my breath), there isn't a ton that obviously gets slotted into Delver builds, so the new set may bring some much-needed diversity to what is becoming a pretty stale format.

Two things brightened my day a bit, however. First, the non-delver in the top 5 was Zee Shan Babar's Heartless Summoning deck. I have always been a fan of this card, and every once in a while someone comes along and does very well and gives the rest of us hope. Sure, a 3/2 flier for U is unfair, but what if every creature in your deck is efficiently-costed and unfair? I'll take a 4/5 flying Fact or Fiction any day of the week.

Kris Casey's BUG control list in the top 16 was another bright spot in the midst of a bunch of stock Delver lists. I personally think his deck needs more Glissa, but he must have something going for him and he carved himself a nice niche in the top 16, finishing ahead of both of the top 16 Zombies lists, another notable.

We haven't been seeing many good finishes out of Zombies lately and it's good to see the servants of Geralf clawing their undead way back into the top spots. Both U/B and R/B zombies made appearances. Sure a 1 mana 3/2 is good, but I hear a 3 mana lava axe gets there, too.

Chi Hoi Yim, the event's winner, piloted a U/W build that made use of two Dungeon Geists, a card that has been seeing a resurgence lately. Half of the top 16 delver decks agreed that a two-of gets there. Congrats Chi Hoi Yim!

Perhaps whoever Zac Hicks beat out to make top 16, but other than that, you have to love this list. Making use of Hall of the Bandit Lord, this list continues to do well in a Legacy format ruled by the same 1/1 human-cum-insect beater plaguing Standard.

Maverick didn't make as strong a showing as usual, and it could be due to the white humans at the core of the Maverick nuisance engine taking a ton of splash damage from a red sideboard answer that kept the number of Stoneblade decks in the top 16 to a mere single showing. Sulfur Elemental is a force to be reckoned with and it appears to be here to stay.With split second and flash, he has been pantsing fields full of Lingering Souls for a while now.

Nice Force Of Will, bro. I think I'll be annihilating your board anyway.

Could this be the death rattle of a once-dominant strategy? Or will Stoneblade continue to finish well with its combination of cheap, renewable threats, countermagic, card draw,and the inherent unfairness of everyone's favorite Kor Artificer?

Eschewing long-game inevitability for a better mana base and room for cards like Life from the Loam and Fauna Shaman, both Maverick lists decide to forgo Punishing Fire in favor of... Elesh Norn?

Maverick continues to evolve in new and exciting directions, and the inclusion of Fauna Shaman reminds me of my favorite standard deck of all time. If Maverick starts to run Vengevine and Bloodbraid Elf, expect to see my name next to a few top 8s.

Personally, however, I think Punishing Fire is too good not to run, but these lists prove Maverick can do just fine without it. Perhaps the vaguest name for a collection of decks since "Death and Taxes", Maverick seems to be applied to any deck that runs Knight of the Reliquary lately.

I'm still waiting to see a blue variant do as well as it was doing last year. I hear Vendilion Clique once is good, Vendilion Clique every turn is better, and Knight of the Reliquary would be more than happy to get your Karakas for you. Rhox War Monk ain't afraid of no Mongoose. Geist of St. Traft plus a few exalted triggers? There has to be a deck in there somewhere.

That does it for this installment. Feel free to leave me some feedback or hit me up over in the QS forums where I've decided to become a regular. I'd love to chat about what you're brewing and hear what you want to see in future installments of this article series. I also plan to join the 21st Century and start tweeting soon, so watch this space for my contact info. I'd love to have you all as followers.