A couple weeks ago, the iconic painting “The Scream” by Edvard Munch sold at auction for a whopping $119,922,500. This placed Munch over Picasso in history as the artist with the most expensive piece of artwork ever sold. My reaction can best be encompassed by the central figure in the painting itself: 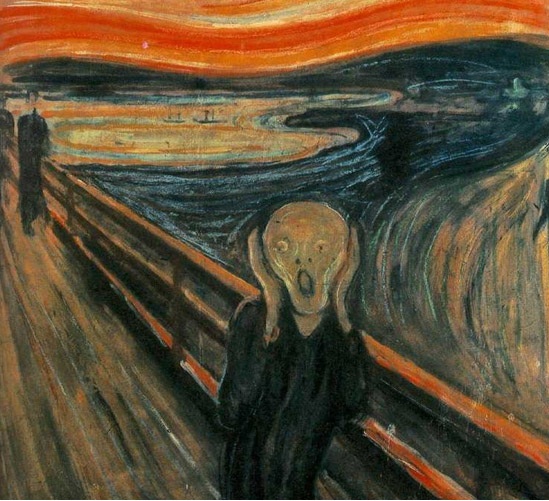 That is an incredibly large sum of money for a piece of artwork. No matter how much of a classic this painting is, it’s highly unlikely Munch could have ever imagined his work would fetch such a large sum a hundred years later.

What’s This Got To Do With Magic?

The iconic Alpha Black Lotus has appreciated significantly since its initial printing (albeit not to $119 Million). When I first began playing Magic, this card fetched around $300. As a newcomer to the game with no income on days other than my birthday and Christmas, this price seemed way too steep for a piece of cardboard.

Now, nearly twenty years later, circulated copies of this iconic Magic: the Gathering card have sold at auction for amounts in excess of $3,000 – an increase of 1,000%! 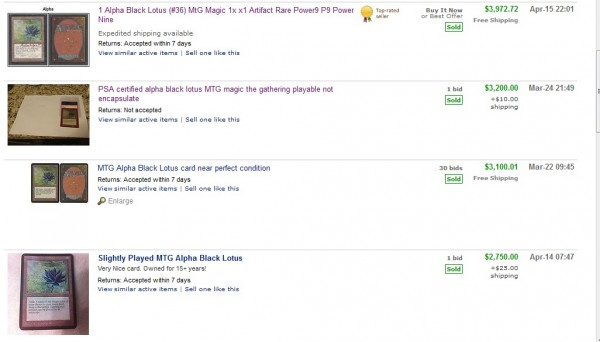 But these versions are circulated – they have seen play and they likely continue to see play in Vintage decks. There are far rarer versions of the Alpha Black Lotus – ones which are virtually unplayed in condition.

In fact the PSA-10 Mint Alpha Black Lotus has sold for upwards of $20,000 in previous sales. The [supposed] only one in existence is now for sale on eBay with an asking price of $100,000. Crazy? Yes! Crazier than paying $119 Million for a painting? Perhaps not.

Based on the most widely accepted numbers, each Alpha rare was printed about 1100 times by Wizards of the Coast. This count places any rare from Alpha high up on the list of rarest Magic: the Gathering cards.

But given these cards are nearly twenty years old, and most were played to oblivion, the subset of NM rare Alpha cards is even more elite. While it is impossible to garner exact numbers, even a generous fraction such as 10% NM would imply there are only about 100 copies of any NM Alpha rare card in existence.

Retailers have caught on to this fact – back in April, Star City Games significantly increased their buy and sell prices on NM Alpha/Beta cards only. They purposefully emphasize in their buy list that one should inquire about buy list prices for SP and MP copies. When we observe SCG is selling NM versions of Alpha rares at 2x the price of SP versions, we can certainly see why they’ve created this discrepancy.

But we don’t even have to lay out $20,000 to own a unique piece. Many NM Alpha rares are relatively much more affordable, yet they are still very rare and demand a healthy premium. NM copies of the five laces from Alpha, for example, sell for $100 on Star City Games and they are even sold out of some! Consider Lifelace, which is about as playable as Song of Blood, yet far rarer and more expensive.

Even though the card is not useful in tournament or casual settings, the simple rarity of the NM Alpha Lifelace has driven this card’s price up to surprising proportions. The card sells at 200x its 4th Edition price, and it even far out shadows the Beta version, which sells for only about one eighth the Alpha price. 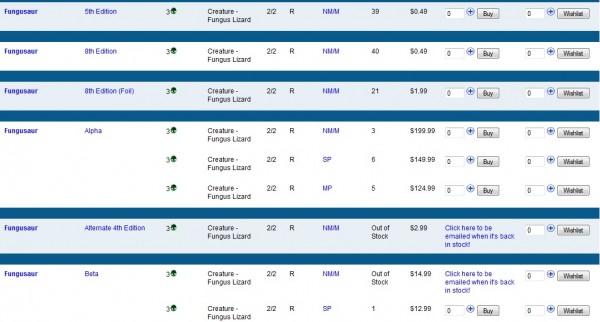 Anyone who has been playing this game long enough has opened one of these rares, and I’d even go out on a limb to say that virtually none of us were ecstatic to open this “crap rare”. Yet grab a NM Alpha copy of this beloved Fungus Lizard and you’ve got yourself a card that retails for $200! I’d wager a graded version with PSA score 8 or above may be even more expensive!

How could the Alpha version of this card be so expensive when it is so unplayable? My theory may surprise you…

Apparently there is a collector out there who owns at least 85 copies of Alpha Fungusaur. This picture is worth 1,000 words and well over $1,000: 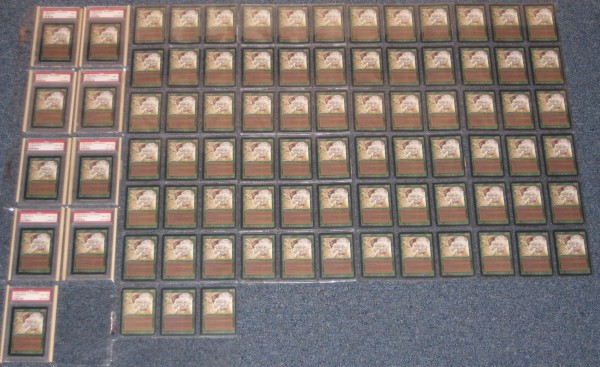 Owning 85 copies of almost any card in the game of Magic – even something like foil Jace, the Mind Sculptor – and you still haven’t even scratched the surface of the total quantity in circulation. Own 85 copies of any Alpha rare, however, and you can officially manipulate the market.

These 85 Alpha Fungusaurs represent nearly 10% of the total quantity ever printed. This single collector likely owns more Alpha copies than the largest 10 MTG retailers combined. The largest retailer in the world, Star City Games, boasts 14 copies for sale at the moment – about one sixth of what is pictured above.

When print runs are so few, price manipulation is a possibility. One could even “corner the market” in a particular Alpha rare. In other words, acquiring only 85 copies of an Alpha rare, no matter the card, is sufficient to manipulate the card’s price. As a result, a major retailer like Star City Games sells this unplayable card at twice the price as its unplayable counterparts in Alpha. And again, NM copies take the cake selling at $50 higher than SP versions.

What Should We Do With This Information?

I strongly discourage you from attempting to corner the market in any of these rare cards. To do so is very risky and profiting from the endeavor is not easy. Attempt to sell a significant quantity of stock and you’ll likely kill the price rendering the remainder of your collection worth far less.

Still, there is something to be learned here. NM Alpha rares are incredibly difficult to acquire. Some retailers, like ABU Games, have known this for a while now. Others, like Star City Games, are finally catching on and altering their prices to reflect this. Still other retailers such as Troll and Toad, as well as smaller eBay sellers, have not fully embraced this information.

As a result I've managed to snag not one, but two NM Alpha Two-Headed Giant of Foriys from a well-known retailer at the reasonable price of $55.99. This seems like a steep price to pay for another unplayable card, but a quick visit to Star City Games’ buy list and you’ll see that they are buying NM copies of this oldie for $60. Hence, I made an immediate $8 profit between the two copies I purchased.

These opportunities are out there. One other recent acquisition I made was a sweet PSA-8 graded Alpha Earthquake for $59.00. Although not pristine enough to command a major premium, Star City Games will still buy the card at $60 and sell at $100.

But the overall goal isn’t to make $1 here and there selling cards to retailers’ buy lists. Instead, I want you to consider the long haul. An unplayable NM Alpha rare may never reach the same prices as a Black Lotus, but collectors looking to complete their sets will need one Fungusaur for every Black Lotus. With Magic growing in popularity, combined with the fact that Alpha cards are perpetually aging, we have a recipe for significant gains.

Cards that once fetched pennies are now selling for $100. Could the growth rate continue? Will there be a point in time when NM Alpha Fungusaurs are so difficult to find that they will break four digit prices? Graded ones may…

These rarities don’t follow the normal ebb and flow of pricing like normal Magic Cards do. Instead of moving trajectories comparable to the stock market, they instead follow paths resembled by classic artwork. Incredibly sparse, NM Alpha rares (especially graded highly) can grow in price at astronomical rates as long as there is a market for them.

Perhaps five years down the line I will have my NM Alpha Two-Headed Giants graded in hopes of a boost in value. They may never be worth as much as a NM Black Lotus,  but one thing is for certain – if Star City Games feels they are worth acquiring at $60 each, I am certainly going to acquire them below that price any chance I can get.

You may want to consider the same.

12 thoughts on “Insider: The Rise of the Alpha Rare”