Magic: the Gathering is more than just a game. Because of the wild fluctuations in card values, rapid format turnover and strategy evolutions, Magic: The Gathering has acquired the characteristics of an economic model. There is supply and demand, and, in theory, an “Invisible Hand” which regulates the price.

There is even a bit of speculation, much like commodity markets such as oil and gold.

Sometimes basic economic theory breaks down and a more complicated model is required to explain people’s decisions. If everything was 100% rational, there would never be opportunities to profit in the market. Everyone would acknowledge identical card prices and everyone would base their valuations on the same variables. Trading would be exceptionally easy, but value trading would not exist.

Obviously, this is not the case.

Somehow, people’s emotions influence their decisions and this causes market inefficiencies. They often don’t even realize they are making sub-optimal decisions in their transactions. This week I will highlight a couple examples of how irrational behavior arises from competitive game theory.

Put on your thinking hats, as this one gets a bit technical. But awareness of these shortcomings could be invaluable at the trade tables.

Game Theory and the Prisoners’ Dilemma

According to Wikipedia, a Prisoners’ Dilemma can be defined as:

Aa canonical example of a game analyzed in game theory that shows why two individuals might not cooperate, even if it appears that it is in their best interest to do so.

In its essence, two people are engaged in a simultaneous decision where it would be in their best interests to cooperate, but due to the structure of their payouts, they end up mutually defecting. Thus, they forfeit the optimal outcome because of their own self-interest.

The namesake scenario involving two prisoners has been described ad nauseam on the internet, so I’ll provide a different example that I experienced firsthand.

While visiting family a few months ago, I was playing street basketball with my nephew. After seeing all the fun we were having, my niece and her two friends both wanted to play. Somehow we ended up with a game which involved picking them up one at a time to dunk the basketball into the net.

Dunk after dunk they each took turns playing. After each of the three girls had multiple tries at the game, they asked to play yet another round. I decided to try a harmless little experiment. I told the girls, who were no older than seven, that to continue the game I needed them to choose the order in which I should lift them for the dunk. 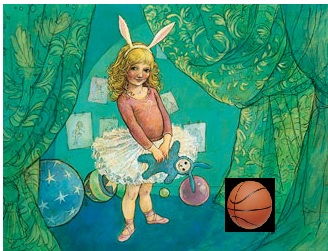 This did not go over well.

Rather than cooperating by agreeing on an order to play, they each “defected” and insisted they all go first. The result – all three girls received poor “payouts” and the game abruptly ended. Because they all wanted the best payout (going first) and they did not want to let the others have this payout, the result was a poor payout for all three of them (no one played) even though if they had gone one at a time, it would have yielded a better payout for all three of them. Thus, even small children are not immune to the Prisoners’ Dilemma.

What does little girls playing basketball have to do with Magic finance?

Well, have you ever spent ten minutes leafing through someone’s trade binder, pulling out all these exciting staples you’re looking to pick up, just to find out your trade partner wants retail values on their cards but cash value on yours? There are many sharks on the trade floors, and some are less subtle than others about their end goal. But if they are too aggressive, then you are most likely to walk away without completing a trade – a disappointment for both parties.

Here is what the 2x2 matrix of this simultaneous “game” looks like:

Just like the Prisoners’ Dilemma and the basketball game, the outcome here based on Game Theory is [tragically] the top left quadrant – players are so concerned with losing significant value on a trade that they themselves trade aggressively, seeking value. Even though two value traders could agree to “cooperate”, putting value second and mutual appreciation first, each trade partner wants to avoid loss in value and confidence and so they “defect” to the aggressive option. This is ultimately why it’s very difficult for two sharks to trade amicably.

So next time you find yourself unable to make a trade with someone because they are being aggressive, try taking a step back and figuring out if an amicable outcome is possible through cooperation. Sometimes an honest comment about your partner’s trade practice could be all it takes to break down the barrier.

I recently read about the concept of price anchoring in Dan Ariely’s behavioral economics book Predictably Irrational. In short, the concept of price anchoring suggests that when a person is unfamiliar with how to “value” a particular item, they are impressionable by a [potentially arbitrary] place to compare to. There are many examples cited in the book, but I’ll try to use a Magic example.

Without looking, what is the value of a Promo Foil Gaeas Cradle? If you have no clue, I bet I can influence your guess. Let’s say I showed you the only active eBay listing for this card at the time of this article:

If you really wanted to purchase this card, you would shop around at different sites and determine that anything less than $239 is a good price. For example, Star City Games is selling SP copies for $200. This seems like a great deal, especially because eBay prices are frequently cheaper than retail and not the other way around.

Now, let’s say you pulled the trigger on the Star City Games SP copies, since $200 seemed like a great price relative to your initial anchor, the single eBay listing. Well, perhaps we should have checked eBay completed listings before buying because we’ll see something rather surprising: 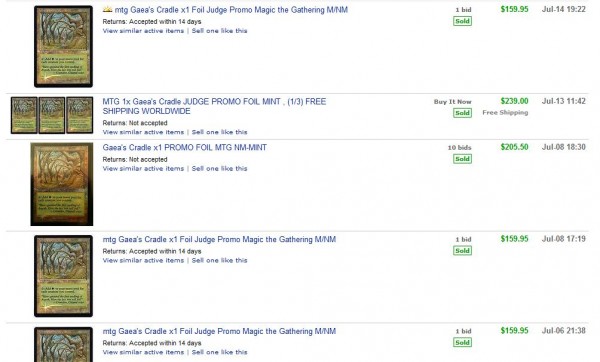 Uh oh…your $200 price doesn’t seem that great anymore does it? And even though someone did pay $239 before, we now see that this price is just ridiculous. If you had first done this search to establish your “anchor”, you may have thought that the $200 price tag at Star City Games was a bit high. Clearly if multiple copies of this card have sold for $160, this should be the card’s value. Now to consider buying any copy above that price seems like a losing concept.

This type of predictably irrational behavior can enable you to influence trades significantly. If you saw one of these Promo Gaeas Cradles in someone’s trade binder and they were unsure how to value it, you should theoretically show them these eBay completed listings first. You could say “well, at auction these have been selling for $160, so I can value it at $180 in trade”. If you looked up only active listings, your trade partner may be inclined to say “well, there’s only one left on eBay at $239, so I’d like a value around there”.

With the examples from the book I mentioned, combined with a Magic-specific example of my own, you may see how you could influence trade values. This won’t work with every trade – many traders know the value of their cards already (although this just means they have a price anchor from somewhere else already). But in the case where you can choose the price anchor (i.e. you get to pick which site you look up card prices for a trade), you may be able to honestly sway trades in one direction or another by referencing strategic price anchors.

The Prisoners’ Dilemma and price anchoring can both manifest themselves in the realm of MTG finance in different ways. Understanding these concepts and the rationale behind them can help us become more well-rounded traders.

These ideas are not meant to enable readers to bully their trade partners or “trick” them into believing misleading pricing information. The knowledge can instead be used defensively. That is, make sure you search a couple sites for pricing on a rare card. Don’t let yourself get pushed around in trades, but you also won’t benefit from doing the pushing yourself.

There are a couple more of these economic concepts I would like to discuss, but I’ve run out of room here. I petition my readers – would you like me to continue next week with part two of this article, or would you prefer I return to a more traditional topic? My readers are valuable to me, and so I will make sure I appease the majority with this decision. As always, thanks for reading!