So I was just mentioning in the forums that I was surprised nobody was talking about this card: 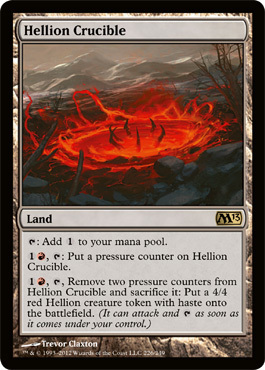 What’s not to like about it? It’s a “free” 4/4 with haste, isn’t it? If it were a “come into play tapped” land, I could see it having a huge downside, but it still allows regular tempo should you need to play that T4 DOJ to survive and instead you rip a Seachrome…

At best (proliferate aside, even) it’s a T3 drop & charge, charge T4, crack T5 for a 4/4 … but that’s ONLY if you devote all of your time to charging it! And even then, if you have no plays T3-> 5 you really should just be thankful that you can get something that can threaten a Restoration Angel in a pinch. It may get even buy you that T6 to actually draw yourself out of your predicament. Pray for Terminus?

Not only good in RDW!?

Some people may initially look at it and automatically assume it’s something that would only be played in mono red aggro style decks. But what’s preventing it from being the finisher in a control deck? Or just being a supplemental 2-3x in Wolf Run right now?? UR Delver may appreciate this spicy little morsel to add to their arsenal, as it allows them to counter relevant spells, or if nothing is played add a counter EoT and with Hellion.

^ That right there is pretty awesome in itself: May not be able to make the air block on a Delver / Angel, but if either of them are left behind to block, they brunch & Mr. Hellion survives. There is nothing in the Delver deck that stands toe to toe with a Hellion token and survives solo. They pray for Vapor Snag I guess?

Why is this card good?

Here are a few points on Hellion Crucible that makes me really like it, exploring its potential:

So many other good “combos” that really aren’t even combos, just good synergy with different styles of decks. And soooo many different decks can use him!

So what decks can use this right now?

To name a few:

And that’s not including any R based control decks that may want to include it. It’s just so versatile it can be played in anything supporting an R in it’s CC. 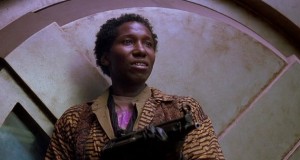 A wise man once commented that “If none of the ISD lands are over a buck I doubt this will be there”. Ah yes, but we are forgetting that Wolf Runs were commanding a $3.50 premium, and Moorlands a solid Toonie (… $2) for a long time before falling into obscurity / market flood.

I agree that spending $1 each is a risk, and they could very well take the plunge to $0.25. BUT they could also be on some deck tech somewhere and / or some pro could release a blog post in praises harmonious with my own to make the card seem incredible and *BOOM* your chance is over.

Channel Fireball currently has these at $0.99 on TCGPlayer, and the cheapest is “the mana fix” @ $0.94. eBay is, however, looking grim for our hero with prices around $2.12 / playset being the norm. The auctions are going as high as $8 however, which is strange. BiN is at lowest $3.96 for 4x on eBay by ChannelFireball as well, so they must know something we don’t!

"Carl, you told me my Visions of Beyond were going to be worth something... they're not! I hate this card, and I hate you too!"

I wish I had the ability to see into the future and always offer you a sure thing on a silver platter, but speculating doesn't work like that. Even if you hate my pick, be sure to look at how it was that I came to my conclusions so that you can do so for yourself next time. Being able to evaluate cards for yourself is a skill that needs to be honed and practiced. You dont have to be perfect, just have a reason for why you think the way you do and see if it pans out. Look for things like:

Until next time, may your specs burst forth for you like a giant, writing, gold-plated hellion that you cheated into play a turn sooner by proliferating. (Because we all love to proliferate at times, yes? :))

[Editor's Note: The original article featured inaccurate information regarding Hellion Crucible and has since been corrected. We apologize for the mistake.]