Every indicator suggests that Return to Ravnica is going to be a blockbuster set. I have never seen booster boxes pre-sell so rampantly and I’ve never seen so much excitement about the power level of so many cards in the set.

To be a successful speculator, it’s often optimal to reign in our enthusiasm and keep our emotions in check. For some of the reasons I’ve discussed in my previous articles, we cannot let our irrational tendencies get the best of us during a time with so much hype.

It’s actually quite similar to the stock market – I always strive to sell during market rallies and buy while everyone else is paranoid. This requires nerves of steel at times, since it’s difficult to dump tons of money into an asset that is shrinking by the day. But if you have confidence that the market will once again hit new highs, you should rest assured that your stock will be safe as long as you’ve purchased shares in a strong company (chart from Yahoo Finance). 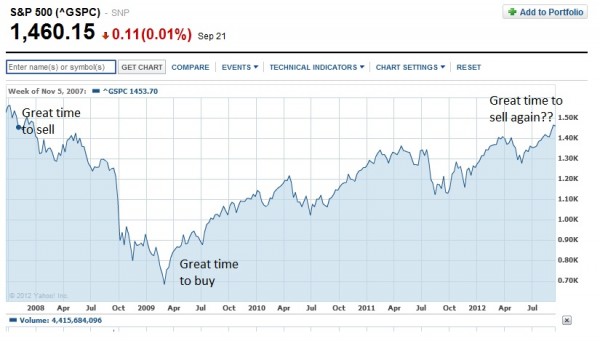 What I’m trying to get at is the fact that Magic right now is at one of these peaks. Return to Ravnica is expected to sell better than any previous set, and Magic’s player base will be at an all time high. We can use some concepts from economics to assess what moves we should make with our Magic collection in anticipation of the anticipated spike in popularity.

Many Magic Cards, much like the S&P 500, are nearing their highest highs. As tempting as it is to jump in on these rallies, it’s often a risky endeavor to buy near such peaks. So keeping this in mind, let’s evaluate some cards near their highs that perhaps should be sold for profit taking while the selling is good.

First, take a look at Woodland Cemetery’s chart from blacklotusproject.com. 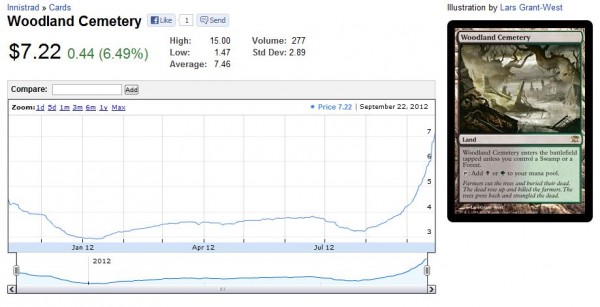 This card has risen in value so quickly that blacklotusproject can’t even keep up with the price. The card is retailing for $14.99 at Star City Games and it’s averaging $11-$12 on eBay. This is my number one sell call as of today. Zendikar Fetch Lands barely broke the $14.99 mark on Star City Games, and I bet you the Black/Green Verdant Catacombs didn’t reach these heights. There are more players in the game nowadays to drive demand up high, but it’s very unlikely you will have such a guarantee to make $10+ selling these than right now.

Blacklotusproject.com has had difficulty keeping up with another card’s price jump: Falkenrath Aristocrat 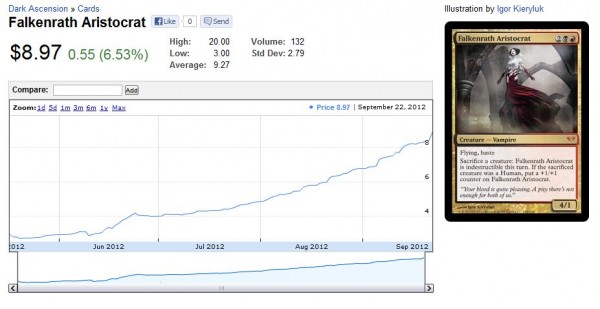 This card has gone from nearly bulk Mythic status to sold out at Star City Games for $17.99. I understand this is a sweet Mythic Vampire from an underdrafted set. There may even be some additional upside because of this. But holding onto your copies of this card in the hopes that it hits a “52-week high” every day is a bit reckless.

If you’re risk-averse like me and you’ve already doubled or tripled up on this card, take some profits off the table now while you can sell some copies of on eBay, keeping just a few behind only if you really think there’s more upside after Standard rotates and the entire metagame shifts.

I wanted my last sell suggestion to be an Eternal card. I thought extensively about what Legacy staples would be wise sells at this point. And while there may be a few, nothing was nearly as compelling as Standard cards. It just goes to show you how robust Legacy staples truly are cost-wise. So for the Eternal fans out there, you’ll probably be more interested in the Buy Low section.

The final Sell High suggestion I have is one that according to blacklotusproject.com has already begun a gradual decline.

Bonfire of the Damned got a lot of attention during its spike. But since Return to Ravnica spoilers began, I haven’t heard much about this card. Yet it’s still selling for $35 at auction! Like Falkenrath Aristocrat, this Mythic Rare is also from an underdrafted set. But I am more confident that selling Bonfire now is a good move versus the Vampire.

You could almost create a rule of thumb here: if blacklotusproject has caught up to the price hike of a given Standard card, there’s a good chance the hype is over. Perhaps this is worth expanding on in a future article…

If many hyped Standard cards are near highs, something else must be near price lows. I’ve got a couple ideas of what to buy across multiple formats.

Although it’s been mentioned before, I want to emphasize how cheap Scars of Mirrodin Fastlands are right now (chart from blacklotusproject.com): 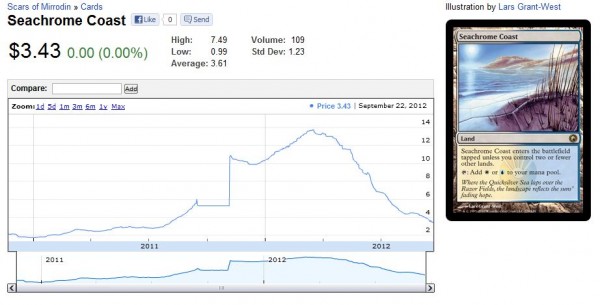 When Modern was announced, everyone swooped in and bought tons of Ravnica Shocklands. But most people, including me, ignored Filterlands from Lorwyn block. I think, perhaps that was a mistake…

Take a look at the blacklotusproject.com chart for Mystic Gate, the Filterland parallel to Seachrome Coast: 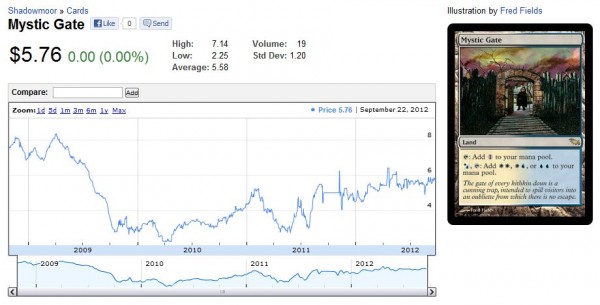 Since Mystic Gate rotated back in 2009, the card has doubled in value. Filterlands see play in Modern and EDH, and so their value has gradually increased much like many Eternal cards do. I see no reason why the Fastlands wouldn’t follow the same pattern. I bought a set of 20 of these just last week at under $3/land and I hope to acquire even more through trades once Return to Ravnica is released.

That’s not all I’m buying into, however. I am also buying a relatively under-appreciated Dual Land: Bayou. The Black/Green Dual Land just has not kept up with the increases of its counterparts, and with the printing of Abrupt Decay, I feel like Bayou should eventually catch up. Take a look at the comparative chart from blacklotusproject.com, which highlights my point. 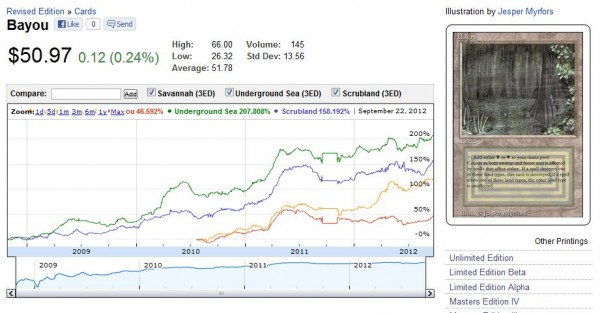 It seems that in winter 2010/2011 and again in spring 2012, Bayou missed out on a rally that some other Dual Lands participated in. Much like the gold/silver ratio inevitably returns to a mean, I feel the Underground Sea/Bayou and Scrubland/Bayou ratio should also revert back to its mean.

Lastly, I want to mention a card which, barring a major reprint in a Dual Deck, is destined never to drop in price again. Of course I am referring to Jace, the Mind Sculptor (chart from blacklotusproject.com). 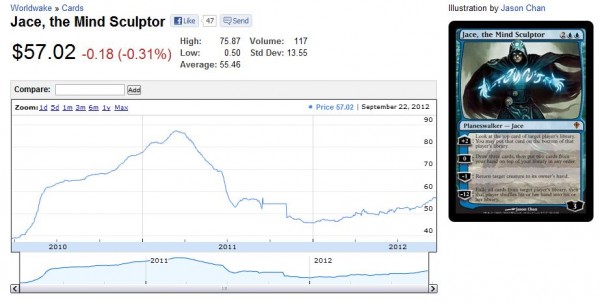 While at its peak of almost $90 at auction, this card was the best form of liquidity you could own. The card was literally worth its weight in gold. After its banning in Standard and then Modern, the card saw a dark time where it was worth a “mere” $50. But as time passes, this card will eventually continue its climb. It may never hit the $90 price tag it held during Standard, but the scarcity of this card is a universal truth and you’re more likely to find Dual Lands in a player’s trade binder these days.

The main message to take away from this article is that I always strive to do the opposite of the market. This applies to my strategy in the stock market as well as the Magic Card market. Buying surefire staples like Scars Fastlands is such a wise investment while their at their “52-week lows”. By the same token, selling those hyped cards near their “52-week highs” is sure to net you ample profit.

Is it easy to time your transactions perfectly? Certainly not. You can drive yourself crazy trying to sell your Standard cards at their absolute peak, just like trying to pay the lowest amount possible on eBay for a Bayou will drive you insane! The key is to get in while no one is talking about a solid card and to get out while everyone is talking about a solid card.

Back by popular demand, here’s another set of random facts I’ve noticed recently in the Magic Finance world.