A profitable transaction always feels satisfying. Being able to find a discounted card and flip for profit is nice – speculating on a card and watching it catch on is even nicer. It’s truly a rewarding hobby.

With this in mind, I often strive to achieve as many profitable opportunities as possible. Whether I’m trading, selling online, or selling to a dealer, I always love the gratifying feeling of making money on Magic Cards. Perhaps this satisfying feeling is the emotional motivator that keeps me going in this hobby even though I rarely have time to actually play the game.

But sometimes I wonder if this greed for profitability is a hindrance. It drives me to emotionally charged decisions, and based on all that I’ve observed and read I should not be defaulting to emotions when running the MTG Finance gauntlet. Often times the best profit comes from patience and emotional neutrality. 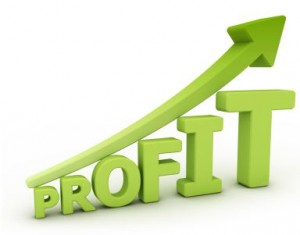 My propensity to snap-sell cards for profit may inhibit my absolute performance due to acceptance of lower profit margins. This easily calculable factor is a key driver for business growth and success. There aren’t many companies around the world that are content with their current profit margins – we would all like them to be greater. Sometimes there is a difficult balance between emotions and profit margins, and I want to do my very best to explain (justify?) why I settle for lower margins so often.

Card prices are in constant flux. As Magic grows in popularity the opportunities will become more frequent, but some may also be short lived. This is especially true thanks to the modernization of Magic. With live internet broadcasting of premier events, net decking, and endless forums, many cards are exposed to their fifteen minutes of fame. The most recent example was Nivmagus Elemental, a card that saw a tad of hype for about fifteen minutes while highlighted in a Pro Tour Feature Match.

Like Nivmagus Elemental, many cards don’t maintain their higher prices. And in some cases the price drop could occur at a moment’s notice. A card like Gravecrawler has seen peaks and troughs as Zombies succeeds and fails in Standard (chart from blacklotusproject.com).

Because of these price fluctuations, I’m often quick to sell when I can profit. If I had purchased several copies of Gravecrawler at $4 back in July (I think I did, actually), I’d be inclined to sell them as quickly and as conveniently as possible as the card’s price rises. Therefore, when a desperate dealer offered $6 on the card, I was more than happy to sell. Even though the card was still on an upward trend, I was way too concerned that there would be a significant price drop. Rather than extend the risk of owning this card, I was sure to move it right away.

More recently, I jumped on two play sets of Sphinxs Revelation. Below is a snapshot of the deal I found on Amazon.com:

Within days of placing this order, Star City Games increased their buy price on Sphinxs Revelation to $6 and sell price to $13. Seeing this sudden increase, I was faced with a dilemma. Do I hold out and hope this Mythic Rare continues it’s drive? Or do I cash out, freeing up some profits for a subsequent purchase.

This card is very metagame-dependent. Now that U/W control strategies are thriving in Standard, Sphinxs Revelation is well positioned. But once Gatecrash is released, that could easily change. Rather than hope the metagame remains constant, it seems like a safer bet to expect change. With this assessment in mind, I decided to sell. Four copies sold on eBay for $41.99 and the rest were traded / sold to a local dealer to $8.

Could I have made more? Possibly. Do I feel rewarded and emotionally charged from this successful speculation? Absolutely. And emotions are likely to win in a case like this.

The concept of opportunity cost has been discussed multiple times before on this site – both in articles and the forums. In short, owning cards locks up funds and may prevent you from investing elsewhere. If I hold fifteen non-blue Zendikar Fetch Lands in anticipation of a price rise, that equates to about $120 of funds tied up in this asset. This is cash that I can’t use elsewhere.

So, if non-blue fetch lands end up spiking significantly then my choice was a wise one (chart from blacklotusproject.com).

But if these cards only increase marginally and/or gradually, perhaps my money would have been better suited elsewhere. For example, while Arid Mesa has increased nicely since July (about $2), could another R/W land have increased more in this time window? How about this one: 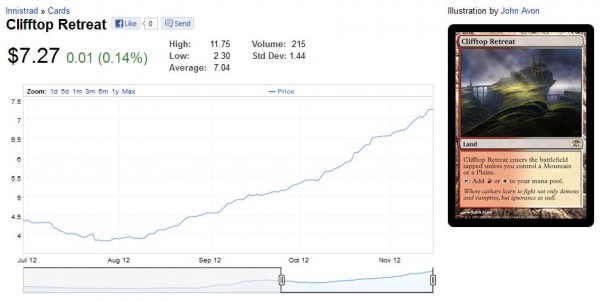 Clifftop Retreat (chart from blacklotusproject.com) has gone from $4 to $7.50 in about the same time period. Not only is this a greater absolute gain vs. Arid Mesa, but the percentage gain is substantially higher. Arid Mesa has seen a 25% increase while Clifftop Retreat has risen 67% in that same time frame.

So if I bought a few Arid Mesas at $8.50 a few months ago and sold recently, did I maximize profits? Arguably, no. Everyone expects non-blue Zendikar Fetch Lands to follow their blue counterparts and see a significant price bump due to Modern. But to me profit is profit. And selling those Arid Mesas freed up my cash so that I can speculate in something else. This ensures high turnover in my stock and shields me from significant risk of holding cards which are not top performers.

The final motivation for cashing out prematurely I want to touch upon is the irrational fear of losses. This is the most emotional motivating factor and perhaps the most costly. I’ll describe the concept with an example that took place just this past week.

A couple weeks ago Star City Games decided Jace, the Mind Sculptor was too cheap. They decided the price should be higher and they increased their buy price to $60 and their sell price to $100. Naturally, the internet reacted immediately and the “invisible hand” of economics shifted the price up significantly.

During this bump I noticed copies of the Planeswalker were selling out all over the place. eBay cracked $80, Amazon was even higher, and of course most retailers sold out. I found a copy at Card Shark selling for $69.99. Thinking this card was surely going to hit $80 at least, I pulled the trigger.

When the card arrived things had calmed down a bit. While Star City Games hadn’t changed their pricing, eBay had at least settled down. Copies were reliably selling in the low $70’s and I couldn’t even recoup my costs by selling. This created an internal dilemma.

To hold the card was to carry a double-edged sword. If Jace were to be unbanned in Modern, for example, the card could have no price ceiling. But unbanning of Jace in Modern seems unlikely. Even if it was possible, Wizards of the Coast has made it clear they want Modern to be affordable. A reprint would surely be on the horizon.

Because I didn’t want to be stuck holding a $75 card (opportunity cost), I started pushing the extra Jace. But there were no takers. Already I had felt like I was destined for a loss with potential for greater downside. The loss was so unbearable that the first dealer to offer me $70 was the proud owner of a new Jace. (chart from blacklotusproject.com)

Here I am fairly confident the decision was not technically correct. I should have held out and sought at least a trade outlet if not an improved selling price. But I was unhappy even with losing a few bucks on the card already that I had developed an irrational fear that I may lose more. Wanting to avoid being left with a “hot potato”, I cut loose and ate the $4 loss.

There are some benefits to being anxious to sell. I rarely lose excessive amounts on an investment and I keep high turnover in my binder. Opportunity cost is also rarely an issue for me.

The cost of this, however, is that I must accept a lower profit margin sometimes. Being quick to sell doesn’t always ensure the greatest payouts.

This is where my emotions come in. By justifying my actions with the rationalization that profiting from a hobby is an invigorating pastime, I’ve overcome disquiet from suboptimal business. This could be for better or worse. From a logical standpoint you could say I am “not doing it right”. But if I’m making money and having a blast, I don’t really care.

17 thoughts on “Insider: Why Settle for Less”