Ever since mtg.gg was launched I have fallen in love with the buy list concept. I often unload many cards at prices close to what I’d be earning after fees on major sites like eBay anyway. With buy lists there’s the added bonus of not dealing with excessive listing process. What’s more, there’s no risk of dealing with obnoxious buyers or receiving unmerited negative feedback.

I also love how some retailers pay above-bulk prices on somewhat arbitrary rares. You want to buy my Crimson Hellkite at $0.20? Sure thing! You want my Demonlord of Ashmouth at $0.15? Why not? When there are hundreds of copies of a card under $0.50 on TCG Player, I’m frequently satisfied with $0.15-$0.20 on bulk rares would otherwise rot in my binder. 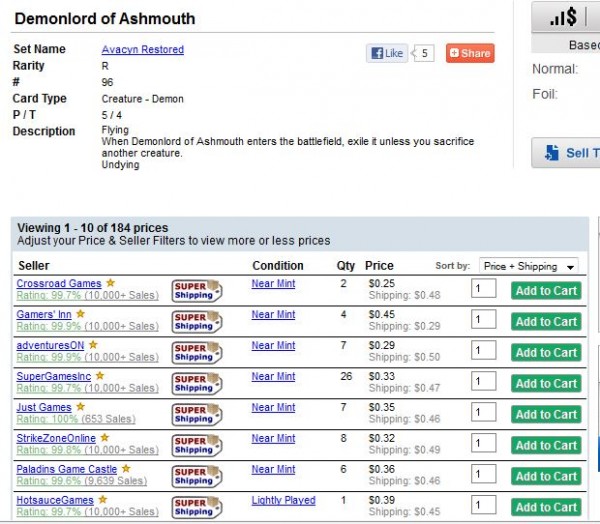 Last night I threw together a buy list order to Card Kingdom when I found myself encountering one of the tougher questions when it comes to buy listing: how do I want my payment? While simple on the surface, this multiple-choice question can really have an impact on both the amount of value you’ll get from your cards and the time it takes for payout.

Last night was particularly tricky for me. A few of the cards I was unloading I was admittedly selling at a small loss. This includes Domri Rade (chart from mtgstocks.com), which I will boldly claim is not done dropping in the short term.

I also sold some Sphinxs Revelations. I acquired a few at decent prices and they were paying $16 a copy. But while these two cards made up about half of my total sale order, I wasn’t as enthusiastic about this sale as I have been with previous orders. I took some risks which in the short term haven’t paid out as I’d hoped.

Then when I was faced with the payment decision, a thought occurred to me: sending cards in for trade credit instead of cash may not be a bad idea! Cash is always king, but there are some instances where trade credit is not only acceptable but even preferred. Let me give you an example.

By now, everyone probably knows I am a fan of sealed product. These are great investments which are sure to preserve capital while providing plenty of low-risk growth opportunity. It only takes two years or so for one of these investments to pay out. Recently, growth has begun even sooner – consider Innistrad booster boxes as a prime example, which currently sell on eBay for nearly $120 shipped. 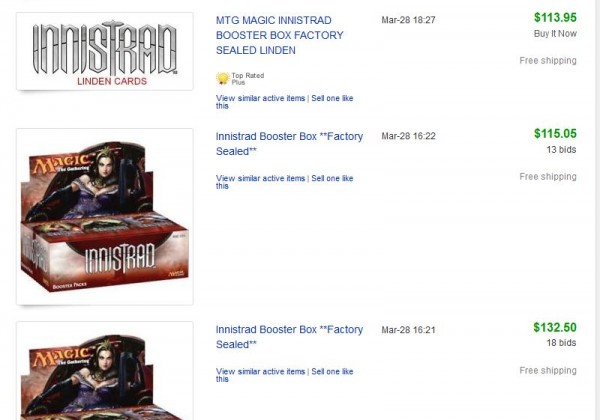 I’m always keeping a close watch on recent booster box prices to make sure I buy into the right sets before they take off. Innistrad hit my radar the other day when people starting discussing how foil copies of Liliana of the Veil sell for $150. While Liliana is no Jace, she’s still a highly desirable eternal Planeswalker. And while Innistrad was printed in massively larger quantities than Worldwake, I think $200 booster boxes of Innistrad are likely in a couple years.

So I decided I would buy a few. I purchased one on eBay last week and I begun my daily searches for a fair price on another.

Last night I was about to click “submit” on my buylist when something caught my eye: Card Kingdom (along with some other retailers) pays a cool 30% bonus on trade ins. Reading the fine print, it seems like that store credit could be used to purchase anything from the store…including Booster Boxes. So I humored myself with a quick search – turns out Card Kingdom had 28 Innistrad Booster Boxes in stock for $119.99. Not quite the cheapest, but certainly an acceptable price considering I’d be getting a 30% trade in bonus for my cards!

Online retailers are competitive with their sealed product pricing. So if I want to stock up on sealed booster boxes, this could be an acceptable route. I figure even if I have to pay $12 for shipping, I’d only be paying a 10%-15% premium for purchasing this box at retail. This is more than the 30% trade in bonus Card Kingdom provided, so getting credit seemed like an obvious choice.

Which begs the question: have I been doing this the wrong way all along?

Singles, and the Key Comparison

I recognize that I’m a bit more passionate about sealed booster boxes than most. Perhaps you read through the above and found it irrelevant because you live in a different country and retailers won’t ship booster boxes to you. Fortunately I thought of this and I have an idea.

If a retailer is paying 30% trade in bonus on buy list orders and you are planning to take the cash, at least first consider store credit. The 30% bonus is not something to sneeze at – this number adds up quickly, and it would behoove you to at least do a few quick searches on the retail site you’re selling to before clicking the check or PayPal button.

Perhaps there are some singles you need rather urgently. Perhaps there are some obscure cards you’re looking to acquire, but no one in your LGS has a copy. Or perhaps you have a friend who is desperate for a certain card and would be willing to give you a profitable trade for it. All of these scenarios would merit at least a quick search on the retailer’s site to see how much of a premium they demand vs. eBay or TCG Player. If that premium is smaller than the trade in bonus, then taking the credit is a mathematical no-brainer.

Trade credit could also be saved for a future speculation opportunity. Having $100 in store credit on hand from selling $70 of cards could mean you can go deeper on a new speculation target than you otherwise would have.

If all of this fails, then there’s one last fall-back idea I can think of – buying fairly prices staples. For example, if you had some trade credit at Star City Games you could buy some regular and foil Steam Vents.

Sure, SCG’s price on NM copies of Steam Vents are probably a buck too high to really be a decent price. But since SCG pays a 25% trade in bonus on buy list orders, you could do worse than sinking some credit into Steam Vents, even if their price is 20% too high. Plus there’s always upside potential from sitting on Shock Lands. Foil prices are also reasonable, albeit a tad higher than I’d like.

And if Shock Lands aren’t your thing, there’s always Scars of Mirrodin Lands and Worldwake Man-lands, which are pretty cheap nowadays. Some Standard cards may also be solid buys as we enter Standard PTQ season. Something like Supreme Verdict has been on a steady incline lately, with more upside potential as we prepare to say goodbye to Terminus in Standard (chart from mtgstocks.com).

If worst comes to worst, there’s always the hot casual card worth searching for. A retailer may have a competitive price on something like Platinum Angel, which has been on the move of late.

After reading through this entire article, if you still default to selecting the check option when selling cards to retailers, I can't fault you. As I said earlier, cash is always king. Taking cash means you’ve converted your current MTG positions into the most liquid position possible.

All that I ask is that you at least consider that trade-in credit for a couple moments. If you can find some singles with prices not much higher than auction, this could be a viable alternative. With thousands of unique cards in the game of Magic, there are bound to be a few competitively priced singles each retailer may have overlooked. If you don’t want to search through endless singles prices, think about grabbing some sealed product, even if it’s to draft with friends.

The bottom line is that when we are buy-listing cards to a retailer, it’s not because we’re quitting Magic. It’s often to obtain some cash which we intend to use to speculate on more cards. So if we’re thinking about buying cards or sealed product in the next month or two anyway, we might as well check prices at the retail site we’re selling to. If the premium they demand on their site is less than the trade in bonus on cards you’re selling, you’d actually grind greater value taking the trade in credit vs. cash to acquire the MTG cards you were planning to purchase eventually anyway.