Don’t you love the feeling of making profit on a speculative buy, even if it’s just a couple bucks? Recently I made a foolhardy bet on Didgeridoos which happened to pay out. Even though I netted a measly eight bucks, the emotional victory was much greater. I believe this Twitter response best sums it up:

Why Does This Matter?

If you’re like me, then you get excited about making any money on Magic. Sure, making 100% gains is nice but even making a few bucks on an underpriced eBay auction still gives me a rush. Knowing that my Magic account is gaining, even in small increments, is rewarding. I am the type who strives to maximize down to the dollar.

But this shouldn’t stop with silly, speculative plays like Didgeridoo. I should seek to muscle as many dollars as I can on all my cards. Whether I’ve made fifty or five dollars in profit, I still value each dollar equally. And since I know even small profits are meaningful to me, I should treat every incremental buck as another small victory.

I did just this at GP Providence this past weekend. Most of you probably already know I decided to sell out of Legacy at this event – I won’t bore you with this topic anymore since I know people have tired of this debate. If you want some more details as to my motivation, ask me in the forums or via PM.

It will be much more informative for me to take you through the procedures I followed in order to maximize every dollar I could. Because of my diligent efforts, I took in about 15% more in sales than I initially projected. In silly magazine headline fashion, I present to you: Five ways to maximize sales of Legacy and larger ticket items at a GP!

Tip #1: Do Your Homework Beforehand

The big ticket items will naturally be the cards where the most money can be made or lost. Haphazardly jumping from vendor to vendor at a Grand Prix can be time consuming and prevent you from maximizing value. Before you even think about vendors, you should first use mtg.gg and other online buy lists to determine which stores are paying highest on all your major cards.

I ended up creating a spreadsheet of said cards. Included in the spreadsheet was the card name and quantity to sell, condition, top NM buy price on mtg.gg, store paying that top price, and an approximate multiplier to account for condition. Here’s an example from my spreadsheet:

These were the numbers I worked with for my Dual Lands. It’s a little cluttered, but the information was incredibly helpful. You will see the first column of prices reflect the amount I would be willing to take for each set of Duals, total. These values reflect an estimation of mtg.gg buy price, condition, fees, and etc. The next column shows the top buyer for each Dual, followed by the price those buyers are advertising online. The last column was a last minute addition. As it turns out, MTG Deals had some of the highest buy prices on NM Dual Lands. But they’re not in mtg.gg. So I simply created a separate column to show what MTG Deals’ prices were on anything higher than top mtg.gg price.

When I sat down with buyers I knew exactly how much I wanted. The buyer at the MTG Deals booth was thoroughly impressed with my preparedness, and for knowing some of their buy prices better than he did! Onlookers also expressed their interest in this spreadsheet. 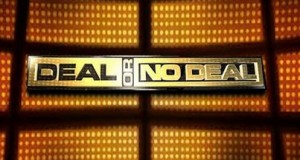 MTG Deals didn’t give great buy prices on everything. Some of my played Duals were knocked down more than I would have liked due to condition. Each time they offered me a value below my expectation, I simply wrote down the number they offered and politely declined.

It was tempting to simplify the process by accepting all their offers. But here’s a well-known fact: many dealers don’t have a full stock of Dual Lands available at all times. Therefore, some dealers may be willing to pay more than others.

What’s more, many dealers scrutinize card condition differently. What may look MP to one dealer looks SP to another, and so on. Not only is there no obligation to accept an offer, but it’s actually wise to decline anything you’re unhappy with. There is very little cost to writing down the offers you’re declining and moving on. You can always come back a little later to take their offer.

When it comes to buying and selling Legacy staples in person, stores no longer operate in the NM/SP/MP realm. There were some cases where dealers offered me four different prices on four copies of the same card. Many of the dealers had up to five different prices for a card. For example, I saw one dealer with Force of Wills for sale at $100, $95, $90, $85, and $80 all based on condition. My advice: treat your valuable cards very gently. A single scratch on a Legacy staple can literally cost you $5.

Dual Lands specifically had an enormous spread: I managed to sell three of my Underground Seas for NM price, but MTG Deals offered a full $20 less for my fourth copy, which I felt was NM- at worst!

Rather than take an offer I wasn’t thrilled with, I showed the Sea to Strike Zone. Interestingly, they also didn’t consider the card NM. I was offered around the same price as what MTG Deals could offer. Did I throw in the towel and accept the disappointing price?

I cannot emphasize this point enough. Dealers have somewhat arbitrary buy prices on so many cards. With the rapid fluctuations these days, it’s so difficult to stay up to date on everything. There is no harm in providing a counter-offer, possibly alongside citing what other dealers are currently paying. It works.

In the case of my NM- Underground Sea, I countered with a number $10 higher than his. Initially the buyer passed, but he came back to it and asked another staff member how many they had in stock. The number was quite low for a dealer – likely single digits. He proceeded to take the card out, accepting my counter-offer. The result: I obtained a price very near top NM buy price on mtg.gg without the fees and shipping – a worthwhile endeavor. 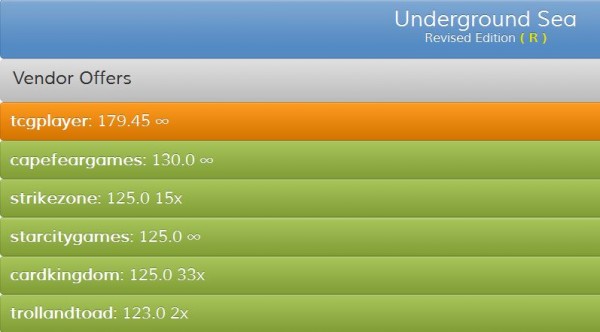 I went to Strike Zone second because they had many higher buy prices on mtg.gg, on average. But even after their booth I still had some significant staples remaining in my binder. My job was not complete.

The beauty of large events like Grand Prix is that there are so many vendors close together in competition with each other. Every vendor has a different local metagame and therefore every vendor has different quantities of cards in stock. This may not apply on Standard staples like Voice of Resurgence – copies are sufficiently available and every dealer has the same price. But on older, rarer cards local supply/demand can yield large variations in price.

I sold to no less than five vendors before my selling was finished. Each one had some higher offers and some lower. Naturally I sold the higher offers and declined the lower ones until the cards were gone. By being persistent and running through the dealer gamut, I managed to extract as much value as I could from my collection.

This experience taught me a great deal. I was very pleased with how my advanced research gave me a significant leg up on the dealers I interacted with. There were multiple occasions where the dealer cited me a lower price than advertised on their site. I kindly pointed this out to them and they often matched the online price. Everyone is human – no dealer can remember all their numbers for every condition of every card.

With some larger ticket items, the condition of a card has such a profound impact. But condition is somewhat subjective, meaning some dealers will view the same card differently from others. This leads to different buy prices offered. Any spread in buy price implies you can invest a little more effort to maximize your cash – down to the last dollar.

Here are three surprises I experienced when attempting to sell cards to dealers.

18 thoughts on “Insider: Five Tips to Maximize Sales at a GP”