When I was a fledgling Magic player I didn’t even know what the Pro Tour was. I knew tournaments were cool, but I also didn’t have any transportation to enable my participation in them. The nearby LGS didn’t hold events, and this left me out of the competitive scene.

The only time I read the about results of high profile events like the Pro Tour and Grand Prix was when I picked up the occasional InQuest Magazine. This was typically one to two months after the event itself.

Needless to say, MTG finance was a bit different back then. And for me, it was nonexistent.

Times have changed. Now there are rumors and legitimate leaks about what Pros are playing at a major event even before round one begins. That’s precisely what happened with Master of Waves.

Sadly, I was trying to follow an alternate path for speculation. I correctly latched onto the devotion mechanic, but I had focused my funds on Heliod, God of the Sun and Nykthos, Shrine to Nyx. The former has thus far been a bust, but acquiring fifteen Nykthos for $3.50 a copy has paid off well thus far. It turns out that devotion is as good as I thought--just not in white (yet).

The result: I now have nearly 20 copies of Heliod, which I either have to move for a small loss or sit on in anticipation for some powerful white devotion cards in the next set. As for Nykthos, that one will pay off nicely at least, perhaps balancing on my losses from Heliod.

Overall my 50% success rate isn’t terrible as long as I bank more profits on Nykthos than I lose on Heliod. But to be honest, I’m walking out of this Pro Tour with a sour taste in my mouth. After two weeks of SCG Standard events giving us ideas for speculation targets, the Pro Tour jumped in a significantly different direction.

What happened to the likes of Advent of the Wurm? Where are all the Boon Satyrs? Did people even play these cards? Probably, but I didn’t hear anything about them on Twitter. All I heard about and watched was a blue devotion deck and a green-red devotion deck tear up the Pro Tour. While Thassa, God of the Sea has jumped from $12 to $25, Boon Satyr has pretty much leveled out.

This brings me to the title of this section: speculation has become difficult these days. The instantaneous flow of information is a direct cause.

If you plan to maximize profits from speculating on a new set after rotation, you basically have to drop everything and monitor event results from the get-go. Also, make sure you cancel any social events or travel plans the weekend of a major event early on in a Standard season. You’ll need to be at your computer making purchases.

Even if you manage all of this, you still have to overcome the hurdle of selling cards once they arrive. Buying Boon Satyrs at $3 two weeks ago was still a good move, as long as you’ve since received the cards and flipped them immediately. If you try to list them on eBay now, you may be disappointed with how slowly they sell. I’ve seen sets of Nykthos sell every hour, while I’ve been watching the same set of Boon Satyr for a few days now without a bite. Turns out, someone has listed sets cheaper.

For Theros, I promised myself I’d take some additional risks with MTG Speculation. Too often I keep my speculative buys to a measly eight copies, only to kick myself when I successfully double up. This happened to me with Huntmaster of the Fells // Ravager of the Fells and Craterhoof Behemoth.

So this time around I increased my exposure when rotation came around. I took much of my recent proceeds from profiting on Return to Ravnica stuff (which are likely peaking soon, by the way…do you really see Jace going higher still?) and moved them into M14 and Theros cards. That’s what I wrote about last week, in fact.

In hindsight my strategy only half-worked. I did my best to latch onto the hot deck of the week, only to witness many of the successful cards from one week fail to make an appearance in the next. After all the hype on Ashiok, Nightmare Weaver the first weekend of Standard, it was shocking to see zero blue decks Top 8 SCG Cleveland. In Cleveland Boon Satyr and Advent of the Wurm got positive press. Nylea, God of the Hunt was also a smashing hit thanks to the mono-green deck. Yet, I see so little mention of these cards during the Pro Tour.

From these experiences trying to beat the system despite hundreds of others attempting the same thing, I learned some valuable lessons. In no particular order, the lessons are:

1) Avoid the temptation of blindly buying into hyped cards week one of a new Standard format. Always consider the long-term viability of every strategy before buying. Even if you can still react quickly enough to acquire a hyped card cheaply, the risk that the card will become forgotten one week later (before you even receive the cards) can still be high.

2) It is often wiser to speculate on cards with significant playability in multiple decks. Rather than go deep on a card like Advent of the Wurm which fits nicely into a specific archetype, it is wiser to buy into robust cards like Nykthos, Shrine to Nyx, Mutavault or Scavenging Ooze. Nykthos works with any devotion deck and Mutavault will be played in most single- and two-colored decks.

3) Speculation on the devotion mechanic and the gods was largely the correct play. I almost overlooked this mechanic completely after the first two SCG Opens of the new Standard. But I should have trusted Wizards--they do quite thorough testing nowadays and I find it highly unlikely they’d create a new mechanic only to have it be irrelevant. I don’t regret buying deeply on Heliod because I took a shot speculation-wise. In all honesty, who had their bets on Thassa prior to the Pro Tour?

4) Shocklands look unattractive to me right now, due to the popularity of one- and two-color decks.

As I write this article I’ve got many cards on their way in the mail, all purchases made during the Pro Tour and SCG Cleveland. Some cards I intend to move immediately because I’ve lost confidence in their staying power. Other cards I’m content to sit on for a longer period of time.

While I still have respect for the SCG Open winners of the past couple weeks, I’ve also become very weary of narrow cards like Advent of the Wurm. I may look to move those quickly once they arrive. Ashiok is another one I’m luke-warm on at best–-I’ve moved my two copies and I will plan to avoid in the short-term.

On the other hand, I’m perfectly content to sit on my Mutavaults and my Nykthos. In fact at GP Louisville next week I may seek to acquire even more of these depending on how high they shoot up. I’ve trimmed back my Scavenging Oozes, but I’m still sitting on 25 copies and I’m content with this number. I’ll trade them if I get a favorable price because upside is small in the short term, but I also know these have stabilized in price. I’m also relieved to see a few copies show up in the Pro Tour Top 8. 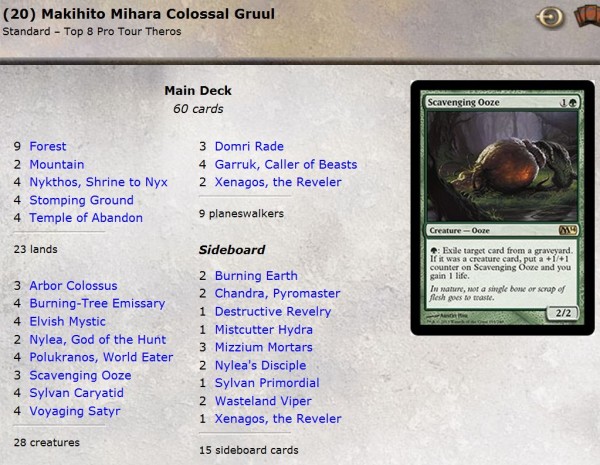 I also like this list above because of the Nyleas, which gives me hope that devotion to green is still solid moving forward. In fact it’s rather depressing to see that Heliod was the only god that didn’t enter the Top 8. Perhaps his deck just requires some more work.

Lastly, I plan on modifying my approach to how I speculate on Standard post-rotation. After the experiences of the past three weeks, I’ve learned more about the risks and rewards of speculating in this time frame. With instant event coverage it’s especially tempting to pull the trigger on every card that sits in the spotlight for five minutes. It’s absolutely critical I stick with the fundamentals before buying blindly.

Robust cards that can fit into multiple decks are safer to bet on. Of course if a Pro Tour Top 8 contains three of the same deck (Mono-Blue in this case), I’m more inclined to have faith in the strategy’s merits going forward. But there is still little reason to overexpose oneself to a single strategy when there are a handful of viable investment opportunities which do not mandate this risk be taken.

Next time around I’m going to buy 100 copies of the newest set’s “Nykthos”…once I identify which one that is.

I’m writing this article at 4:00 Eastern Time on Saturday. The Top 8 deck lists have just been posted to the mothership. Here are three hyped cards from this past weekend along with their TCG Low price and Star City Games price. Let’s see how much momentum these cards have once the Pro Tour ends by comparing these numbers with Monday’s.

19 thoughts on “Insider: What’s Next After the Pro Tour”