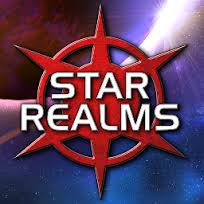 Maybe not in the way you're thinking, I can't dunk a basketball or win an election, but Obama started out as a community organizer, and that's a role we can all benefit from emulating.

I am getting really pumped for GenCon because I plan to play Star Realms as much as possible. For those who tune out when I prattle on about it, Star Realms in a deckbuilding card game designed by Magic Hall of Fame members Rob Daugherty and Darwin Kastle. I was a Kickstarter backer and promoted the game a heck of a lot. Now that the closed Beta for the electronic version of the game is going full swing and I can play against others on the internet, including mr Kastle himself, I am playing non-stop.

When my LGS owner posted on facebook that he had a lot of the game sets in stock, I got a brilliant idea- why not organize a tournament in the store? Lowish buy-in to encourage non-players to pick the game up, a discount on entry if you buy or bring a copy of the game to use in the event, some of my kickstarter rewards as prizes- the whole idea formed almost instantly. The store owner is super on board and now we're looking at a calendar to pick a good date for the event.

All of which lead me to ask myself- when was the last time I did something like that for Magic?

And how hard would it be? My LGS would be just as inclined to let me organize 2 Headed Giant Sealed, you know, the format whose passing I lament every opportunity I'm given. He'd let me set up infi proxy Vintage or Legacy or a weeknight just for funsies cube draft. I could even invite people over to my house to jam a draft. I haven't done anything like that in forever.

I talk a lot about the need to assimilate with different groups to have a larger client base and to get yourself in a situation where there is money to be made shipping cards between the groups. But I am finding myself relying on others for setting up EDH night and I mostly stick to the store event schedule. Organizing stuff is a good way to get yourself more widely known in your community and that can't be a bad thing. It's all a matter of bothering to do it. I've mae plenty of selling opportunities just by asking, maybe it's time to give something back.

Especially if that thing is 2 Headed Giant.

I just have two questions for you - first, what is your current favorite non-Magic game, why is it Hearthstone, and how do I convince you to make it not Hearthstone?

Second, what are you going to do to give back to your community?