Magic Online can get expensive. If you’ve ever been about to hop a draft and seen this screen you’ll know what I mean: 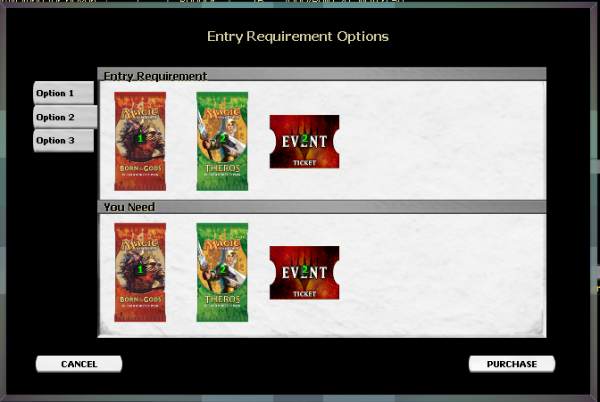 Where did the tix go? You reloaded just a week ago, and now you find yourself reaching again for your credit card.

Stop. It doesn’t need to be that way.

This column will focus on helping you, the MTGO player/speculator, get more out of your gaming dollar. The tips here will allow you, with some discipline and a modest investment of time and money, to “go infinite” on MTGO--i.e., never pay again to play the game online.

You’ll need a solid bankroll to start, which we’ll discuss in the next article. But even if you don’t want to go all the way, incorporating these tips will reduce the cost of playing and get more from your gaming dollar.

I’ve been playing since Ice Age and have now been relegated to the world of MTGO by career and family. I still enjoy a good duel, but don’t have time to grind queues or spend extensive time buying and selling.

My Limited rating hovers around 1775 and my Constructed rating around 1700, and nobody is going infinite with those skills. And yet, since I started last year I’ve built a solid Modern and Legacy collection and netted over 2,000 tickets by playing smarter and understanding the basic, and very predictable, cycles of the MTGO economy.

Future articles will focus on what to buy and when to buy. They’ll examine what queues to play so that you’re not spewing value, and how to manage the cards and boosters that you win. We’ll also take a closer look at the MTGO economy, what makes it tick, and how to make countercyclical plays that harness the regular ebbs and flows of the MTGO economy.

This article will start with the basics: your core toolbox. If you do nothing else, just adopting these tools and practices will reduce the time you put into collection management and the money you spend on cards.

Probably the single most useful web page for the MTGO player, this is an aggregator of prices from bots using MTGO Library, the most commonly used bot provider. Whenever I want the best buy or sell price on a card, I start here.

It does omit some of the key chains (MTGOTraders, Cardbot, Marlonbot, CardNexus, Clanteam, Goatbots, AcademyBots, Dojo), so it won’t always find you the best price, but it should be very close. Just by shopping around a bit you should be able to save about 10% on what you pay (or get) for your cards, which adds up fast.

Tip: Don’t worry too much about leaving credits on bots. I used to worry about this, always trying to close out with a credit of .1 or less. It was exhausting and a waste of time and of money, since I often ended up buying stuff I didn’t need, often at inflated prices, just to get to a zero balance.

As other MTGO writers have mentioned, it’s best to pick a dozen or so bot chains that you like doing business with and then see the credits you leave as a “subscription” to their services. If you leave an average of 0.50 tickets on 20 bot chains, you’ve basically purchased a subscription to these bots for 10 tickets–which will more than pay for itself.

This is a brilliant little website that tracks card value over time, giving you stock charts for these virtual assets. When you have a hunch about a card, don’t buy until you’ve checked out Mtggoldfish. It’s a great way to find cards that, for one reason or another, are out of favor and likely to snap back. We’ll discuss this more later.

One of the most useful features on Mtggoldfish are their “Indices” and their “Movers and Shakers”. Using these graphs it’s easy to see how a temporary increase in supply, for example from a flashback draft, can reduce prices, and how they generally climb back toward the previous plateau. Every day I take a quick look at the Modern “Movers and Shakers” to see what’s hot and what’s dropping.

Among the top losers you’ll see a number of Scars of Mirrodin cards that were just flashed back. You can then click a card name to look closer at potential targets: 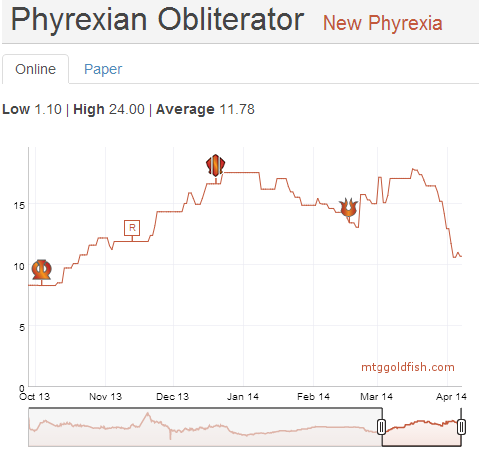 Obliterator is at its lowest point since October, and is a good candidate to bounce back during Modern season. Sword of Feast and Famine, Elesh Norn, Grand Cenobite, Koth of the Hammer, and Tezzeret, Agent of Bolas also make pretty good targets because their prices are pre-discounted.

I also check the Mtgotraders hotlist since it gives a pretty good snapshot of what’s in demand by the biggest player in the market.

MTGO Traders has gotten increasingly competitive in its buy and sell prices. It is a great place to buy cards because they are always in stock, have an easy-to-navigate website, and accept both PayPal and Event Tickets as payment. You pay a small premium for the convenience, but your time has value too.

MTGGoldfish’s Total Format Prices are useful too. They will show you the overall state of a given format, and the MTGO economy. 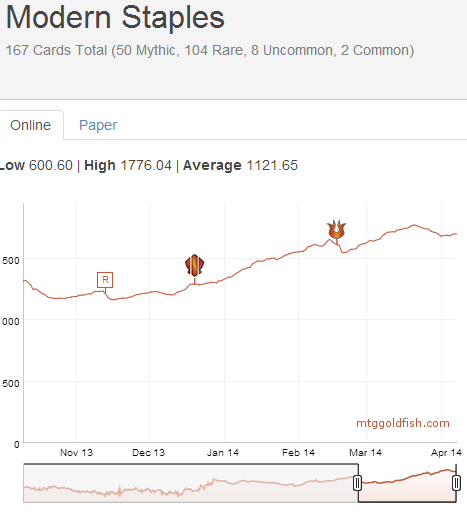 As you can see, Modern staples fell about 5% off their high at the start of April, in part due to the Cube events. Release Events and Cube events suck a lot of tickets out of the MTGO economy, creating a liquidity crunch that lowers prices on cards across the board. Things are starting to trend upward again, and as we’ll discuss in future articles it is important to be prepared for these opportunities.

This should go without saying, but check the forums frequently. There’s gold in them there hills. Your fellow QS members are some of the best resources for tips on possible specs.

When I first got started, most of my successful specs were about riding the waves of experienced speculators like Matthew Lewis, Sylvain Lehoux, and Sebastien Morin. As I got a little savvier, the forums were helpful in validating (or challenging) my hunches about specific cards and market trends. Visit them often and offer your contributions.

This is an MTGO feature that many people do not know about, but is useful for saving time when buying a bunch of specs or filling out a deck.

Let’s say you want to try out a sweet new list you saw 4-0 a daily. Just import the text file and load up the deck in your deck editor. The cards you don’t own will appear in red. Remove all the cards you do own, and save the list of “missing cards” as another “deck” (title that deck “Wishlist 4.11.14” for example).

Then, once in a trade with a bot, just click on the “Load Wish List” button (it’s at the top, right next to the Cancel Trade button). Voila!

That’s all for this week, but tune in next week when we talk about maximizing EV.

9 thoughts on “Virtually Infinite: Getting More from Your Money on MTGO”