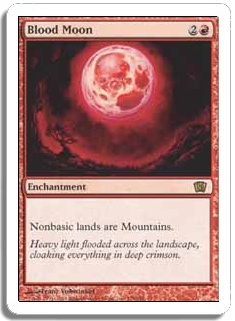 This story comes to us courtesy of /u/Toxygene on reddit.

Yesterday, at GP Minneapolis, I was playing Kiki-Pod against Affinity. After winning game one, game two was very close. I cast a Harmonic Sliver and destroyed his Arcbound Ravenger and next turn cast Phantasmal Image and had it enter the battlefield as a copy of Harmonic Sliver. I stated that two destroy artifact/enchantment triggers were going on the stack. He asked why and I realized that I didn't actually know why... I just knew I had seen other people do this. We called a judge and he ruled that I got one trigger. I appealed the ruling and the head judge ruled that I got one trigger. I used the trigger to kill a Cranial Plating and swung. That put him in range of death from another attack next turn, with me safely out of range. He top decked a Cranial Plating and swung for lethal. I was trounced in game three and I dropped with a 3-3 record.

Today, I looked up the rules for Harmonic Sliver and I believe the judges ruled incorrectly. My Phantasmal Image should have acquired the Slivers gain destroy artifact/enchantment ability and this ability is cumulative with the other Harmonic Sliver, giving me me two ETB triggers.

Am I correct here? If so, who should I contact about this? I'm not looking to have my record changed or anything, but I would like the judges to be informed about the mistake so it doesn't happen again.

EDIT: I jumped onto Ask A Judge chat (http://chat.magicjudges.org/mtgrules/[1] ) and one of the judges stated I get two triggers because the second Harmonic Sliver (Phantasmal Image) should read:

EDIT 2: I sent an email to the tournament organizer outlining these details. He has forwarded it to the head judge.

Sometimes you are at a small event with only one judge and their ruling, correct or otherwise, is final. You have no appeal rights and the only thing you can do is kick the matter up the chain when you get home.

Even worse, sometimes you appeal the floor judge's ruling and the head judge also makes a mistake. It's rare but it happens. There are some ways you can protect yourself.

If you have an interaction that is questionable like the sliver ruling, either go on "ask a judge" chat (link provided) and get a ruling. Print out a screenshot of the ruling and bring it with you. It may help you if the judge is confused if he has verification from a level 2. A printout of the relevant rules that pertain to the interaction are also handy. Judges have to keep a lot of info in their heads and it is much easier on them if they can interpret the relevant bit of rules text rather than trying to extrapolate from their knowledge of Magic rules as a whole. Judging can be confusing. Remember they're only human.

If you do lose on appeal, don't let it tilt you. There is literally nothing you can do about it at that time, so all you can do is try to keep calm and not let it ruin your play. You will have to go through the event appeal procedure here.

Remember, you can't argue with the head judge. Even if they're wrong, their ruling is final. Keep calm, appeal through the DCI channels after the event. I watched a guy yell at a judge and threaten to quit Magic over a ruling about Blood Moon and Urborg, Tomb of Yawgmoth. No one won there. I think the guy made good on his promise - I haven't seen him since. Don't let that be you.

4 thoughts on “Know your deck!”