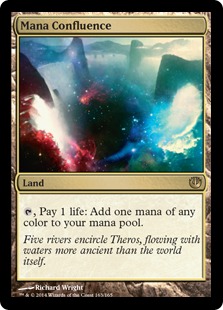 I know some of you are familiar with the Market Watch series I’ve been doing on www.empeopled.com, but for those of you who may not be, each week I try to look at one particular card and break it down as either a good or bad speculation target.

This week I wanted to do something a little different, so rather than come out and call one of the most HYPE TRAIN new cards, Mana Confluence, I decided to ask a different question: Where will Mana Confluence settle at?

There are, of course, a ton of factors that go into this question, and I did my best to address them all when I came up with an answer.

Mana Confluence could easily be this year's Voice of Resurgence. It's not a direct comparison by any means, but what I mean is it's a sought-after card
in a third set that is drafted in small numbers and won't even last until the Core Set because there's another drafting set on the way fast. Last year it was Modern Masters, and Voice has refused to drop to $20. This year it's Conspiracy, and Mana Confluence is (importantly) a Rare, and $12 right now...

You can read the full post here. What do you think? Where will Confluence end up?