I was in Dayton, Ohio. You ever been there? Yeah? You know what’s a fun thing to do there? Pack up and get the fuck outta there.

-Dave Attell, Skanks for the Memories

Why do people in California play Magic?

I realize there are nerds everywhere and nerds like nerd activities like playing video games, reading books and pretending their pillow is a woman, but how does someone in a beautiful, temperate climate waste all that nice weather inside playing cards?

Michigan gets buried in snow half the year, Nevada gets so hot the pavement on the highway melts and Utah has Mormons everywhere. The East Coast gets pummeled with more hurricanes than a Serra Angel in 1994 and got buried with so many snowstorms this winter that children in Maryland are still in school this week. Buffalo, New York gets more snow than any other city in America and when it thaws the Bills and the Sabres still suck.

It sucks to live a lot of places. It doesn't suck to live in the parts of California that aren't prone to forest fires and mudslides and earthquakes and violent crime. Are there parts of California like that? Regardless, they can go surfing and wear shorts 365 days a year and randomly encounter Paul Giamatti buying Endive at Trader Joe's and the rest of us should be jealous.

With all that, why would you play Magic? I guess it's because Magic is fun.

Those Who Don't Pack Up and Move

The American Midwest is a veritable breeding ground for Magic Professionals. Michigan, Ohio, Indiana, Wisconsin and Illinois seem to produce pro players by the bushel.

I bring up  Southwest Michigan a lot because I think this region is producing future professionals at an alarming rate. First, Ray Perez Jr. broke out and has been on a tear since, smashing PTQs and GP Day Twos. Right on his heels, his former teammate from Team Perfect Storm, DeShaun Baylock set out on his meteoric rise. Recently, another West Michigan player stomped the competition in Chicago.

Jadine Klomparens was on the brink of being the first woman to win a Magic GP (can that possibly be right?) this weekend. A woman from my area not winning after making it so close was about as anticlimactic and exciting as the finals being between Mono-Black and decided by the dice roll and mulligans. Personally, if Jadine hadn't gotten there, I would have preferred it would have been by losing in Game 3 to Adrian Sullivan, but you don't always get what you want.

There are plenty more players in West Michigan poised to break out and do big things. As soon as Tristan Woodsmith is a little bit older and can travel a little more freely, he is going to do big things in Magic. He reminds me of a young Kyle Boggemes, and Kyle is a guy who can take nine months off and win a GP he played on a lark.

Speaking of Kyle Boggemes, he's part of the "old guard" in Michigan--a member of Team RIW which is an institution in the area, bringing us dozens of pros and future hall-of-famers. West Michigan is nipping at East Michigan's heels and it will be interesting to see how it all shakes up. It's good to live in this area, that's for sure. 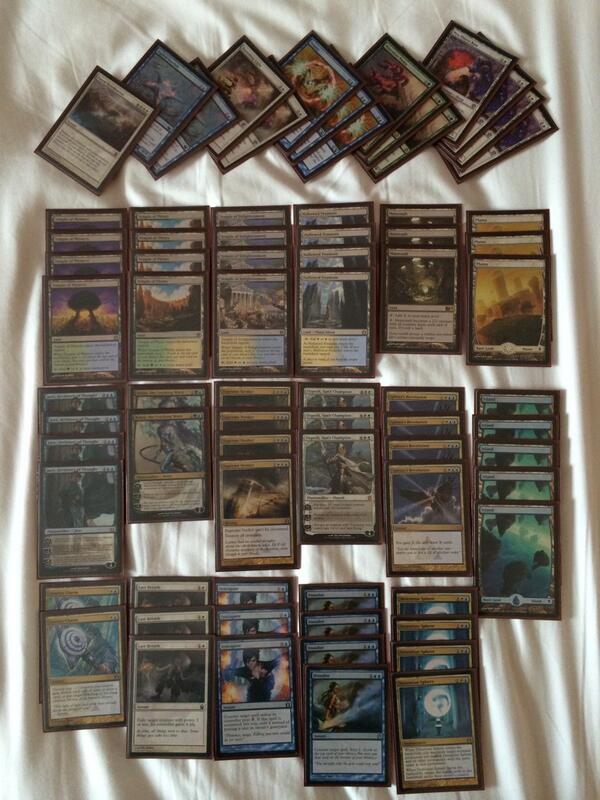 Following Tomoharu Saito on social media is a good deal sometimes. This deck is no secret now that he took 12th at the GP with it, but Saito tends to post lots of decks. This is especially good when a set first comes out.

In addition to his own brewing, he posts decks that are doing well at his own shop. This is incredibly instructive when a new set has just come out and the metagame is unclear. Hey, a few sets are just about to come out, aren't they?

Also instructive is the stream of FNM from his card shop. I'll peek at it every once in a while. Some decks that do well there are "whiffs" like the U/W aggro deck with Karametra, God of Harvests but some good tech has come out of there, too.

Saito is more than happy to let the world know what he's on and the stream of his store's FNM is not exactly a secret, but it's underwatched for how valuable it is. It airs hours and hours before American FNM, also, so don't miss it. 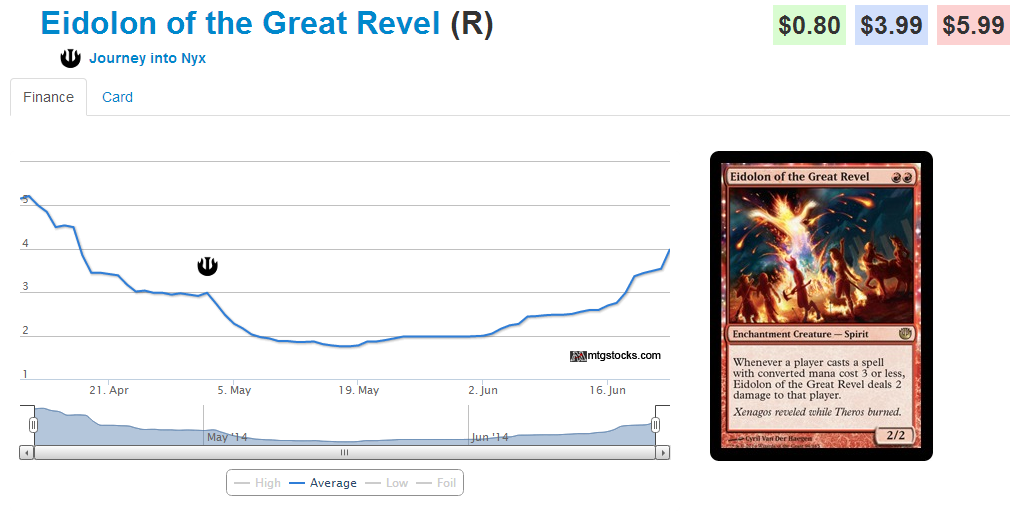 Get these while you can. There has been real movement on these, but TCG Player is slower than shops due to the disparate number of sellers making it harder to buy out. Get your copies. Get them. It's too late to buy at the floor, but if you need these to play with, you'll only pay more if you wait.

I'm not sure how to feel about the foils, but I know we'll want the non-foils going forward, and I bought quite a few when I was shop crawling this week. I think there is real growth potential, and being up $1 in a week seems to jive with that.

4 printings of this hasn't deterred its upward movement, and this is the second consecutive week of growth. Useful mostly in EDH, this card is very powerful and has a nice mana cost. I like trading into these, but who has these for trade? I think someone is going to say, "Screw it," and spend $300 to buy out TCG Player. I'm not advocating that because these will catch up to the Unlimited printings, which will in turn cause dealers to decide Unlimited is too cheap.

This card is never getting reprinted and isn't splashy enough for an FTV or something similar. This is just a solid EDH card that is seeing growth associated with its finite supply, real demand and unreprintability (my dictionary doesn't believe that this is a word).

I don't know how much cash I want to throw at these guys, but I think this is likely a $10 card in a year with a $15-$20 Unlimited counterpart. Don't buy too many of these and start an avalanche, but watch them. If you see these in a trade binder, I'd go for it, but I think these are mostly in display cases and 100-card decks, and that's where they live.

Conspiracy just gave us another artifact general in Muzzio, Visionary Architect, and even people who have Copy Artifact need another one. EDH decks don't get torn apart. We just buy bigger boxes for our decks. a one-of format can matter as much as a four-of format if four or five decks all want a Copy Artifact. I like these long term.

I don't like these for cash, but I love to trade for these. People value these at about $8-$10 and I'm fine trading for them even at $10. If Food Chain can hold $20 after it went up for no reason, steady EDH demand is going to make this card go up and up.

With a new Ob Nixilis being printed, Mono-black is going to get a kick. I think cards like Contamination and No Mercy are solid picks as well. Non-mono-black decks jam this powerful enchantment as well. We've seen two weeks of growth on this guy, too, and I think it's a solid trade target.

If you want somewhere to park cash, look for cards like the ones I mentioned that may go in the same deck. Maralen of the Mornsong seems like a good place to park the new Ob Nixilis and that deck can be run a few ways. The 80-swamp combo version doesn't have a lot of opportunity, but some of the other versions have good targets.

If you look at the price of Vigor you get a good idea of the potential ceiling of Dread. I am really bullish on this guy. No Mercy is a solid gainer as well, and people undervalue Dread as much as they overvalue Guile and Hostility.

I realize that I am calling a lot of EDH cards this week, but EDH has no seasons. It has no rotation. It has no big events. These cards don't really spike based on anything other than new cards coming out and making new decks possible. There is no metagame, there is only what new decks can be built.

Stay abreast of EDH and you have lots of solid gainers. Rising tides lift all boats, and a new deck can make 99 other cards go up just by virtue of a new card coming out in Conspiracy or M15. A lot of wacky EDH stuff is moving up.

Pay special attention to stuff older than Mirrodin. There are so few copies of those cards that it takes little provocation for real, serious price spikes. Cards tend to not go down once they've gone up lately, so try to be ahead of the game and anticipate what the next big thing will be. If there is a local EDH playgroup and you can't bring yourself to play with them, at least ask them what they want to build with when the new sets come out. You can end up supplying them with cards and they can supply you with cards to target.

That's all for this week. I'll be back with a more substantial article next week, but until then, fill the comments section with stories about your geographical location's metagame, the name of the first woman to win a GP, cards you're targeting based on new potential Commanders in M15 or whatever you want to sound off about. Until next week.